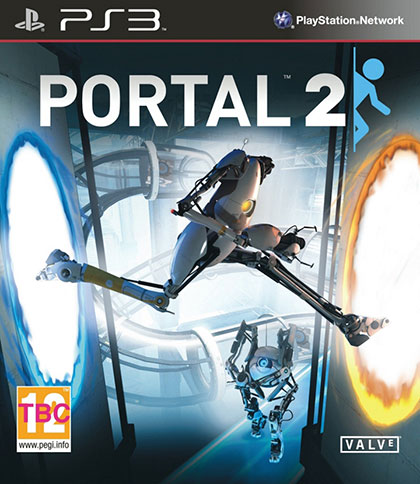 It is now time to enter the hellish world of torture and demons, oh and welcome back to Aperture Science. Portal was one of those games that made everyone strike a brain cell and solve miraculous puzzles with the second best gun every created, the portal gun. Throw in some cleaver dialogue, increasingly harder puzzles and some missing cake- you have yourself a game of the year. Portal was released as part of the orange box with Half Life 2: Episode 2 and Team Fortress 2, and portal was a safe bet to see how this kind of game would react in the gaming industry releasing with the other mega franchises. Now portal 2 is finally here and a game of its own. With clever writing, voice acting and characters, mixed with a dash of new puzzle elements, much more intense puzzles and a new co-op feature- Portal 2 is a fun lengthy game that is arguably one of the best games of all time.

After diminishing the evil Ai GLaDOS and blowing up the facility of Aperture Science Chell (the main character aka you) has been dragged back into the facility for some unknown reason. But the Evil Ai has been dead for some time and after a quick introduction of looking at what is called… art you are introduced to the laughable and best character in portal 2, Wheatley the round version of a talkative and funny companion cube. After breaking (literally) of your confinement Wheatley tasks you to find the portal gun and proceed to escape the facility. After some tutorial stages to help you understand or remember the portal mechanic. Wheatley decides to take of his rail and travel with you to escape but it all goes wrong when you go through “her” chamber. Looking for that elevator switch to escape Wheatley manages to power up “her”. And in seconds GLaDOS reawakens to find her murderer standing before, and this starts the second cycle to defeat GLaDOS once again. 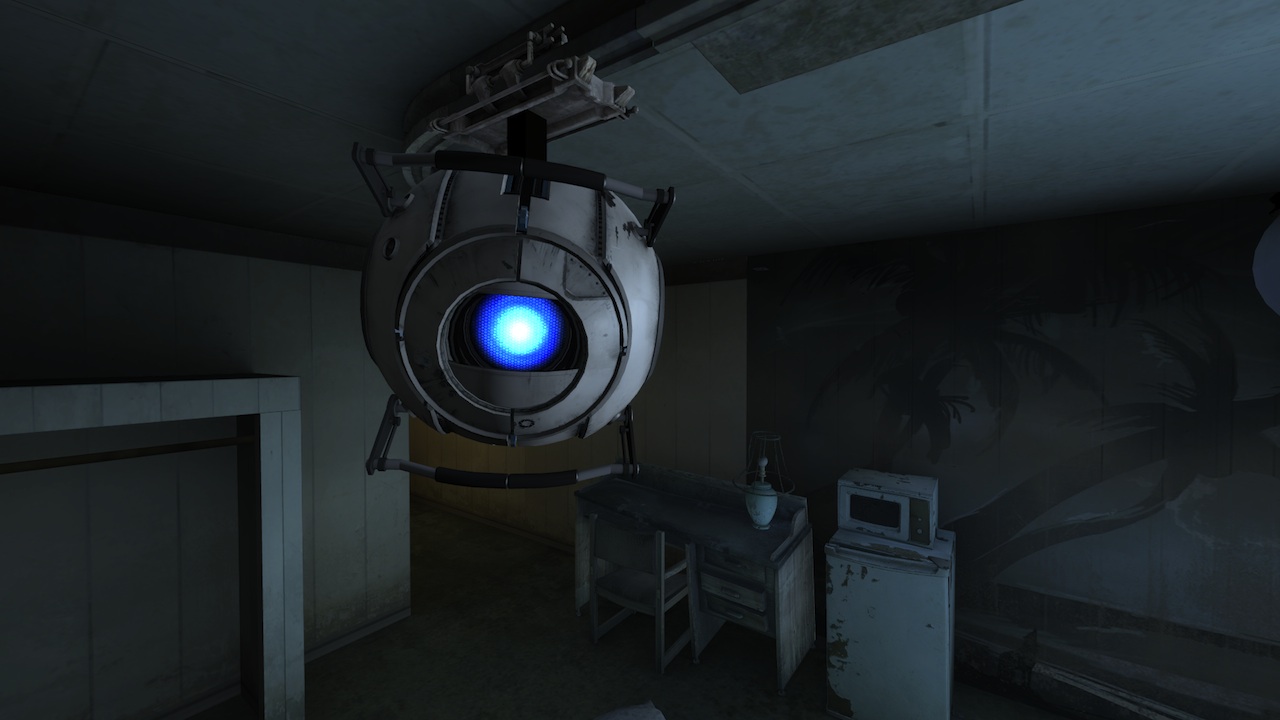 Valve’s games have always been all about the story, voices and characters as the player never speaks. The ever funny yet murderous personality of GLaDOS still raises a few smiles and chuckles and is again voiced by Ellen McLain. Cave Johnson is another great funny character voiced by J.K. Simmons and does a great job. But the standout, the star and best character in Portal 2 would have to be Wheatley. Voiced by Stephen Merchant from the Office, Wheatley is a witty character that is fun to see and listen too. Voices and character aside the story itself is well written. Not giving any spoilers but Portal 2 expands on the unknown Aperture Science in a way no one can see coming.

Portal fans will have to go over old grounds such as relearning the basics of the portal gun, which is a great paced learning curve for new comers but the test chambers all look run down and full of plants, so you even notice it’s the same. Most if the facility is in this sort of decay which is a very unique way of using the source engine. Although almost a decade old, the source engine still looks good by today’s standards. Shadows have more detail, the physics still are reliable and the game still has its charm of the Half-Life 2 standard. The murky water looks more deadly than ever and the cubes themselves get a nice loving upgrade. 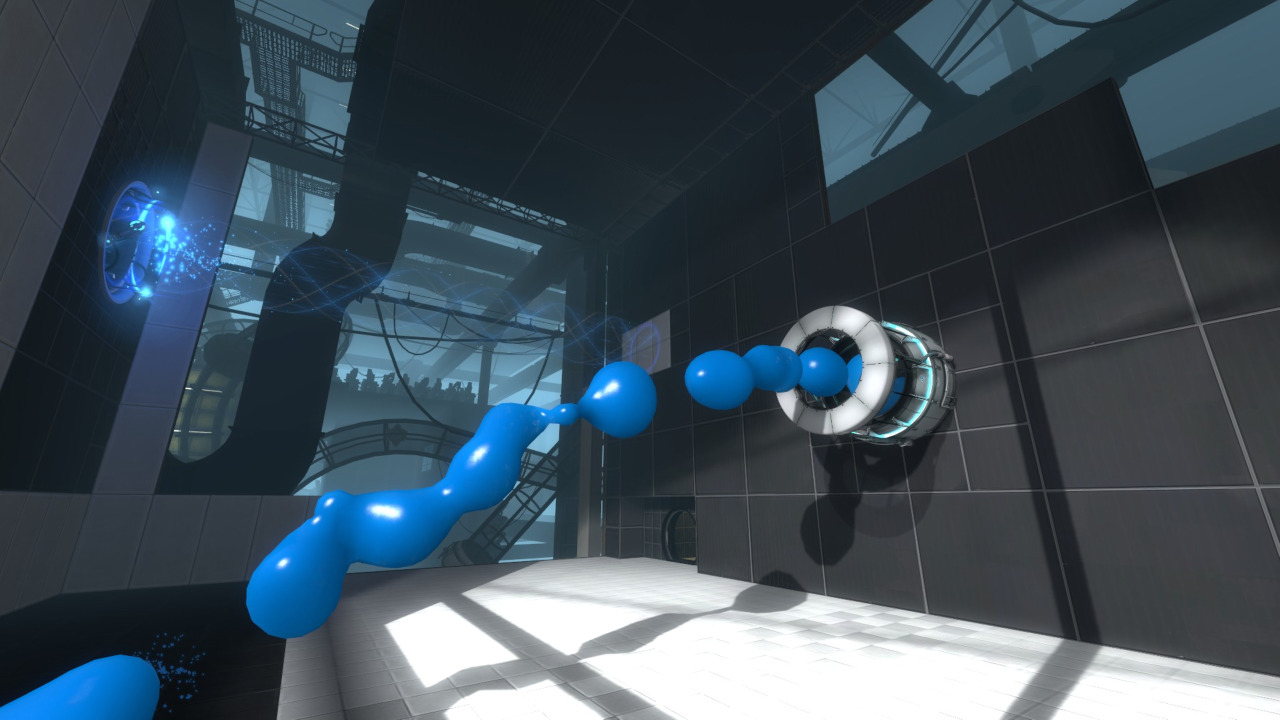 And by that standard there needs to be lots of innovation to make it a proper valve game. And there is; new mechanics and even harder puzzles. With your nifty portal gun there are three new paint-like gels which are introduced just after half-way in the game, that aid you in different and unique ways explained in a nice tutorial by Cave Johnson. The gels come out of a tube and splatter the surface of the floor utilizing that gel’s unique ability. Of course you can use your portals to move them elsewhere. The first gel is blue and is called the Repulsion gel and it is sort of a bouncy gel. When Chell jumps on the gel she gets repelled back up like a trampoline and of course the higher you jump and more momentum you gain, the higher you bounce off the gel. The next gel is orange and is called the Propulsion gel which increases your running speed as you run across it. Again this gives you momentum and is used it many unique ways in puzzles. The last gel is Conversion gel. Don’t like how there aren’t enough places you plot your portal on? Well the conversion gel creates the white surfaces that allow that and the uses are infinite! Of course using the conversion gel is the gel needed most as you won’t be able to place many portals later on, so that gel will become heaps useful. Now, combine all those gels with physics and your portal gun- and you get hard intense and brain eating puzzles that no one has ever seen before. Of course there will be moments of frustration and “what am I suppose to do” but solving the problems feels like your getting smarter or saying “OMG, that is what I had to do :(”.

Portal a testing game was only a couple hours long and length was the major issue among gamers for the game. Portal 2’s single player is about 3 times that. Taking about 6-9 hours to complete- of course this depends on a lot of variables for the player- for the single player the co-op itself is another 5 hours. So in total the game would be about 12 hours, a much longer game. But the issue here is that once those 12 hours is over with the game has nothing more to give. There is a developer’s commentary which could add another few hours but the game doesn’t have any challenges from the first. Valve has stated DLC will arrive but for now the game’s replayability is not too high. There will be some people who would like to play the game again for the puzzles or for the great story and dialogue. 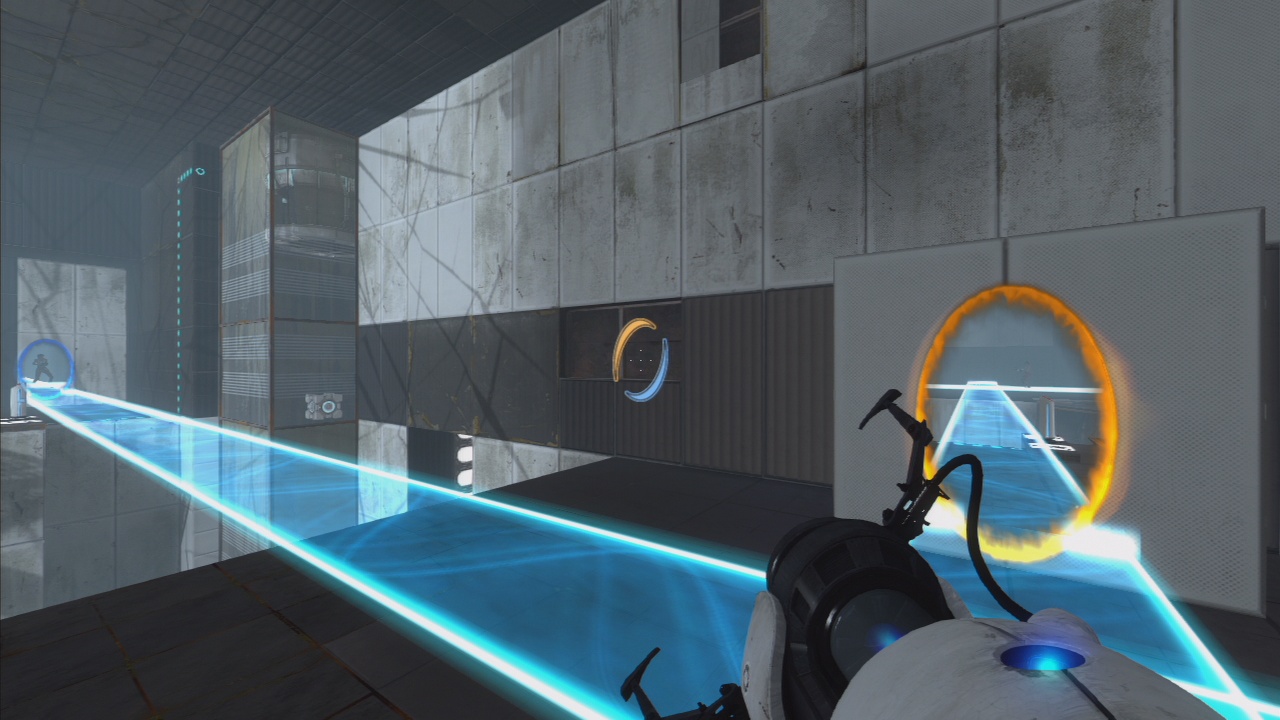 Set straight after the single player is the co-op, the most fun part. Teaming up with your friend on split-screen, online via steam (PS3, PC and MAC only) or just with some random people to take on tougher test with either P-body or Atlas. Using the same gels from the single player, this will be a fun and sometimes frustrating game if you don’t have a friend that listens well. The PlayStation 3 version has integrated Steam which means you can play with some Steam buddies, plus each copy of the PS3 version gets a code for a PC version, neat huh? 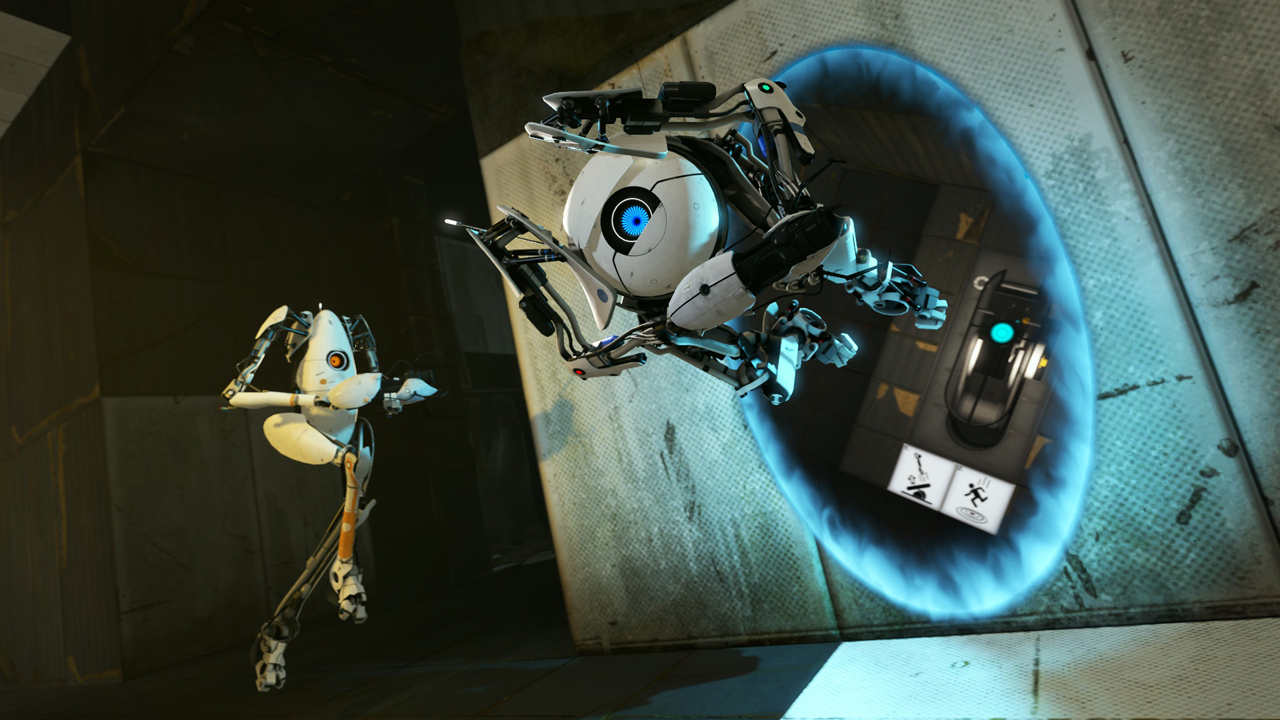 Aside from that, Co-op is a blast in Portal 2. Solving problems side by side, creating problems for each side. The best thing is how user friendly it is in co-op. Players are given pings to help point out the way for others, labelling where to place portals, points of interest or speedy things. Gestures are a major way to express your feelings, have a momentous high-five after a super hard test chamber or playing some good old rock-paper-scissors. This all enhances the co-operation and makes the players become one as a team, or destroy it completely. GLaDOS also appears in co-op to break down your winning team with witty and sometimes harmful remarks to drive P-Body and Atlas away.

The puzzles are very similar to the single player but the big thing is that either person can enter each other’s portals. This means twice the portals and twice harder puzzles. It will be much easier if both players have played a reasonable amount of the single player but of course tutorials are in the co-op for those who just aren’t into getting smarter. Of course since the gels make a comeback and with multiple portals, things can get a bit hectic and crazy with many time based, and logic based puzzles. The co-op in Portal 2 is fantastic, and since the PSN is up- DLC will be coming soon. 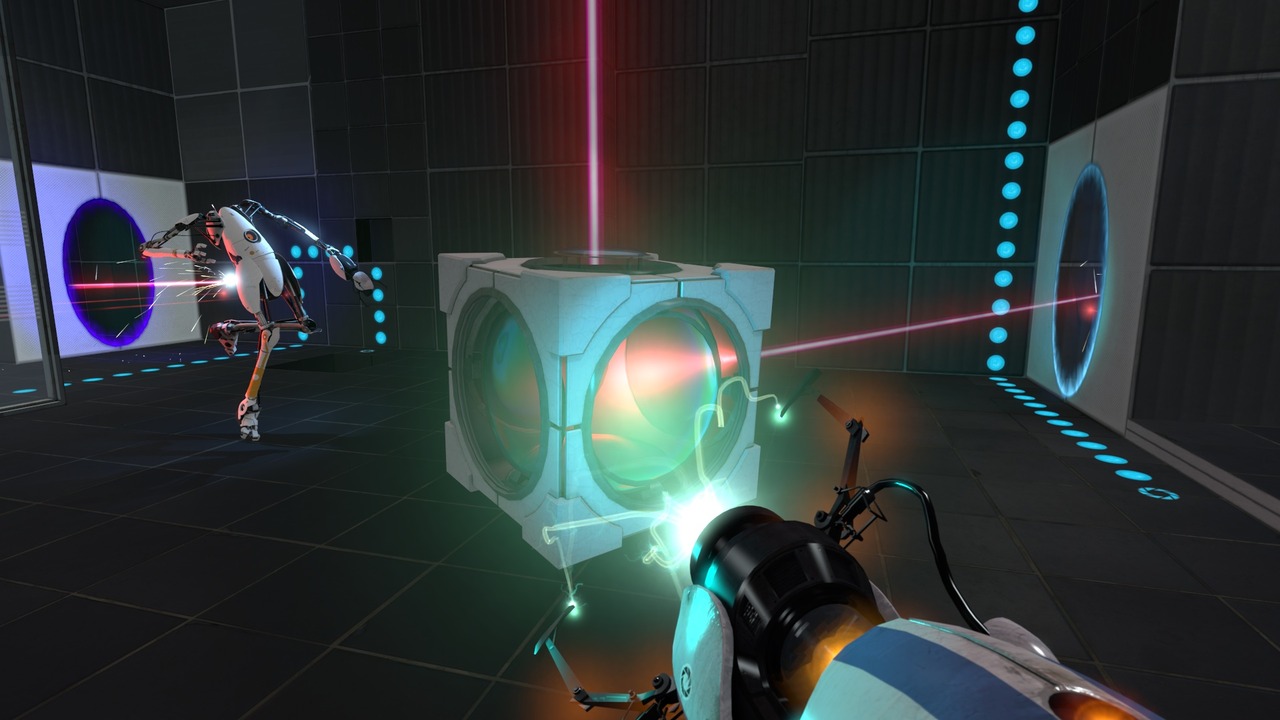 Defying the impossible again, Valve puts in a great finish product for Portal 2. It’s witty, funny, hard and great all at the same time. Portal 2 boast some of the best voice acting to date, with unmatched writing, a great Co-op system and a companion cube. Although having almost no replay value after completion, Valve has slated for some free DLC. Quit thinking with maths and start thinking with portals.