Everyone knows how Hideo Kojima likes to troll hiss fans about his beloved series Metal Gear Solid, and last year at the VGAs a rather intriguing trailer poped up by the name of The Phantom Pain. Developed by Moby Dick Studios and headed by Joakim Mogren, the trailer looked somewhat familiar. Many (almost everyone) has suspected that the trailer is somewhat related to Metal Gear Solid Ground Zeroes, and Kojima himself revealed at GDC 13 that the next MGS game will be called Metal Gear Solid V: The Phantom Pain.

At the GDC 13, at a special press conference, a strange man appeared wrapped in bandages, who previously appeared as Joakim in an interview. But what a surprised that he was actually Hideo Kojima! Sarcasm aside,  everyone was expecting a relation between The Phantom Pain and Ground Zeroes, but what they got was something more drastic and more mind blowing. 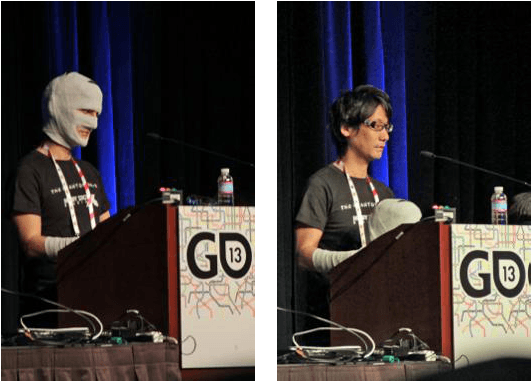 At the GDC conference Hideo Kojima has confirmed that The Phantom Pain is indeed Metal Gear Solid V and that Ground Zeroes will be the prologue. On top of these revelations, Kojima has aired a new trailer of MGS V as well as gameplay, and new footage and demonstrations on the FOX Engine, which the new game will be running on.

So check out both the Metal Gear Solid V: The Phantom Pain trailer and gameplay videos, and be sure to watch in 1080P!

Of course you must be very excited and confused at the same, and so am I. Not much can be extracted from the trailer and gameplay and Kojima likes to keep his story under wraps and as convoluted as possible from the public. From the trailer you can gather a couple of things:

• The Phantom Pain will be set 9 years after, what we assume is the,
• Big Boss is in a coma and after a large scale attack on Motherbase (from Peace Walker),
• Big Boss will recover in a hospital where it is once again attacked,
• Other characters like Miller and a young Ocelot make an appearance,
• Big Boss seems to be wearing prosthetics and a horn at the end.

We can also tell the quality of the game from the gameplay and trailer, showing how powerful the FOX engine will be. Of course, there is much, much more to gain from these too videos but most of it is out of context.

The Konami PR has also confirmed that The Phantom Pain will be coming to Xbox 360 and PlayStation 3, while information aboutGround Zeroes and next-generation consoles is unknown. The FOX engine itself was designed for next-generation consoles so things are still quite confusing. In a recent interview at GDC Kojima has stated many things about MGS V such as:

• MGSV will be a different experience than other MGS games, won’t be traditional stealth,
• He wants to reinvent the series with MGSV, hence using the roman numeral instead of numbers,
• You’ll only play as Big Boss,
• He goes into limited detail about facts we already know, such as open world gameplay and day/night cycles, and
• The Phantom Pain will be set in around 1984.

Also on the weird front is that David Hayter, the voice actor of Solid Snake from Metal Gear Solid, Sons of Liberty and Sons of the Patriots, and Big Boss from Snake Eater, Portable Ops and Peace Walker, will not be voicing in The Phantom Pain, none at all. Many fans have gone up in arms about Hayter not voicing Big Boss in the game or even possibly a young snake, even to create a petition to bring him back. Big Boss will most likely be voiced by Richard Doyle, who voiced the old Big Boss in Metal Gear Solid 4.

Kojima has also introduced lots of new information and tech demos from his FOX Engine, which The Phantom Pain is running on. From a gamasutra article on the FOX Engine presentation:

“The FOX engine creates 3D character models by using PhotoScan on photo-real sculptures, with the help of special effects makeup and Softimage. Textures are generated from the original photos, so they match the 3D model. They can be generated automatically from the reference image by PhotoScan, applied and then hand-tweaked by the artist afterward. The result is incredibly detailed wireframes that are faithful to the original model; it’s almost impossible to differentiate the photographs shown in the presentation from images of models rendered in the engine. Photorealism and lifelike light behavior are major area of emphasis; deferred rendering’s employed to support a high number of lights and give 3D objects and characters a consistent look.”

Now everything is rather confusing and not set in stone but that pretty much the gist of all the main information regarding Metal Gear Solid V and its two games: Ground Zeroes and Phantom Pain. Kojima has stated that Ground Zeroes will come first.

There is currently too much going on about Metal Gear Solid V so lets leave it at that. The Phantom Pain will be coming out on Xbox 360 and PlayStation 3 sometime in the next year and a release date and list of platforms that Ground Zeroes will be on has not been specified yet. Whether or not the games will appear next-generation is still unconfirmed but the main game will be in two separate parts. Both of which could be without David Hayter.