Update: We reported the date incorrectly. The two part finale will be airing this Fall/Autumn, with a rebroadcast of the first season this July.

The official website of the Buddy Complex anime adaptation has announced that a new anime project will be airing this October. It will be a two part finale to the series, titled Buddy Complex Kanketsu-hen -Ano Sora ni Kaeru Mirai de- and follows on from the anime series that aired last season. 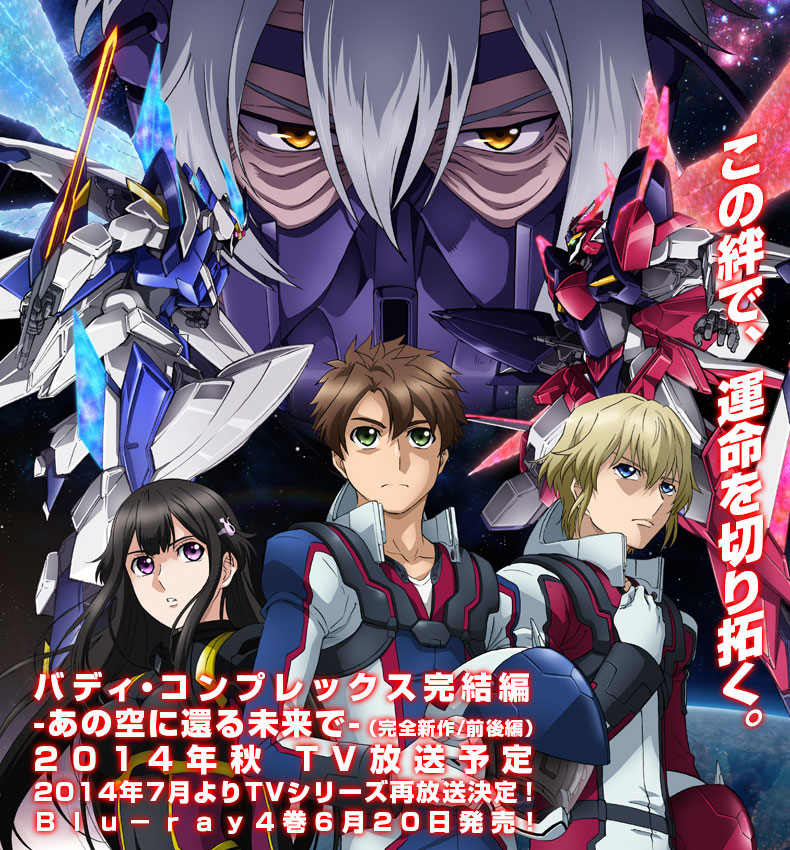 The finale will continue off straight after the ending of the TV series, where the final episode teased “to be continued”. The cast and crew will also return to reprise their roles. With the main cast being:

The returning staff include:

The website also released a video announcing the upcoming series.

Buddy Complex is an original anime series created by the collective group Hajime Yatate from animation studio Sunrise. The series officially aired in January this year, with a sneak peek last December, and ended in March for a total of 13 episodes. Two manga adaptations of the series also began in January this year, one of which is based on the anime and the other is a lead up to the mobile game Buddy Complex: Coupling of Battlefield. The mobile game released in March on IOS and Android devices.

On the first day back after summer break, high-school student Aoba is attacked by a giant robot that appears out of the sky. As he’s pursued through the city, his classmate Hina appears in a robot of her own. She rescues him, and tells him cryptically that “Dio is waiting for you”, before she disappears. This begins Aoba’s new life as the pilot of the Free Treaty Alliance against the Great Zogiria Republic.

Buddy Complex Kanketsu-hen -Ano Sora ni Kaeru Mirai de- will be a two part finale to the series that will air this October, during the Fall/Autumn 2014 anime season. Additional footage and information about the anime will release in the upcoming weeks.