A brand new anime series based on  Ryohgo Narita’s Durarara!! light novels has been announced at the recent 2014 Dengeki Game Festival, celebrating the 10th anniversary of the series. This new series will be the second anime season and will adapt the second arc of the light novel series. Accompanying this new announcement, is a promotional video launched by Aniplex.

The announcement also revealed that the production staff of the anime will be returning, though the animation studio that produced the first season, Brains Base, were not listed. Takahiro Omori will return to direct the series, but is part of studio Shuka. Noboru Takagi will return to write the scripts, Takahiro Kishida is back designing the characters, and soundtrack will be scored by Makoto Yoshimori. 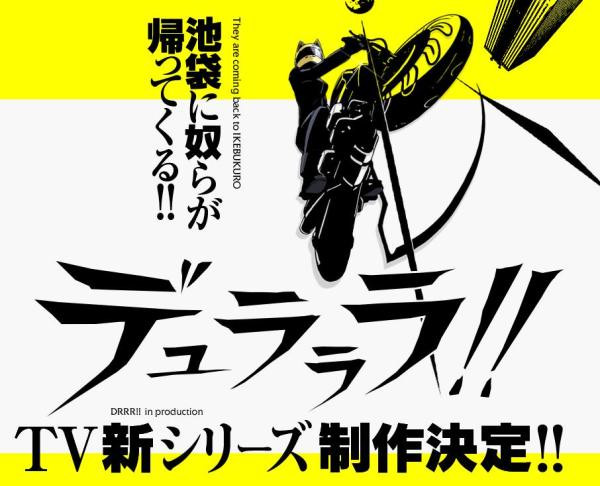 This new anime is part of the 10th anniversary celebration of the Durarara!! series created by Ryohgo Narita featuring art from Suzuhito Yasuda. The Light novel series began in 2004 published by ASCII Media Works’ Dengeki Bunko. The original light novels ended in January this year for a total of 13 volumes, but Narita has stated that he will be begin a new series of light novels titled Durarara!! SH, set two years after the original’s conclusion. The first issue will release on April 10th. The light novels received an anime adaptation in 2010 from animation studio Brains Base. In addition, two manga adaptations were also released and a few visual novels.

The new Durarara!! season will continue on from the original anime series. It hasn’t been stated to be by Brains Base, so expect more information about the studio in the near future.