The official website of the anime Free! (Free! – Iwatobi Swim Club) has revealed that a second season is on they way. The anime, produced by Kyoto Animation and Animation Do, originally aired in July last year. In addition to the new season, a new necklace inspired by the anime has been created. Season 2 of the anime is due to air this July. 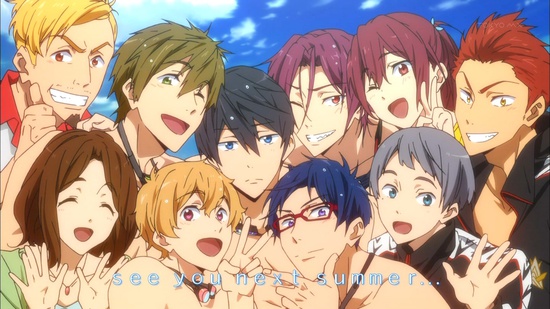 The website has also revealed the first visual for the second season. 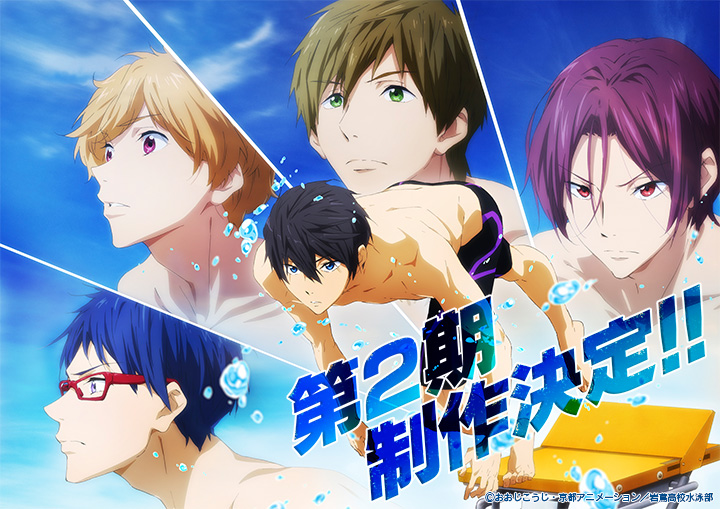 The first promotional video for Free! season 2 was released at AnimeAnime 2014.

The pendant based on the series, features a silver linked chain necklace and a tear drop shaped pendant. The pendant itself is decorated with Swarovski crystals, with 5 coloured crystals representing the main characters of the anime. The center of the pendant itself is a light blue Czech glass bead.

The pendant itself is being sold by the Japanese clothing franchise 2PM Works, in conjunction with their jewelry division Palma Gioiello.

Here are some close up images of the pendant:

In addition to the pendant, the back of the necklace has a charm. There are five charms to choose from each a different animal representing a different character from the series. They are: Dolphin (Haruka), Orca (Makoto), Shark (Rin), Penguin (Nagisa) and Butterfly (Rei).

Free! (Free! – Iwatobi Swim Club) is an anime adaptation of Kouji Ohji light novel High☆Speed!, which is illustrated by Futoshi Nishiya. The light novel received an honourable mention in the 2011 Kyoto Animation Award contest, where it was eventually published by the studio in July 2013. The anime itself aired in July, and is animated by Kyoto Animation and Animation Do – with the latter’s animation debut. There was also a radio show and two drama CD volumes released to promote the anime.

Season 2 of Free! will be airing in July this year. Additional information, images and video will be released in the leading weeks and months.

In the meantime, you can visit the anime’s official website: http://iwatobi-sc.com/