Update: Some new images have been released based on the announcement.

Publisher Fujimi Shobo have announced on the official website of the High School DxD light novel series, that a third season of the anime adaptation is currently in production. No further information about the planned new season. 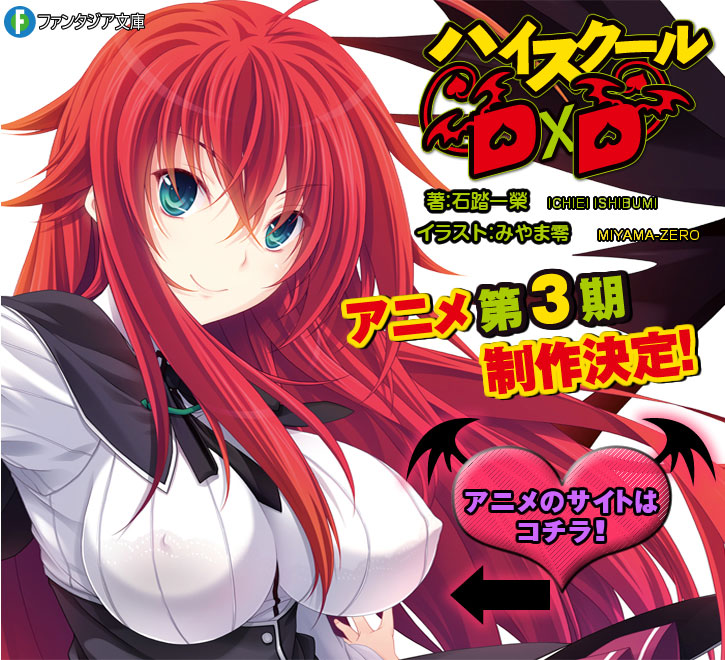 High School DxD is a light novel series written by Ichiei Ishibumi and illustrated by Miyama-Zero. The series began serialization in 2008 in Fujimi Shobo’s Dragon Magazine, before being published in their Fujimi Fantasia Bunko imprint. To date, there has been 17 compiled volumes. Three manga adaptation of the series have been published in 2010, 2012 and 2013, all of which have been written by Ishibumi. An anime adaptation was produced in 2012. It was animated by TNK (School Days) and directed by Tetsuya Yanagisawa (Sora no Otoshimono: Tokeijikake no Angeloid, Kyoshiro to Towa no Sora). Two OADs were then released, and were then followed by the second season of the anime in 2013. A Nintendo 3DS game was also released later that year.

The third season of High School DxD is in production. Information about when the series will air has not been released. The 18th volume of the light novel will release on June 20.