A wrap around jacket on the 14th volume of Akira Hiramoto’s Kangoku Gakuen (Prison School) has revealed that the series will be receiving an anime adaptation. No further information about the anime has been released since its reveal. 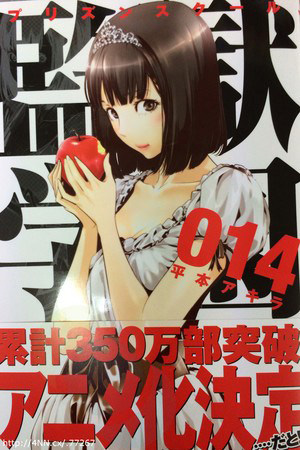 The manga itself follows 5 male students who enroll into an all girl high school hoping for the classic harem, though in reality they are subject to live as prisoners in the school. The series itself features various ecchi and nudity scenes. If you haven’t read about the manga, here are a few preview panels from the manga to give you a brief idea of what the anime adaptation could look like.

Note the images are NSFW:

Kangoku Gakuen (Prison School) is a comedy, ecchi romance manga written and illustrated by Akira Hiramoto, who has work on various other successful series including Ago Nashi Gen to Ore Monogatari and Yarisugi Companion to Atashi Monogatari. The series began in early 2011 being published in Kodansha’s Young Magazine. To date the series has a total of 15 compiled volumes, with the latest releasing on December 12th 2014, and has over 3.5 million volumes in circulation in Japan. The series has also won the Best General Manga award at the 2014 Kodansha’s 37th Annual Manga Awards last May.

Not a lot of information is currently known about the Kangoku Gakuen anime adaptation. More information about it will be revealed in the near future.