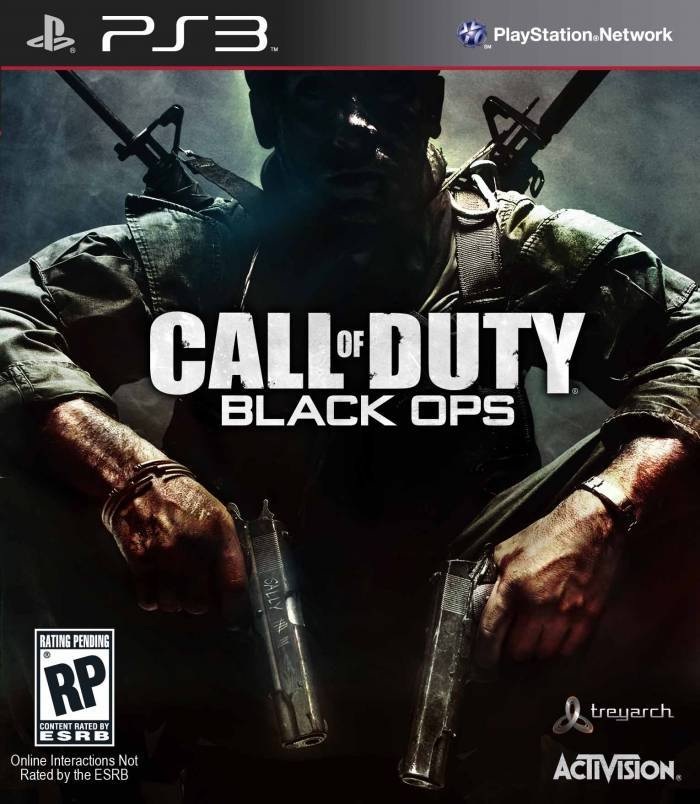 Cons
– Campaign is still quite short

Black Ops. The latest game in the Call of Duty series has finally been released and certainly it had a massive amount of hype to live up to. Generally speaking, Modern Warfare II was well received with critics and gamers and Black Ops had the goal of surpassing Modern Warfare II in terms of everything. Black Ops which is developed by Treyarch are certainly no strangers to the first person shooter genre of games and for the first time have devoted their entire development team to Black Ops only. With so much anticipation and hype to live up to Black Ops certainly lives up to it and has a massive array of brand new features that will engross and entice the player. The Call of Duty franchise is best known for their adrenaline pumping and exciting online game modes and this feature is evident in Black Ops as well.

Call of Duty: Black Ops has lots of brand new features that previous Call of Duty fans have not experienced. The single player campaign of the game follows the traditional Call of Duty formula of a very short yet ultimately sweet ride. The graphics of Black Ops have certainly improved from Treyarch’s last game, Call of Duty: World at War and the new theme of the 1960s Black Operations is a fresh and new feel to Call of Duty veterans with some favourite game modes back such as the famous Zombies. 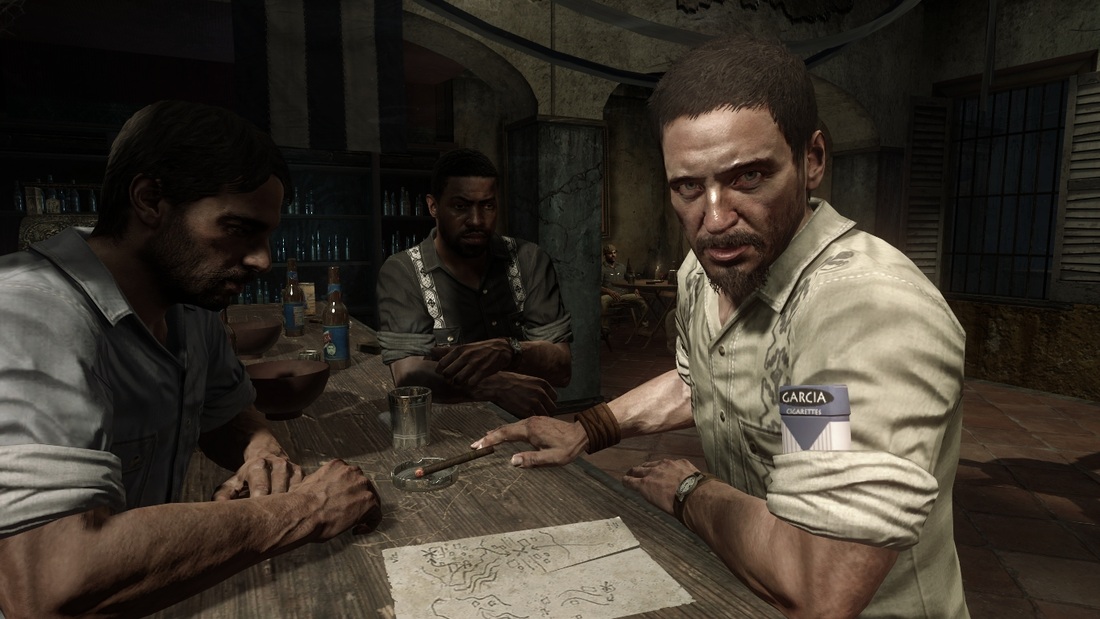 The single player campaign of Black Ops is another short one. Fans have been very eager for a solid single player experience to accompany the enticing multiplayer experience and sadly Treyarch’s single player mode is simply not long enough. There are a total of fifteen missions that are packed with non-stop action which is set around numerous locations including Hong Kong and Laos. Even though the campaign mode does not last as long as your standard first person shooter, it will certainly be remembered for its amazing recreation of Black Operations during the 1960s. A lot of the missions centre on you playing as Alex Mason who is a covert soldier that gets sent in to do “dirty” operations.

The storyline of Black Ops have proven themselves to be carefully drafted and designed. To not spoil the single player mode’s storyline, the details of what exactly happens will not be discussed here however one thing I can tell you are how fast paced and fun it is. As states before, the storyline of Black Ops will involved you in various different nations during the 1960s time period and lots of these locations have not been explored before. New settings mean new experiences and Black Ops is surely one altogether. Fighting in Laos is an unforgettable brand new experience and so is fighting the NVA and Viet Cong. Just like Call of Duty: World at War’s gimmick of pursuing a game play experience that is previously unexplored, it does again with Black Ops. The single player campaign of Black Ops is one that will be on your mind long after you finish it.

The graphical capabilities of Treyarch’s latest game have been improved from World at War. The maps both offline and online do look very nice especially levels with snow and ice. However, do not expect the graphics of Black Ops to surpass those of Modern Warfare II. It is a simple fact that Call of Duty: Black Op’s graphics are inferior to Infinity Ward’s award winning game, but I must also reinforce the point that by no means are the graphics ugly or outdated. They are just simply not as crisp and detailed as Modern Warfare II which was essentially a graphics powerhouse. 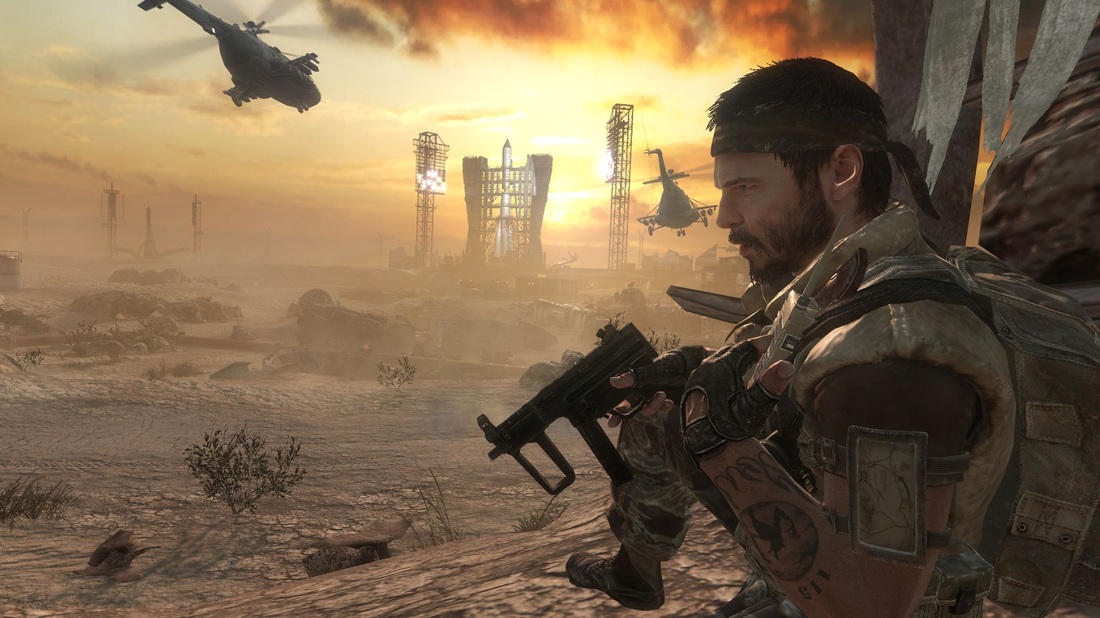 There are a very large amount of weapons in Black Ops and all of them have their own characteristics. Weaponry ranging from military grade assault rifles to explosive tipped crossbows is available to use and provide the player an endless amount of opportunities to create the perfect class. Lots of research has been studied from Treyarch as the weapons are appropriate to the time period. Weapons like the AUG, Galil, FAMAS and M60 machine gun all appear in the game and make it an awesome and epic ride that shows gamers the Call of Duty series still has a trick of two up its sleeve.

Zombies are back and they are hungrier than ever! Lots of Call of Duty fans wondered how the new Zombie mode would be balanced as newer and more sophisticated weaponry is available in the game. The answer is simple. Make Zombies deadlier and more powerful. The difficulty of the Zombies mode has been drastically up-scaled to make their famous Zombie experience even more tough and creepy. Even though the difficulty has been increased, it is still possible to survive to very high levels with a group of four experienced players.

There are now a total of three brand new massive Zombie maps. All the maps are very big and have lots of rooms waiting to be unlocked and some are familiar locations such as The Pentagon in the USA. If you have purchased the Hardened or Prestige Edition of the game, all four of the Zombie maps from World at War are back and the old and rusty guns from World War II are all replaced with the latest weaponry of the 1960s. The Zombie experience has drastically changed with the introduction of new and rapid fire weapons and this creates a whole new path for the game mode that gamers will enjoy. 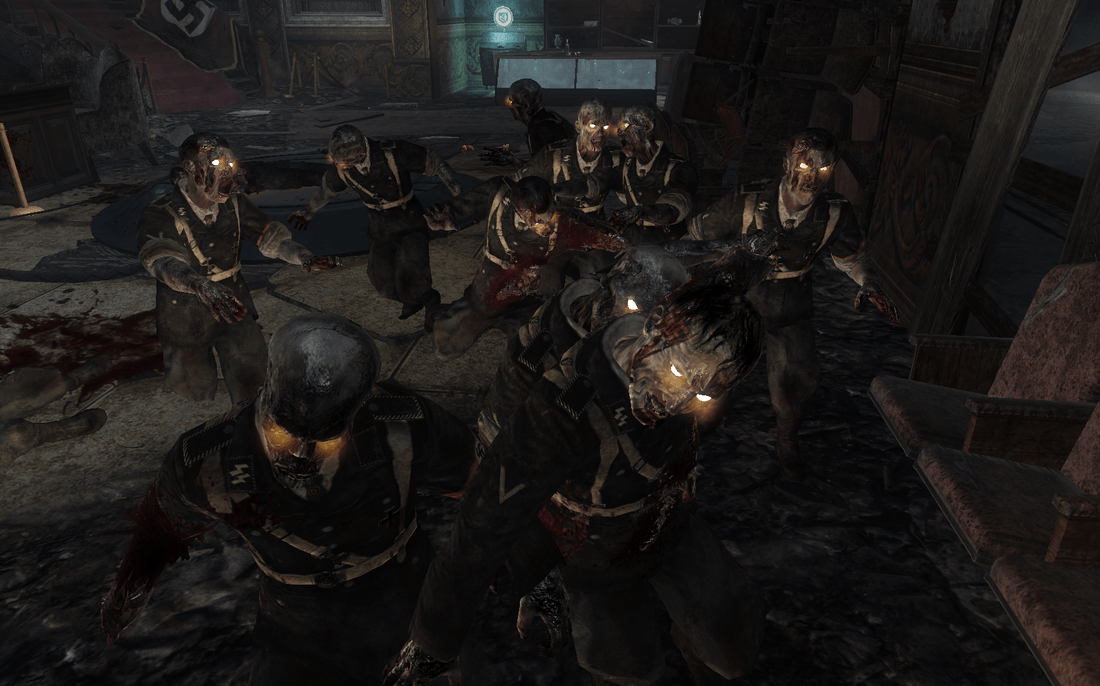 Multiplayer. Call of Duty’s most anticipated and famous point is its absolutely addictive and immersive multiplayer experience. Some veteran Call of Duty fans just purchase the game for its multiplayer component since it can provide hundreds of hours of online fun and glory for players. There are a few changes to the online component of Black Ops. Great features such as well designed maps, vast amount of weaponry, new and balanced kill streaks, high levels of customization and a wide variety of game modes make Black Ops an amazing and powerful game.

The maximum Prestige level has been increased from the traditional ten to fifteen. However the maximum level of rank obtainable has been reduced to fifty and many fans will be pleased with the decision as it means they have the chance to test thoroughly each and every weapon that is available in the game. Prestige encourages players to keep playing and ranking up and the concept of Prestige works very well and feels like it has been fluidly incorporated as a general multiplayer component.

The maps in Black Ops are generally very well designed and try to make camping and spawn camping hard for players. Most maps have lots of sharp turns and flanking routes that limit camping and have a “feel” of smoothness with them. Apart from just limiting camping, sniping is also specifically designed to be reduced. The game’s maps are generally not very suitable for sniping and are best for rapid fire weapons and occasionally shotguns. Many hardcore sniping fans may be disappointed however there are a few maps that can suit a sniping. The maps in the multiplayer section of the game are also very varied. Maps range from Vietnamese jungles to snowy satellite stations and all have a unique feel to them. Camping is not a big problem anymore and generally the maps are very well done. Bravo Treyarch! 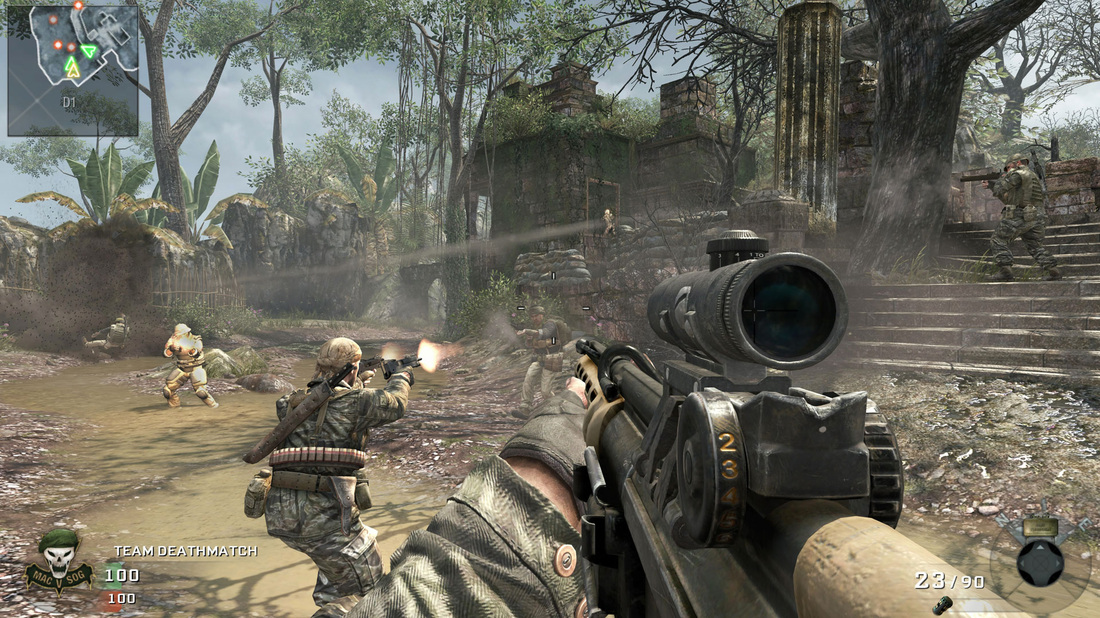 As noted before, there are lots of different weapons that are usable online and they just make the game extremely fun and enticing! The amount of weapons really does make a massive difference and all of them have their advantages and disadvantages. To accompany the already large amounts of weapons are the attachments that are available to put on your weapons. Attachments such as grenade launchers, grips, suppressors, extended magazines and scopes are all available and can make the difference between an effective and useless weapon.

Brand new kill-streaks have been implemented within the game and they all are never-before-seen. Kill-streaks ranging from the RC-XD car to a carpet bomber are available for players to unlock and earn. Some familiar kill streaks are still in the game such as a Spy Plane replacing the UAV which shows enemies on the mini-map. Kill-streaks now do not count towards other kill-streaks and this is a great way to show the difference between the genuine skilled player and the other ones who require kill-streaks to do well. The game separates the experienced and the inexperienced.

Black Ops took a risk. A risk that could make the difference between a commercial success or a failure. The extremely detailed level of customization is a great and fresh idea that Treyarch has intelligently exploited. Lots of things in the game are customizable such as your weapon camouflage, aiming reticule, scope lens, character skins and weapon attachments. Customization allows characters to develop a sense of attachment to his or her heavily customized weapon and this is just a great and new feature. 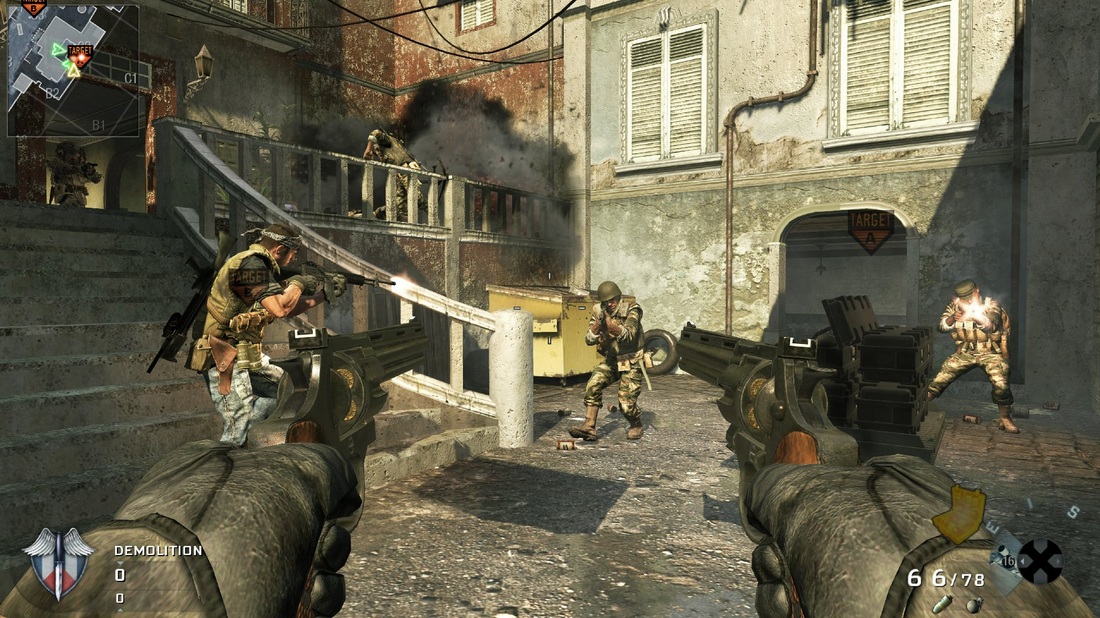 In order to buy customizable parts players must earn COD points which are now a very important and crucial component to the online part of the game. COD points can be easily gained by simply playing matches however to win large sums of COD points you can gamble it. Wager matches are designed for players to gamble their COD points in various new game modes such as “One in the Chamber”. Implementing COD points is a great new system that rewards players who perform well. COD points are used to purchase nearly every single thing in the game and encourages players to only purchase things that they need. Treyarch certainly made a smart move of implementing his brand new system into Black Ops and deserves respect.

Call of Duty: Black Ops has a very large amount of different multiplayer game modes. Just to name a few are Team Deathmatch, Free for All, Sharpshooter, Demolition, Sabotage and Domination. These are just a few of the many game modes that are heavily populated in Black Ops. All these game modes can keep even the most hardcore COD fan busy. With so many different game modes this makes sure that gamers will not become bored of the game too quickly and always keep them occupied. Lots of other shooting games only have a handful of game modes however with Black Op’s extensive multiplayer games, gamers can always play something new. 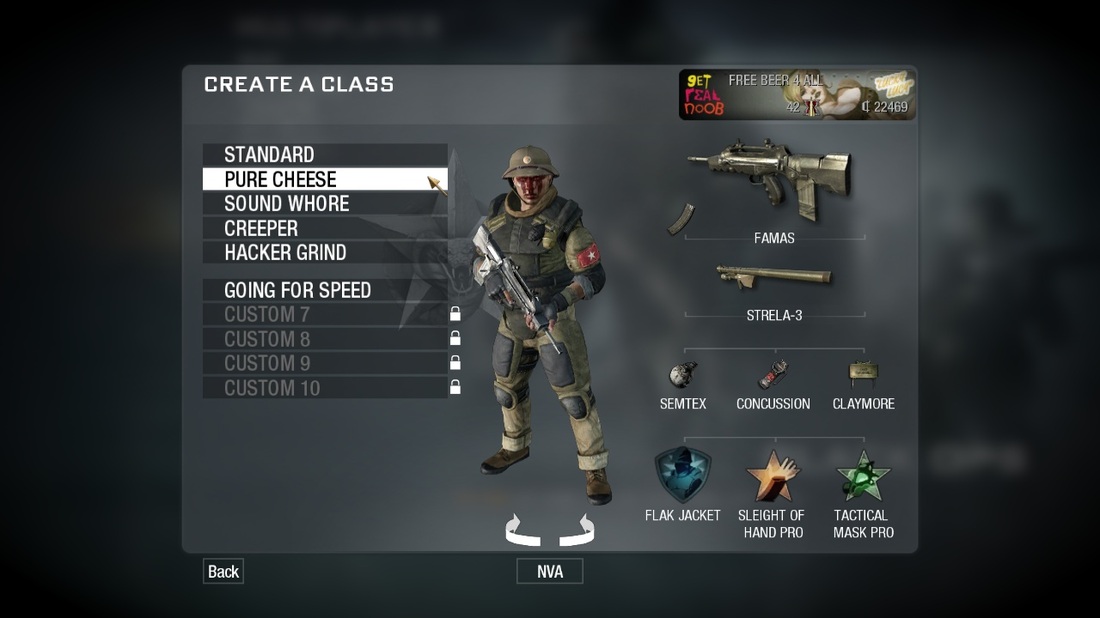 In conclusion, Call of Duty: Black Ops is an extraordinary and addictive game that can satisfy the thirst of Call of Duty fans. The single player campaign of Black Ops is very fun and feels fresh to the franchise. Short as it may be, the campaign mode does have a few powerful scripted events and is just an enthralling ride! The multiplayer portion of the game has lived up to its hype. New features are incorporated into Black Op’s multiplayer and everything slots in perfectly. To sum it up, Black Ops is an exceptional and powerful game. Well done Treyarch. Bravo!