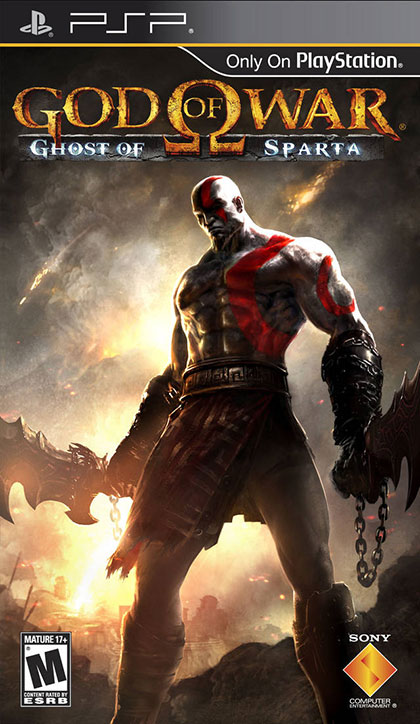 Cons
– Campaign is still short
– Easier than other God of Wars

Kratos is an angry man turned into a god after defeating Ares and just wants to exact revenge on the Gods of Olympus, killing anything in his way. Ready at Dawn gives it another go for the PSP after the successful Chains of Olympus to bring us the most epic game on the PSP. Ghost of Sparta boast beautiful visuals on the PSP with fluent combos and combat as seen in previous God of Wars, an interesting story which we still have lots to learn about the angry man yet the game doesn’t feel complete.

Ghost of Sparta is set between God of War 1 and 2 when Kratos has become the God of War after defeating Ares. Before the God of War Series an oracle foretold that the demise of Olympus would come not by the revenge of the great Titans, imprisoned after the Great War, but by a marked warrior. The Olympians Zeus and Ares believed this warrior to be Deimos, the brother of Kratos, due to his strange birthmarks. Ares interrupts the childhood training of Kratos and Deimos and kidnaps Deimos. Kratos attempts to stop Ares, but is swept aside and scarred by the Olympian. Still haunted by visions of his mortal past, Kratos decides to explore his past and travels to the Temple of Poseidon to find his mother- Callisto in which appeared to Kratos in a vision. Kratos find her and after battling a beastly transformation of her, Callisto tells Kratos that Deimos has been taken to Death’s Domain; where Deimos is alive and imprisoned and tortured by the god of death, Thanatos. 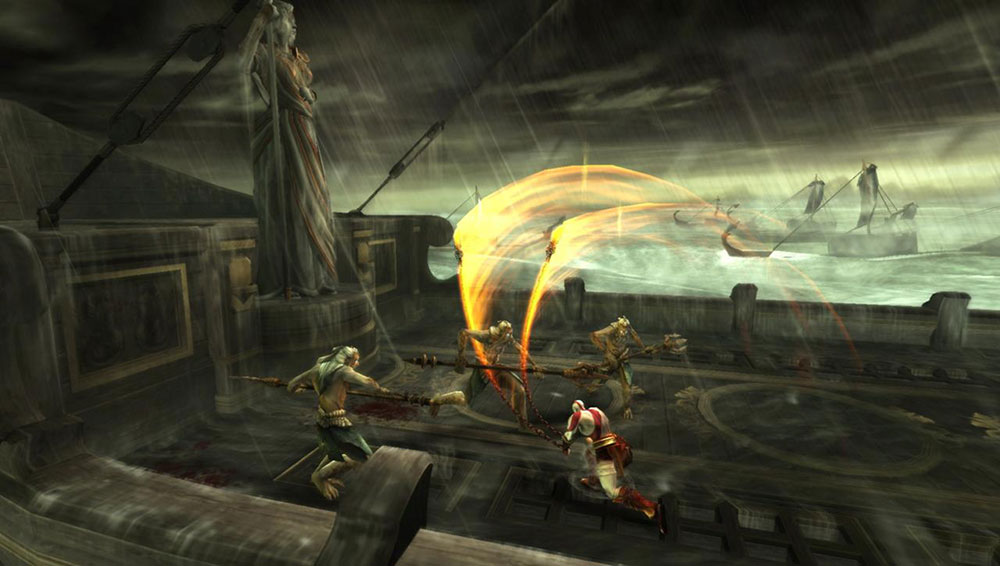 The game plays very like every other God of War game. You have the Blades of Athena and you swing them like crazy at any enemy that is unfortunate enough to cross paths with you. Sqaure is used for the typical standard attack while triangle is to launch any enemies into the air before a deadly air combo and circle is to grab enemies or start Quick Time Events. A new addition is the ability to charge and tackle foes down before a brutal head smashing or tossing it into other foes like bowling. The Quick Time events are back as usual and are still horrific and fun to initiate and watch. QTE are usually only available when the enemy is on very low health and a few button to jab, stab or slice will finish them off. But sometimes with bosses QTE occur at some points and are used to change the battle with the boss, before getting owned with another QTE.

The orbs are back in blue for magic, green for health and red for..orbs. Of course some of these orbs can be obtained from slaying your foes but the typical God of War way is to find chests and solely open them for an orby surprise. Some Chests also contains either a Gorgon Eye or a Phoenix’s feather to increase your health and magic bar respectively. A new item called Minotaur’s Horns are present and increases another bar used for ability stated below. 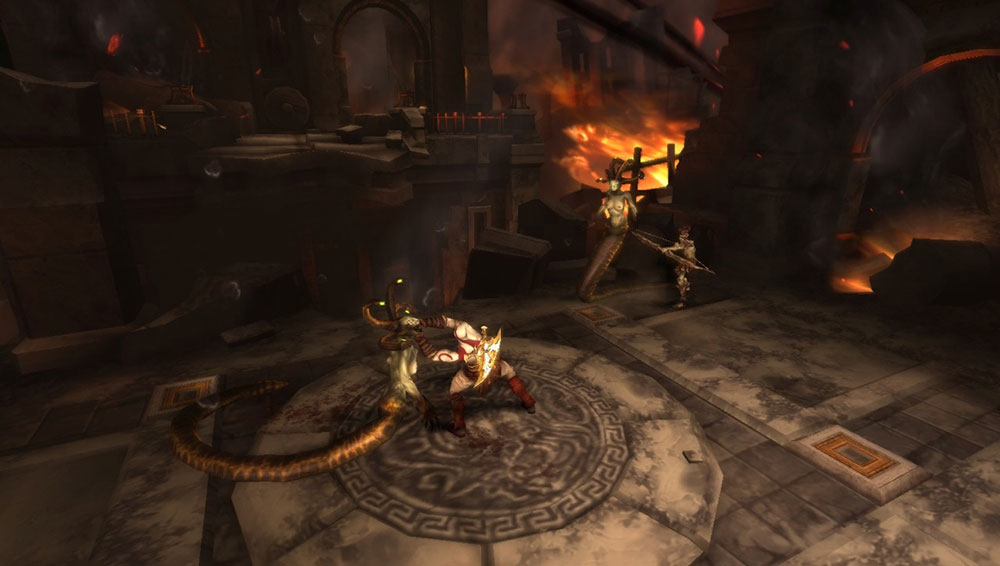 There are many new weapons and abilities that appear in Ghost of Sparta apart from the Blades of Athena. The Arms of Sparta equips Kratos with a spear and shield, which pays homage to the movie 300, Thera’s Bane which infuses fire into the Blades of Athena and allows Kratos to deal more damage to foes and break off armor of many enemies and uses the Bane meter which can be upgraded with the Minotaur’s horns. The Eye of Atlantis is the first magic item and belonged to Poseidon until Kratos snatched it, and it emits lightning like charges at an enemy. The Scourge of Erinys is an artifact that drains away enemies’ life and adds them to yours in green orbiness. And the last is the Horn of Boreas which summons the power of the North Wind God Boreas and freezes enemies nearby.

Kratos will encounter many new enemies and require more than just your blades to annihilate them. Some enemies have armor equipped and normal attacks with the blades will just bounce right off, and so using Thera’s Bane it will eventually shatter off the armor and let you bring the enemies death. New enemies such as Gorgons can turn you into stone and makes you very vulnerable because one hit from an enemy will shatter you in pieces. Bosses in Ghost of Sparta are bigger and grosser than before and require more than hack n slash to defeat them. The first boss fight with Scylla will show you how immense and epic the fights will be. Bosses do then continue to amaze me with their horrific designs and attacks.Ghost of Sparta itself is quite easy and on normal you will only die a couple times, so veterans will better turn it up to hard for a real challenge. 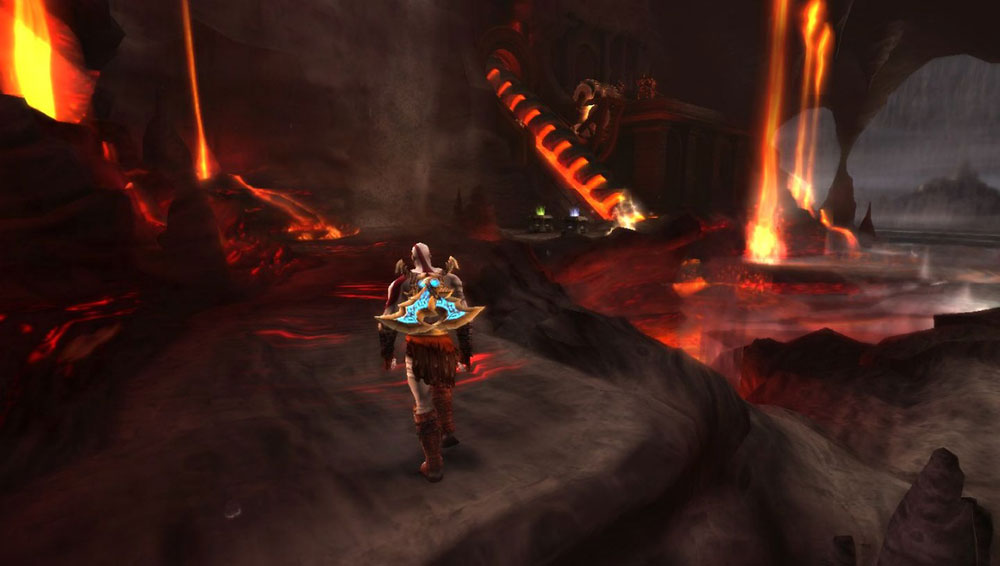 Once the game is completed you will unlock the Temple of Zeus, Challenge of the Gods and a combat arena. The Temple of Zeus is a place where you can buy special items like concept art and back story videos with red orbs. The Arena is a place where you can set up what type of enemies and how many to fight in a small circular arena. Here you can change your appearance, alter between normal of infinite health or magic and the difficulty of the enemies. This allows you to control what happens in the arena. Challenge of the Gods is where true God of War Veterans will play- there is a task which is not always easy and you have to complete it before you die. Some have effects such as draining life or only one spec of health left to test your abilities. Costumes return and can be bought from the Temple of Zeus and used for the campaign or in the arena.

The game looks stunning for the PSP, upping what was described as the best for the PSP for Chains of Olympus. The environment looks great as well as the finishes and deaths of foes. The level design is brilliant and you will never get lost and has a great way for navigating through the levels. The game loads seamlessly and everything from battles and little of the puzzles fit perfectly in the game. 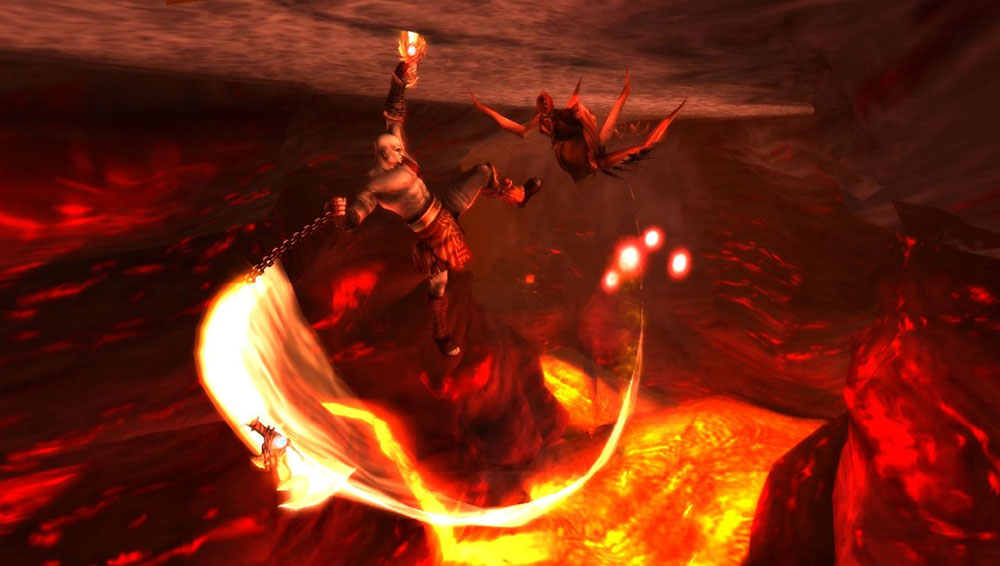 God of War: Ghost of Sparta is an improvement of the already godly Chain of Olympus. Read at Dan used the formulae of God of War III and decreased the difficulty and frequency of puzzles in favor of the satisfying combat. Ghost of Sparta has everything you’ll expect from a God of War game, although a bit too much but it is still very enjoyable with great combat with magnificent graphics and an interesting story which could be the difference from the rest of the series. The story is longer than Chains of Olympus but is still quite short and the replay value isn’t too attractive. Ghost of Sparta is what the fans will enjoy as a short but epic game that defines the God of War series. 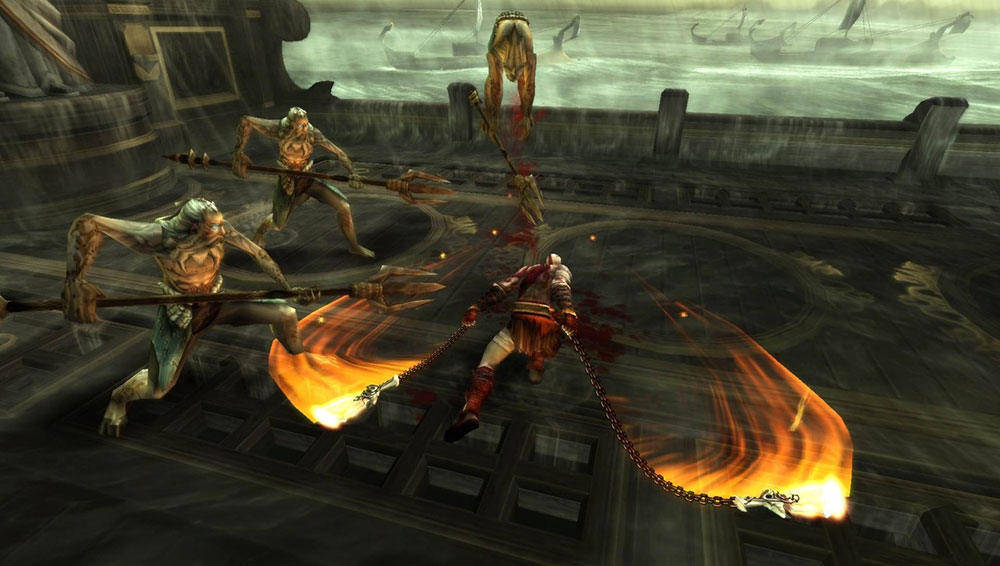 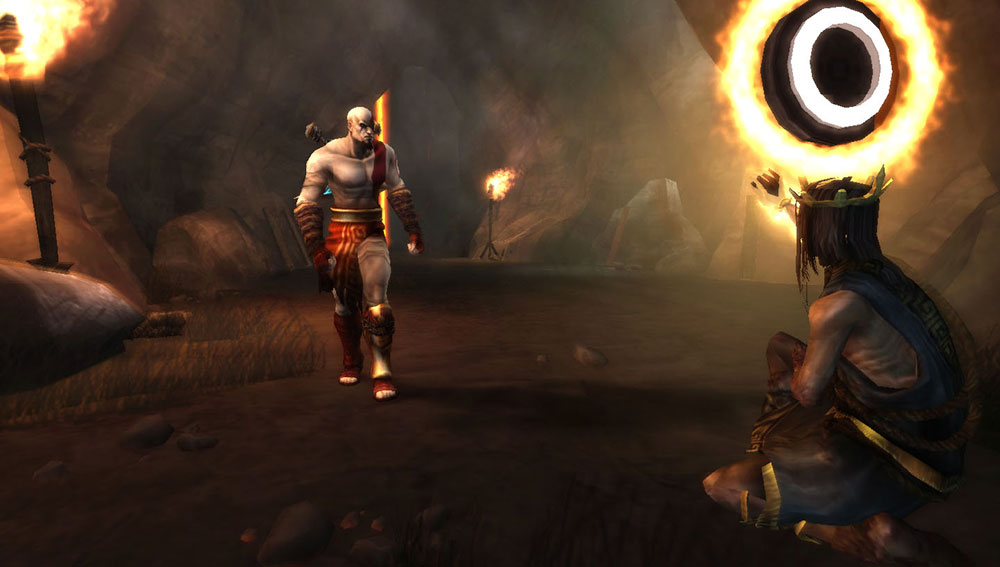 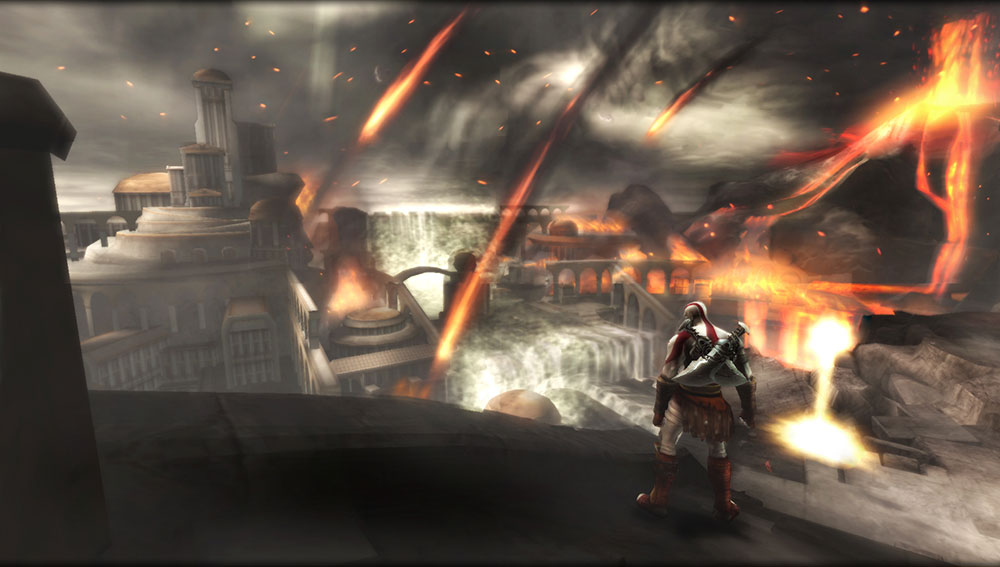 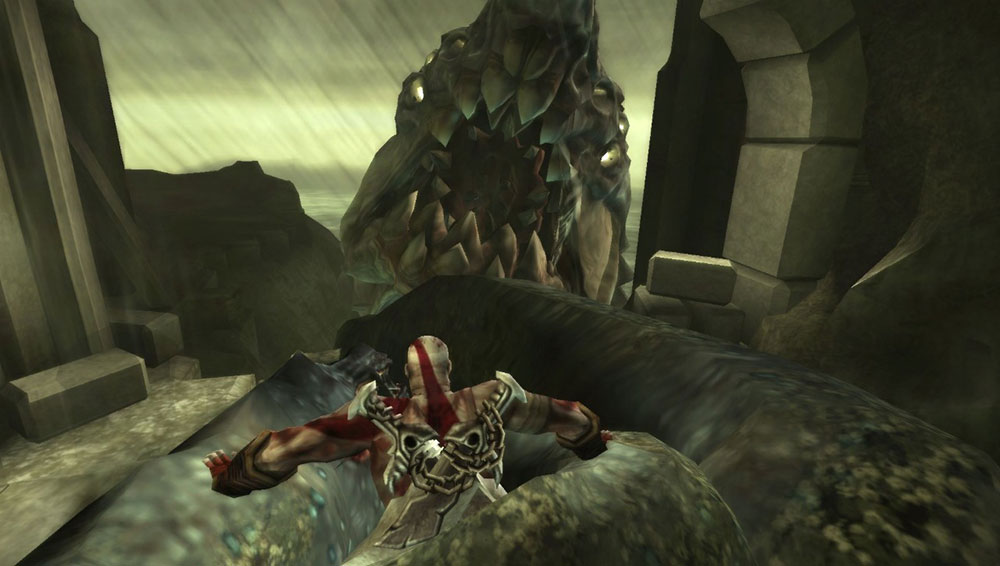 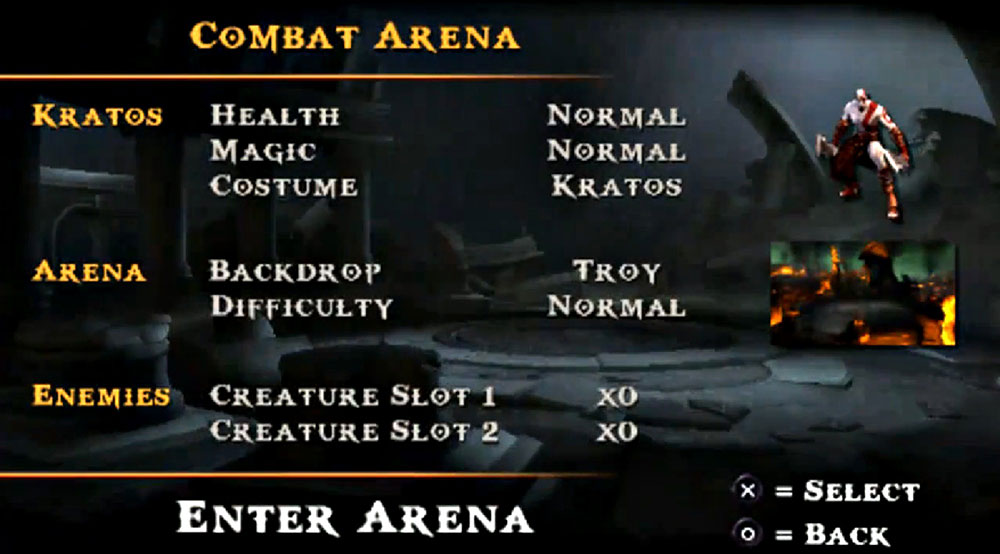 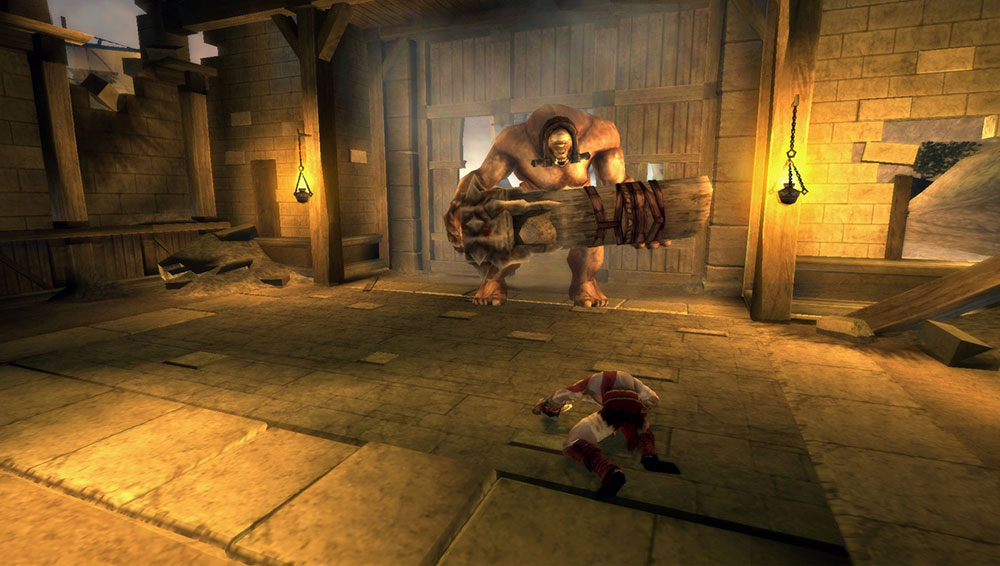