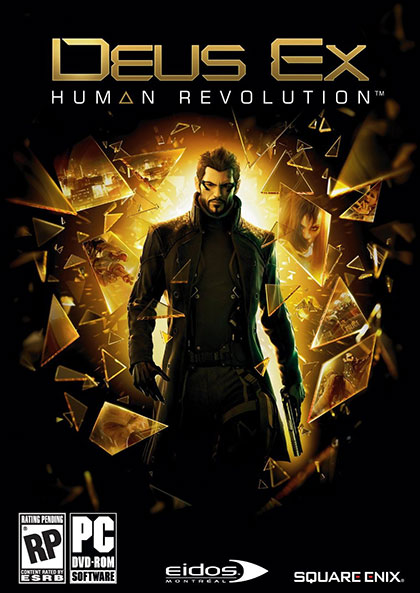 About a decade ago, the PC was on top of the gaming market. Games such as Half-life, Doom, and Unreal Tournament gave the PC gamer many top choices. But one of the best options would be Deus Ex. A decade later after an ok sequel, Eidos Montreal has worked on the next game in the series. With a large Following and anticipation- has Eidos Montreal treated the Deus Ex name righteous, or a human de-evolution?

In Human Revolution, ex-SWAT member Adam Jensen has been hired by David Sarif- owner of Augmentation giant Sarif Industries to be head of security. On the night before the speech of ground breaking augmentation research by Megan Reed, Sarif’s HQ is breeched and attacked. The attackers destroy the entire building, killing almost all the employees and crippling Adam to a pulp. Somehow still surviving the remainder of Sarif’s Employees and doctors fuse Adam with the technology he was protecting. Adam Jensen was reborn with a new life and the task to find the attackers. What Adam doesn’t know is that no one is to be trusted, and everyone lies. 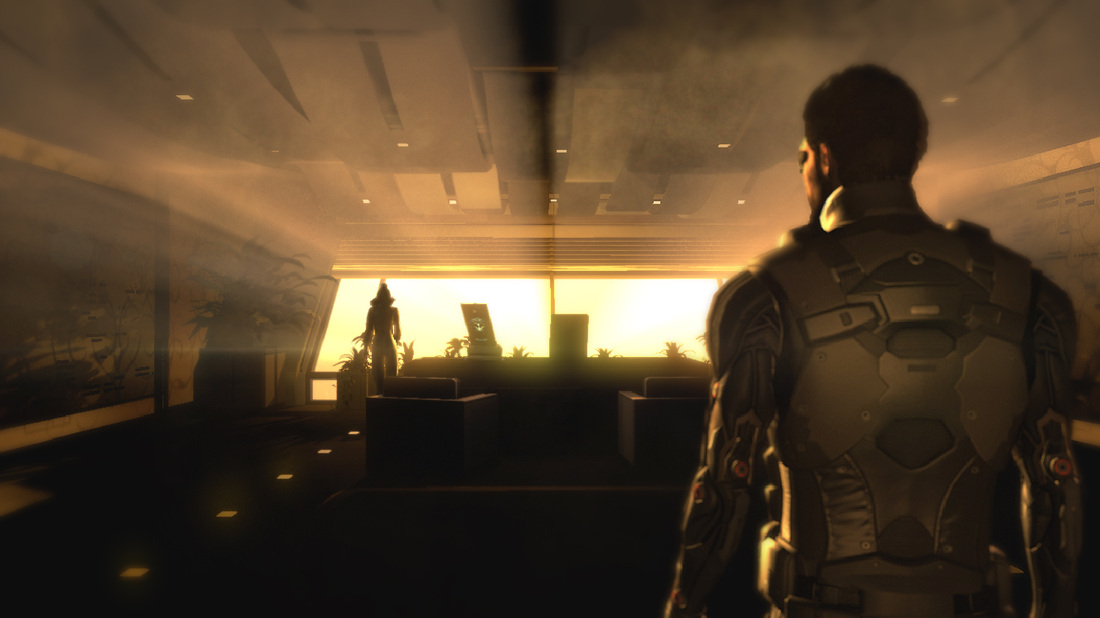 Human revolution is a gold mine of a story. The plot heavily delves into modern themes of conspiracy, the morals on enhancing human capabilities and the general breakdown of society. Like the previous Deus Ex, the plot is detailed, deep and very complex. Many of the outcomes and backstory don’t get explained outright, rather a slow burning process that gifts you chunk by chunk.

The plot does benefit from the slow plot, it’s an RPG, they take time to invest in and the more time invested- the bigger the reward. The game is fuelled by little backstory snippets found throughout the world. In forms of eBooks, emails or the daily newspaper, the world and plot is deep and entertaining enough to keep worms sucked into the game.

Human Revolution plays a lot like its predecessors, big open missions with tonnes of different pathways to get to your main objective, with many side objectives to test your skills. Missions in HR are set up to let anyone with any play style to pass through the game multiple times, differing tactics each time. One example of this freedom of choice- You need to reach the bottom floor of the establishment and there are many guards around- you spend all your time in hacking and none in combat? Hack the doors and go in through there, like to explore? Look around and you might find a vent that leads you to a lower floor, or if you like straight up action, go around the place and take down everyone in your way.

The RPG is a big factor in Deus Ex; you are an augmented person and have various skills and advantages over other soldiers. You rack up EXP for many various reasons and when enough, you gain a praxis point to unlock a new skill or move that was previously inactivated to let Adam recover. The system gives you many optional Augmentations to select and level up depending on how you approach different situations. The game rewards every player that has a clear tactical approach to the game in mind. Those who are on the fence usually get stuck there. 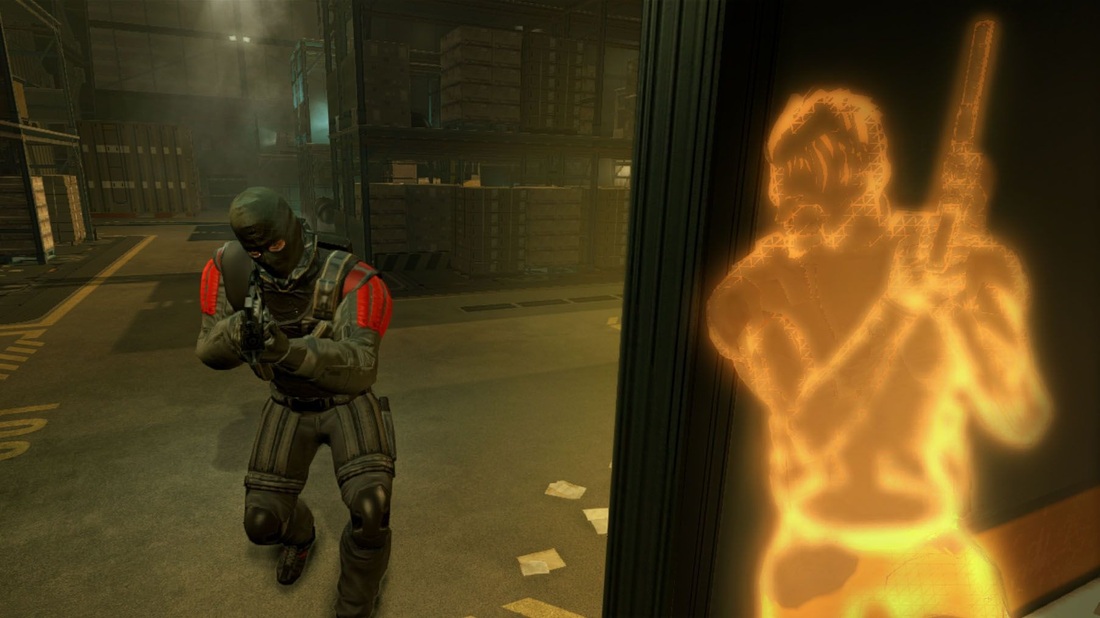 Some of the augmentations include more strength to lift and throw heavier items, a cloaking system for a few seconds and explosive projectiles that launch from Adam in a radius around him. Many of the active skills such as the explosive projectiles (Typhon) require you to use a battery cell. You have a limited battery cell and only the first cell regenerates over time. There are augmentations to increase the maximum capacity of cells or to improve the regeneration rate.

Gaining Experience points is like how you approach the mission, getting rewarded for what you do best. You can take down hoards of enemies and gain EXP from that, taking precise headshots, stunning or tranquilising guards, exploring new locations, hacking various electronics or just completing objectives the right way will earn you good amounts of EXP if you stay with that approach.

But overall exploration rewards every player because in the city hub (free roaming area) sidequests are scattered all over the place and you need to explore and talk to the right people to initiate the quests. All the quests are very varied and don’t involve killing X amount of people or collecting X items, but really long thought out quest with real consequences to the world and main plot line. The game challenges choices a lot, and you get to live with the choices you made regardless of how small it is.

Dead bodies and weapons lay on the ground just as you left them, so don’t be surprised if you see the street filled of bodies because of you. Like most of the Bioware games, Dialogue is rather important and can make or break your progress. Saying the wrong things to the right people may cause you to take a different approach, or into a fight with them when you know you’re not supposed to- be careful of all your actions, physical or verbal- it has heavy weight. 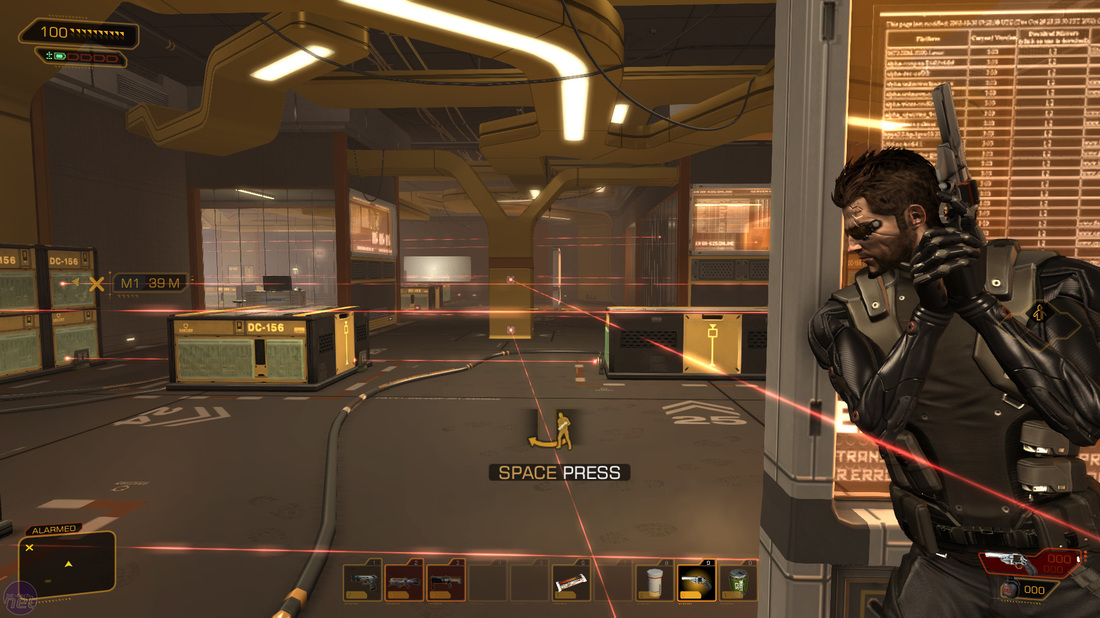 The FPS part of the game is quite unique and different from most modern dumbed downed experiences. Your inventory has a capacity which means you can only carry whatever space you have. The inventory is all separated into many blocks. Different weapons take up several blocks such as hand guns taking up 4 or massive rocket launchers that hold up 10 blocks of your inventory. Ammo itself takes up space so you better stock up on what you need, which may be a problem since ammo is a big concern in a game like this. You can upgrade all your weapons with upgrade kits, which may increase the ammo capacity or give it some armour piecing rounds. This takes some priority as weapons you use more need better upgrades to give you that edge.

Enemies are usually very lethal, if they spot you the alarm goes off and many of them chase after you unless you take’em all out, or disappear. When the guards have been alerted, it only takes a small amount of lead before you drop dead. Well, that is only the case if you pick a stealthier style but enemies can became a bit of a task to take care off, when they’re in numbers. Enemies are of the 3 usual types- light, medium and heavy. Headshots are usually a 1-shot kill but heavies and helmet goers require the extra bullet to knock them out.

The enemy AI is relatively basic, and have a small cone of vision. This doesn’t mean they aren’t oblivious to what you do. Like in other stealthy games such as Metal Gear Solid or Splinter Cell, enemies can hear your footsteps and may follow them to the most recent location, where you can also launch a trap. Sometimes not taking out the guards may be rewarding, you can listen in onto their conversation and reveal some nice juicy information. On the other hand you could kill them for pocket secretaries which are like post-it notes with information on account logins and passwords .You won’t be only dealing with guards as security cameras, turrets and robots do scan around corridors and rooms. As with the entire game you can deal with these at your own pleasure- blown them up with explosives, EMPs or bullets, sneak pass them or hack into them. 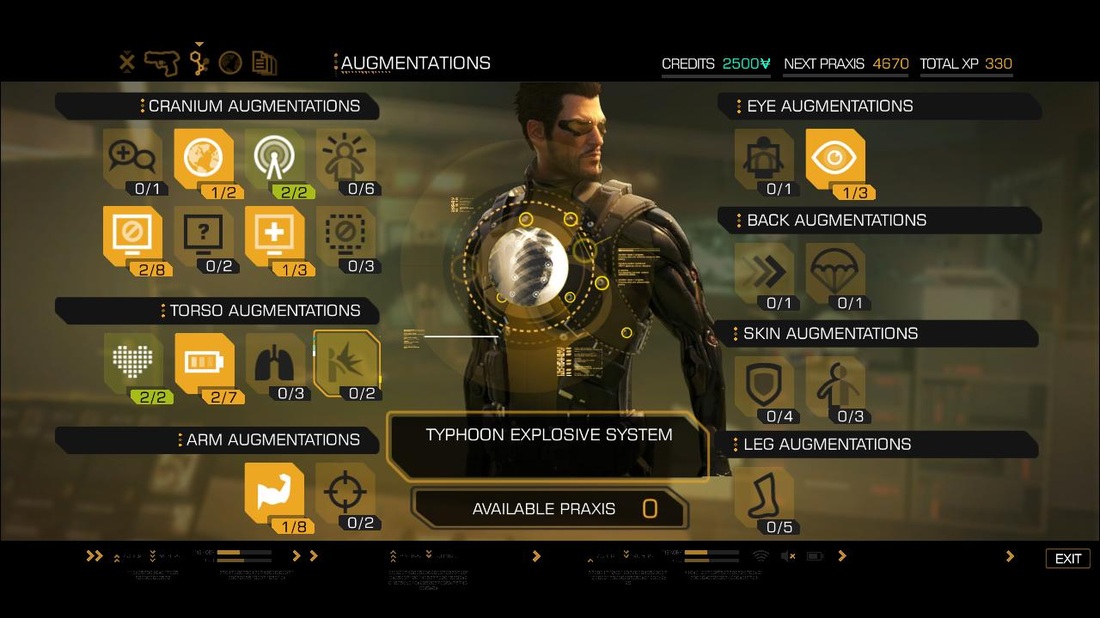 The only thing you can’t make a choice of, is boss fights. In the original boss fights can be avoided and they are quite fun at times, but here they are mandatory to everyone. In the original you could finish the game without killing anyone- here you have a few to kill and they are tedious and uninspired. The bosses have stupidly immense amounts of health, cheap abilities and you are stuck with them in a small horrible room, not good for ninjas like me. There are only a few boss fights in the game, but they hinder the entire experience.

Throughout Human Revolution you’ll be visiting many exotic locations in the world such as Hengsha Island, Montreal and Detroit… Environments look quite good with a busy and active society. With many flying objects above head and the many citizens populating in city hubs- it feels good to be part of the future lifestyle. You can talk to everyone and they talk to you, with some repetitive dialogue but in some cases there is a rare case of people talking about related context. One bizarre thing about Deus Ex is that everything is in a tint of yellow. The atmosphere, lights, the HUD and most other things are yellow. I don’t know why it is there, but I don’t want a yellow life, I like other colours too.

The character models look quite dated and sometimes awkward when you speak to them. Maybe it’s because Adam Jensen looks better than everyone, even his slick shades probably have more polygons than most of the characters. The voices themselves for characters are done very nicely, I like the batmanish voice for Adam- gives him the real edge and cool factor. All the random encountered characters are all voice acted and sound quite good and natural, especially in Hengsha where they speak the local language. The game has a good soundtrack sporting a sort of blade runner style, with an electric style. The soundtrack is very prominent in the game and is also a notifier of the alertness of the guards. The music gives the extra nod that you are in fact in a futuristic setting. 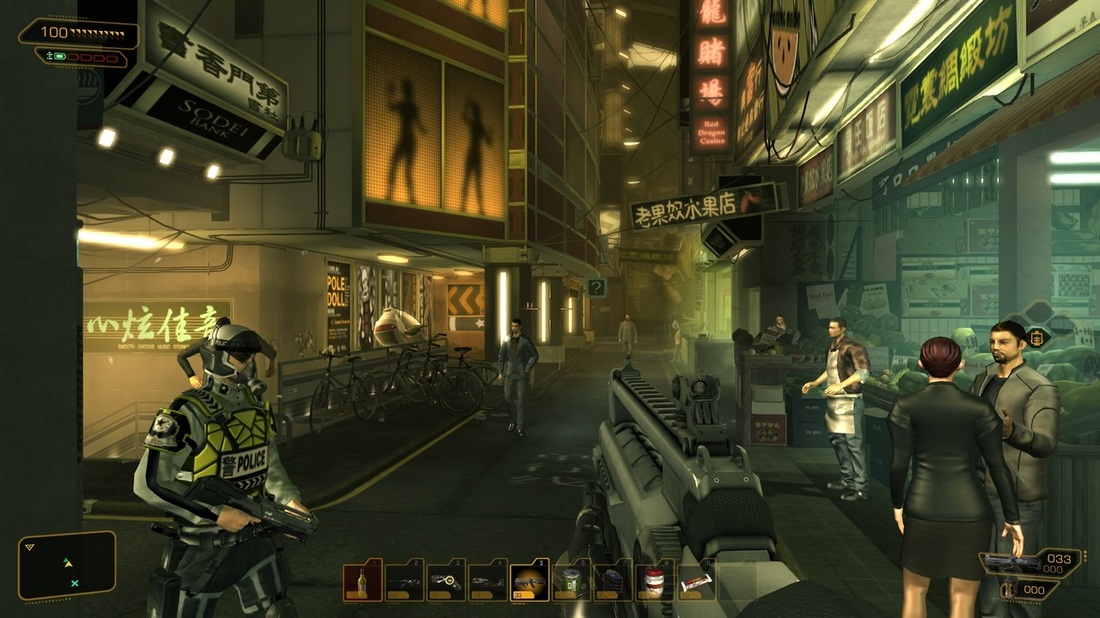 Deus Ex Human Revolution fits perfectly in the series in terms of gameplay, plot and sound. It invokes choices made by you and enforcing the decisions you made to reach your goal. The game rewards you for doing things your way and the rewards are very promising. If you’re a Deus Ex fan, why haven’t you picked this one up? If your new to the series you won’t regret every minute of it (aside from the bosses) and if your new to gaming or the genre- take a little step back, this game is for hardcore gamers and the rewards are mountainous if played just right. 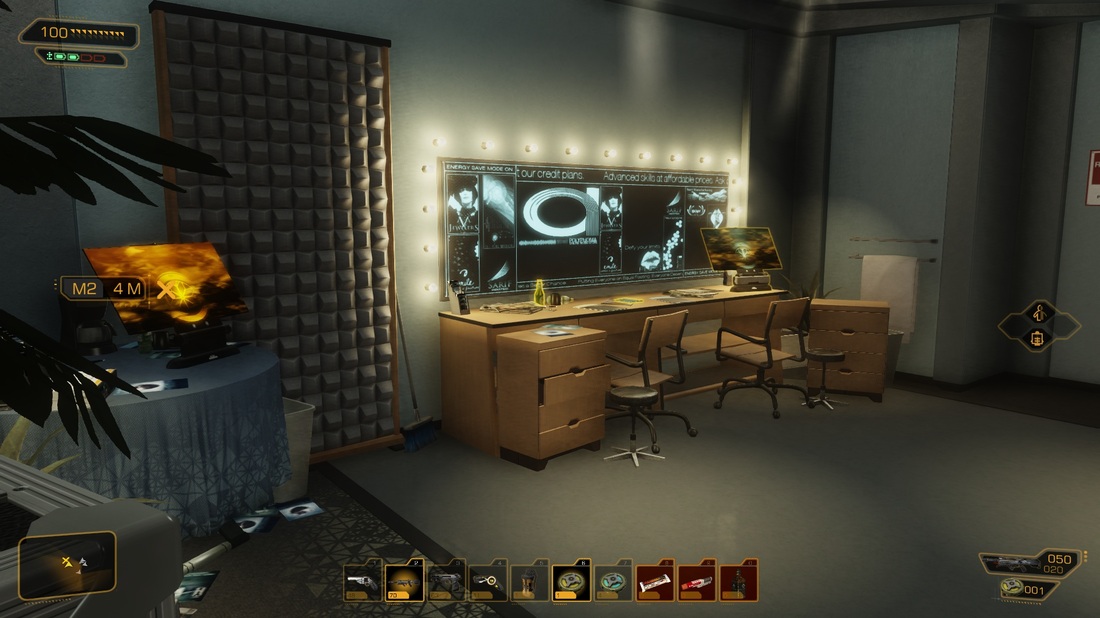 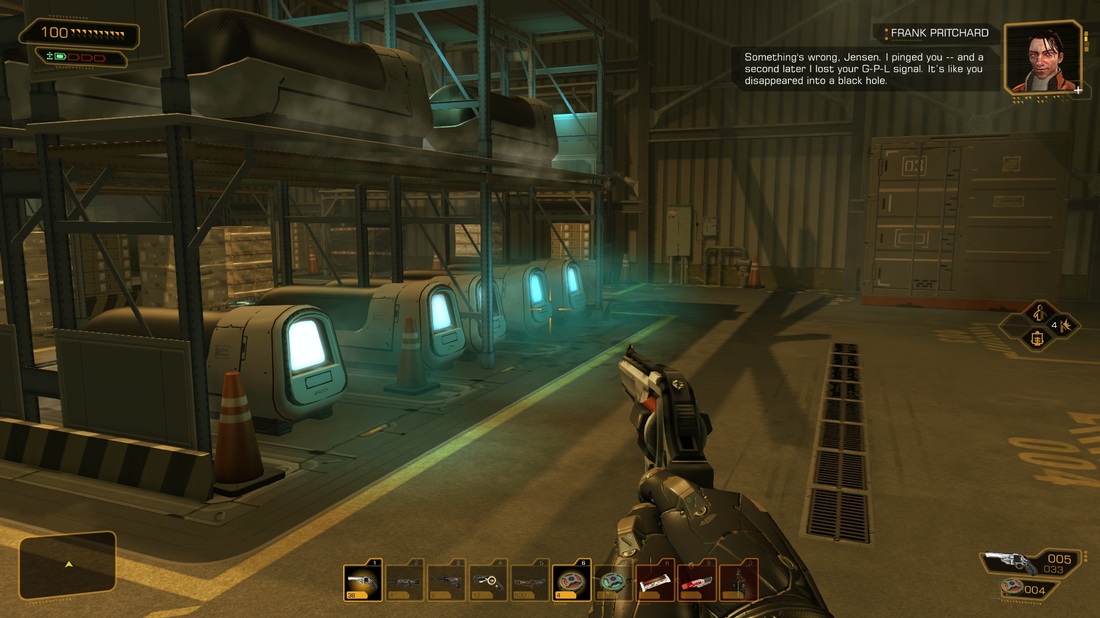