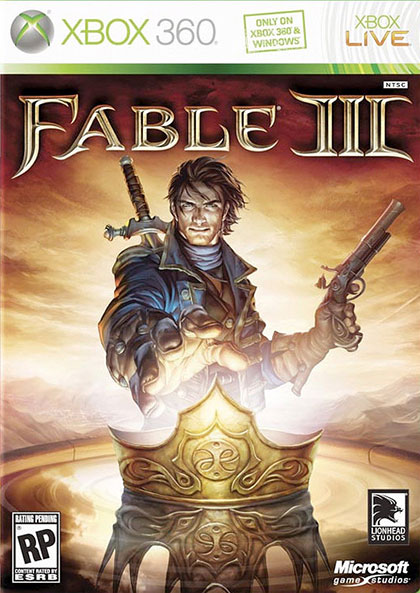 Peter Molyneux and Lionhead Studios are very famous for the overhyping for most of their games, Fable to be precise. Since the first two were great success how would they make the third even better? By adding the ability to rule as king or queen of Albion. But it isn’t all crowns and jewels; Fable III isn’t what anyone has expected from the ‘hype’ Peter has given it again. Fable does have its charm with a unique artistic design for the industrial era, a light-hearted and humorous dialogue and the part not being a king, is quite fun. Then again the game is plague with lots of visual bugs, has a dumbed down world where consequences are minimal, a shallow yet somewhat confusing combat but the bottom line is- it’s too simple and easy of a game.

Albion has reached the industrial age; you are the Prince or Princess, son or daughter of the previous Hero from Fable II. Your brother Logan is the current king and he is a tyrant and needs to be removed for Albion’s benefit, and only you can be that part. You and your military consultant Walter leave the castle to find some forces that will help you into over throwing the throne and claim it as your own. Split into two, most of the game is the revolution- fighting monsters to gain more comrades; while the latter half is you being in the throne and as king/queen you need to decide what is good for Albion or for yourself. 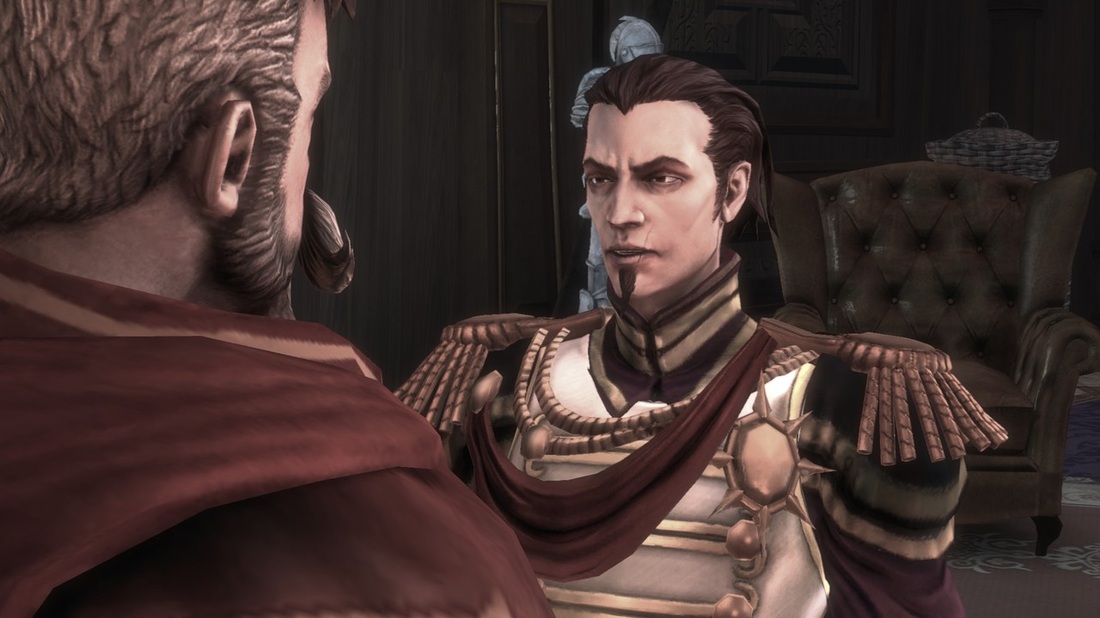 The revolution half is the best about Fable III. It sticks to the good, rowdy, fun gameplay and mechanics of Fable II. The combat still consist of the melee weapon, range weapon and magic. The combat system has been simplified especially the melee; weak and strong attacks and block are all mapped to the same button- X. Tapping X will give you a weak attack, holding X will make you block and holding X whilst pushing the left analog stick in any direction will charge for a strong attack. This seems rather confusing when you’re only trying to block when you accidently charge up for an attack and be exposed to enemies’ attacks.

Magic gets a very healthy buff in Fable III. Since you Magic is almost gone you require some help from magic gauntlets that do it for you. It isn’t new news but the new thing is dual magic. In one hand a hot fireball and in the other a zappy shock spell, use both and you get some fireworks. Magic is much better than in Fable II though there isn’t as much spells it is the best of the three combat types in this game. The gun is the typical shoot’em up and charging makes a more powerful attack. Using your gun while stabbing hollowmen isn’t as intuitive as before and a annoying time penalty occurs, fire is usually the answer to everything.

Since everything has been dumbed down, the weapons have been as well; only two types of guns- pistol and rifle- and melee weapons-hammer and sword. What happened to the vast array of weapons from Fable II? Where is my katana? All gone to better suit the ‘Action’ of Action RPG. Quests have also lost their RPG touch as they are all too simple, and very repetitive. Though completing these quest increase your XP or guild seals and you will be able to partake in ‘The road to Rule’. It is just basically a ‘simple’ way of levelling up. There are gates, before and after each one are chest and in each of these chest are either something that should’ve been unlocked at the beginning of the game or some fancy power up for your combat. Things you should’ve unlocked? Well this means that everything that was remotely connected to socialising or real-estating in Fable II has to be unlocked in the road to rule. Yep, buying houses to rent out, buying business to get discounts and even being friendly to others require some sort of guild seals to activate. 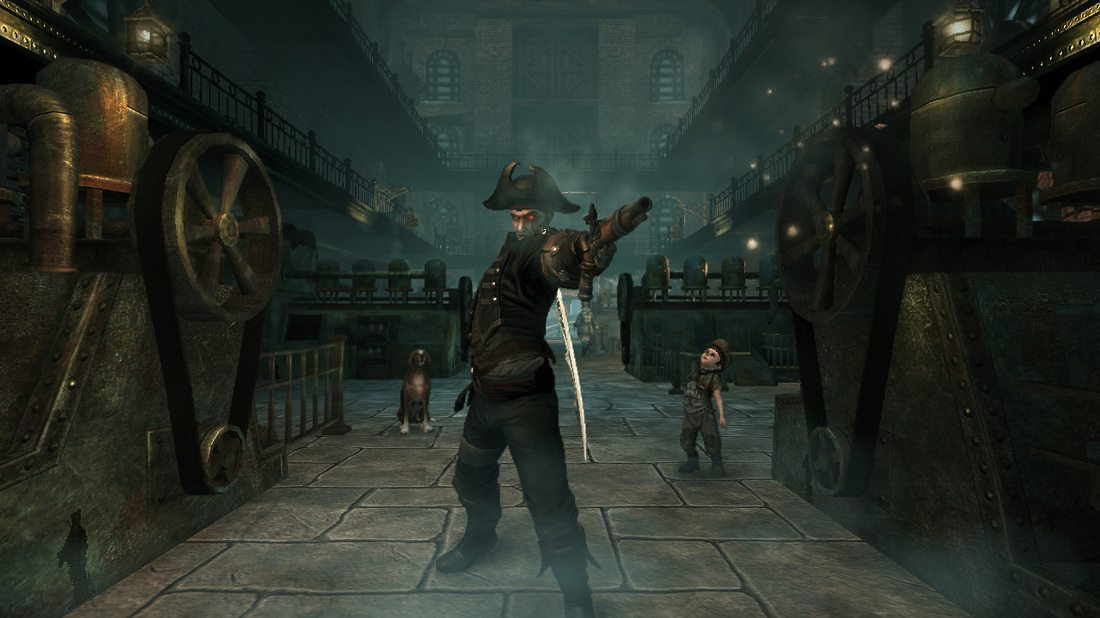 Not that it matters since all interactions with villages have been simplified again. Instead of having a massive wheel for interactions, you only get three- one good, one evil and one foolish. You don’t even get to choose which face to use anymore! All of Albion has been simplified too much, the dog even has problems navigating and locating treasure. One other major feature is being able to hold another’s hand. This is used to drag criminals into jails or to bring that lovely someone home for some coffee. Whilst leading someone they too can get stuck in the environments and it gets frustrating quick. Other bugs plague the game occasionally, textures popping in and out or even buildings not rendering at all. Audio gets distorted or none at all and the golden trail becomes stupid at many times, either not appearing or just going around in circles.

It is quite a shame since the world and decors are quite uniquely designed to fit the Industrial era. Albion itself is breathing, living and growing and it does make you feel like a part of it. The character models of poor workers, stingy high class people and the common street ‘pleaser’ all look different and distinct from one another and easy to tell. This unique art style brings out all of Albion and enlightens all the special villages and towns to visit. Bowerstone itself is vastly different since Fable II, buildings are more modern, dirtier and more buildings change the look and shape the time gap since Fable II.

Bowerstone isn’t the only place in Fable III; in fact this has been expanded on for once with the Hero even travelling overseas to visit Aurora, a desert place similar to Aladdin. These villages and towns have their unique flair and society and travelling between them all is good fun. From the groovy land lovers of mourningwood to the guards and servants of Bowerstone Castle, each place is unique and welcome. And the voices of each of these uniqueness are quite humours and light-hearted. Characters will be joking around with you, cracking jokes or accepting your jokes as all part of the fun. Fable III now uses a central hub called the Sanctuary at the push of start. Replacing the many menus, the Sanctuary focuses everything here. You can change your clothes, equip different weapons mid-fight, go to the dreadful road to rule or have a chat with friends on Live. Fast travel returns and is a big feature- since Albion is now bigger than ever. In the central Hub there is a map of Albion and all the places to village. From there you can choose which quest to take, where to travel and even your real-estate skills. After acquiring the ability to buy houses, you can rent houses and set the rent as with Fable II. Fable III expands on that by adding house conditions. Houses tend to lose their charm and when they reach 0%, the tenants refuse to pay the rent. You can be evil and take care of them or be repairing the building with your cash. This micromanagement takes a lot of time and it’s helped with the map in the Sanctuary. The map lets you do everything you would do in person at that house- repair and set rents of that house, and since the map is done in real-time, you don’t have much time.

While the first ‘revolution’ half of the game is fun the second half of the game is blatantly boring, quick and a real downer. Once you are crowned king, you are immediately faced with a impending doom a year later. Your choice is to stay true to your good intentions and loose all the money from the treasury and let all of Albion die, or become worst than Logan to save everyone. This is rather stupid since after being good throughout to entire game, you will be the king of no one. Shops won’t open, villages lie dead on the floor- it is quite a horrible side effect. The days of being a king before doom is very short as well. You get a daily roster for your daily king life. That only last for a few daily times as between each roster can be a massive day gap from 300 days before doom to 230 days.

The single player campaign of Fable III is quite a mixed bag. The first half of the game is deemed fun but having severe drawbacks in the lack of RPG elements, and the second half feels like a quarter. The game overall is too simple and short but has a small enjoyable ride. 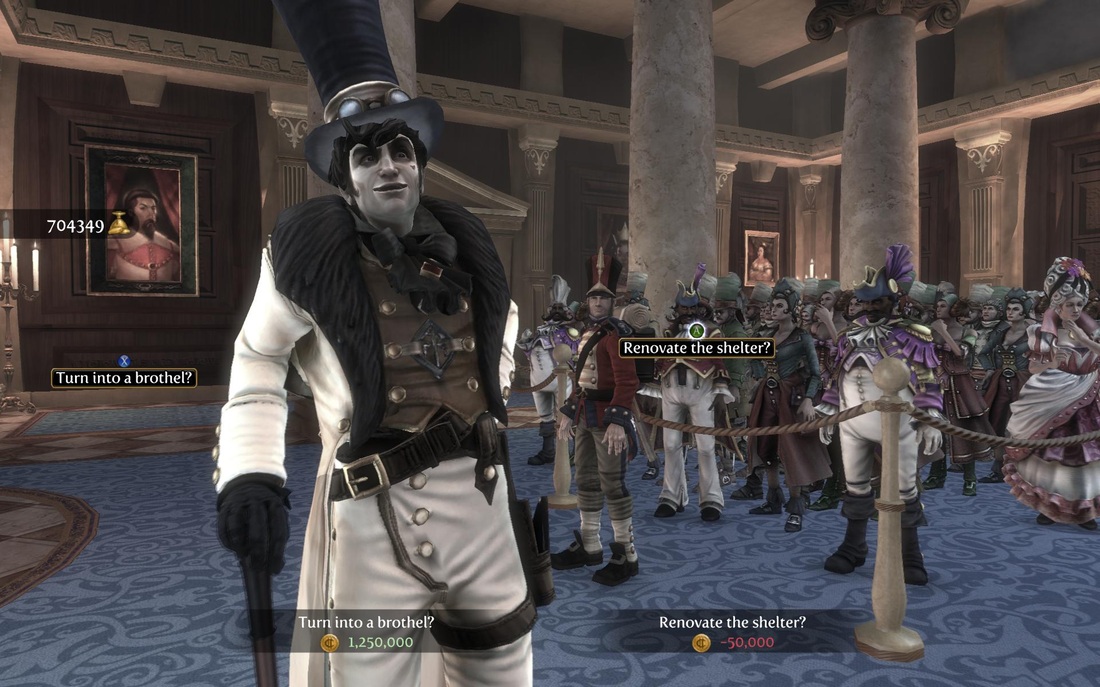 Co-op was a new feature introduced in Fable II and while it was a quick refresh, it had problems. Now Lionhead has polished the Co-op and it’s as fun as ever. Pairing with a mate online or split-screen you can venture into your world with a friend either causing mayhem together or mischief. Quests are only activated and completed by the host and the host can decide what the joining player can take home. Split-screen had a terrible camera angle and it is fixed up here. Bugs and problems of the campaign are found here but it doesn’t bother anyone much.

The Sanctuary itself is quite online friendly with a Live room. Here you can see all your friends, the worlds that are available online and such. You can send gifts to each other, help in quest, chat and other socialising things possible. There are drop-in/drop-out sessions which are quick and easy and connection problems are inexistence. The Co-op in Fable III has been redefined and is well polished. Kicking chickens and farting in people’s faces with a friend never gets old. 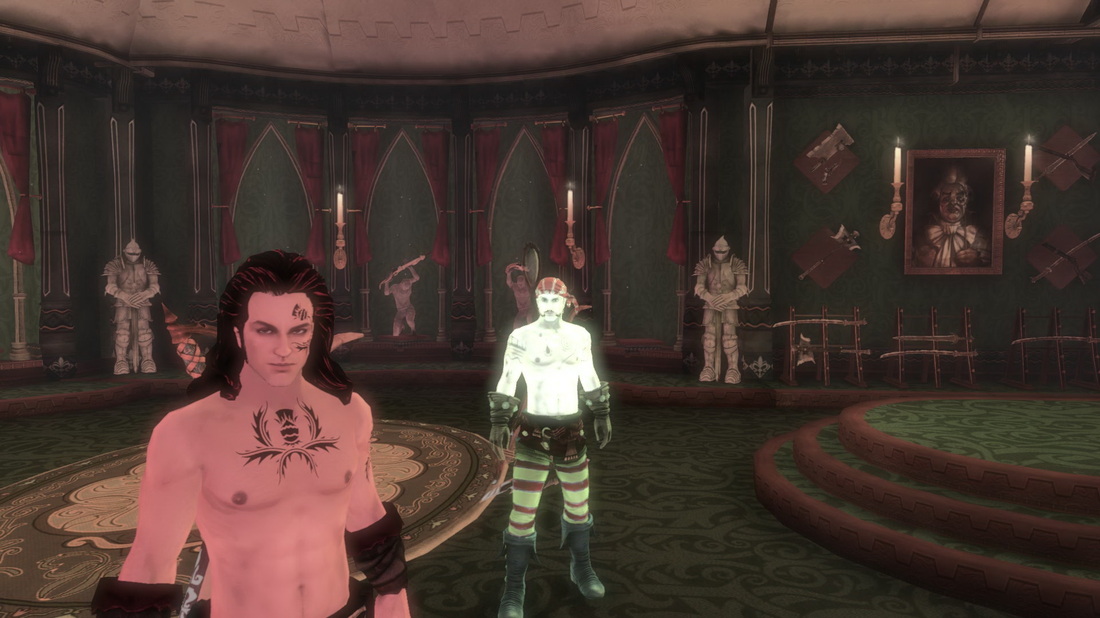 Hyped and overhyped that is the typical Fable and Peter Molyneux fashion and it’s no different here. Fable III is basically Fable II revisited and dumbed down. Having numerous problems offline but a fun online creates something rather weird. Fable fans may be disappointed with this product, as the Action RPG is now Action with a few RPG elements in Fable III. Despite many problems Fable III is a solid game with some enjoyable bits and replayability. 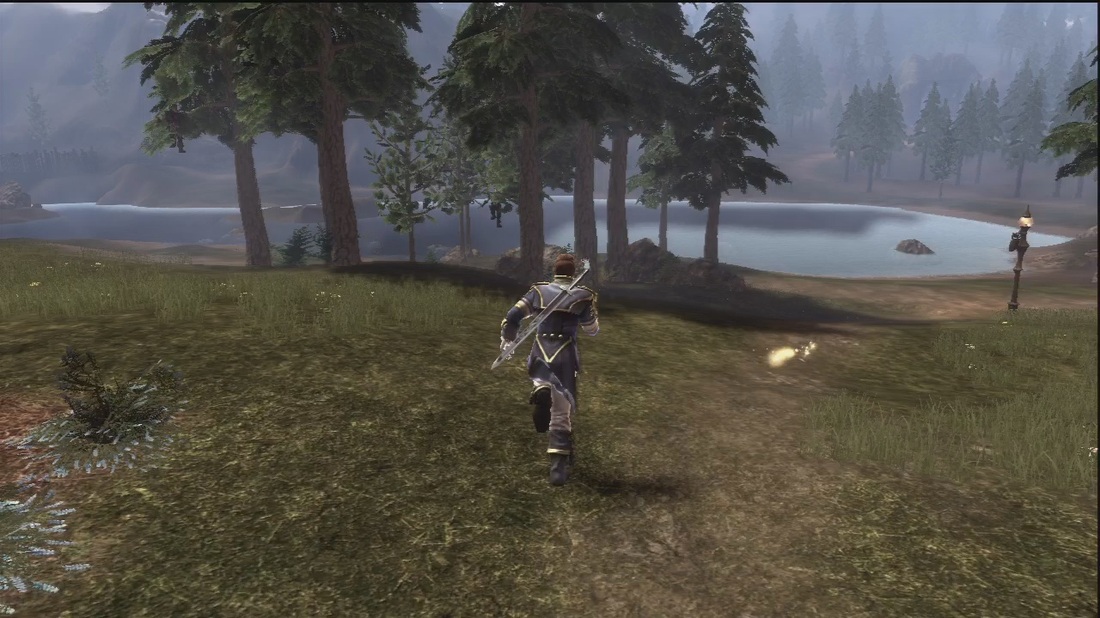 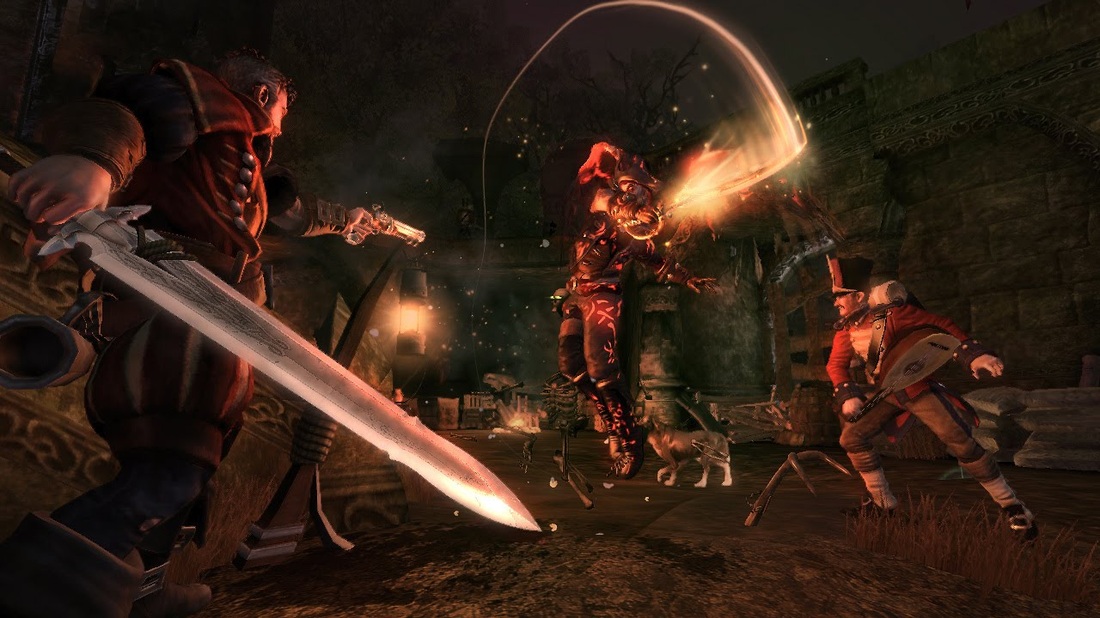 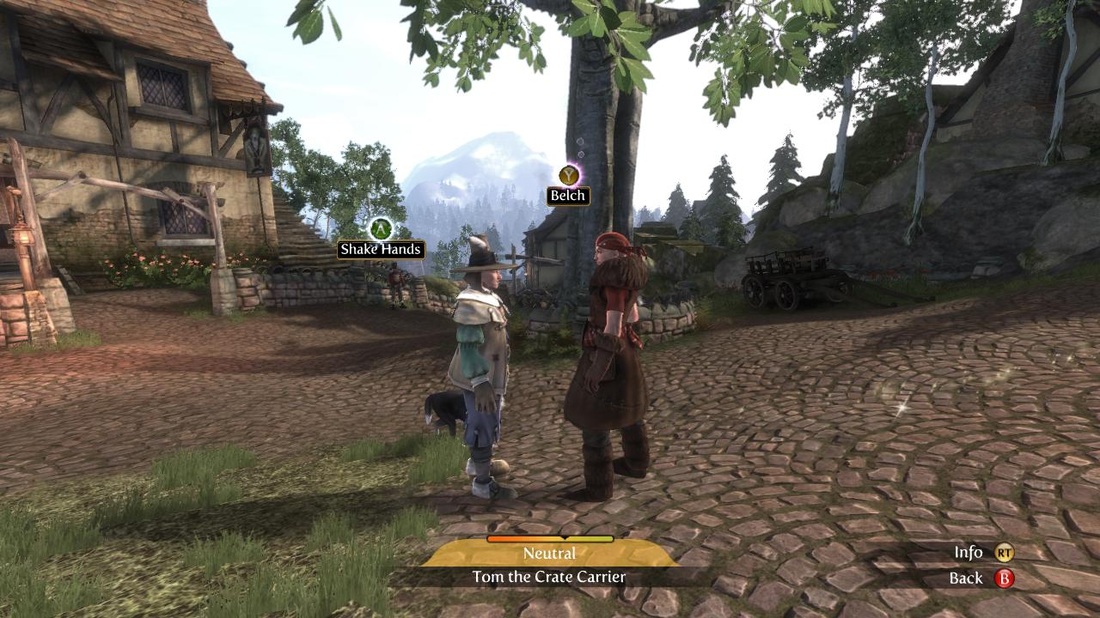 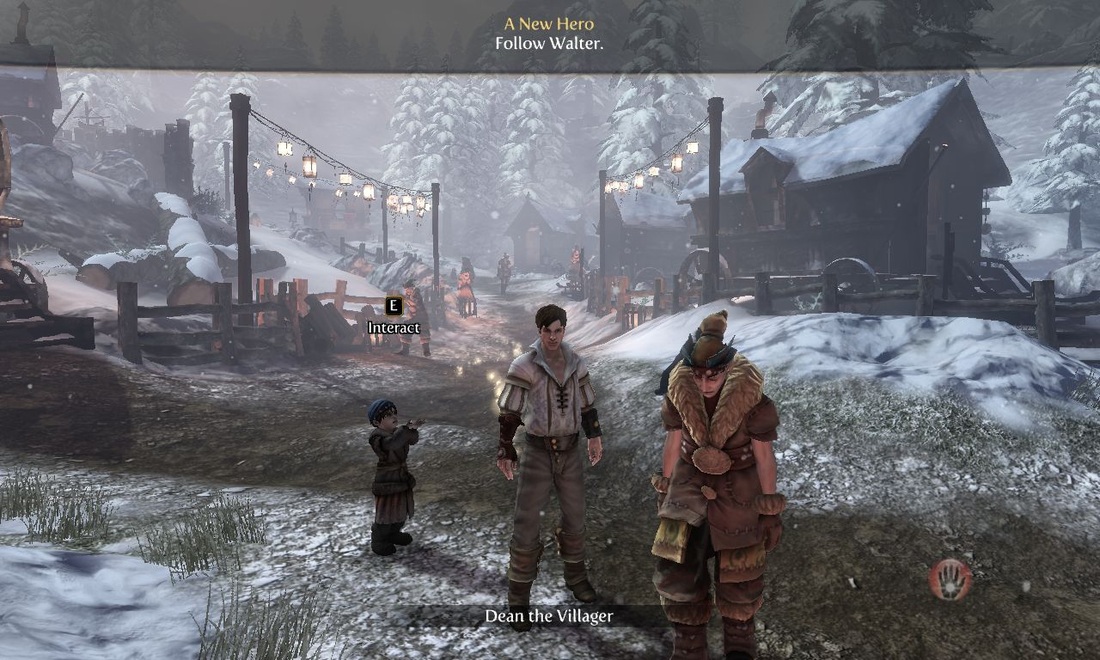 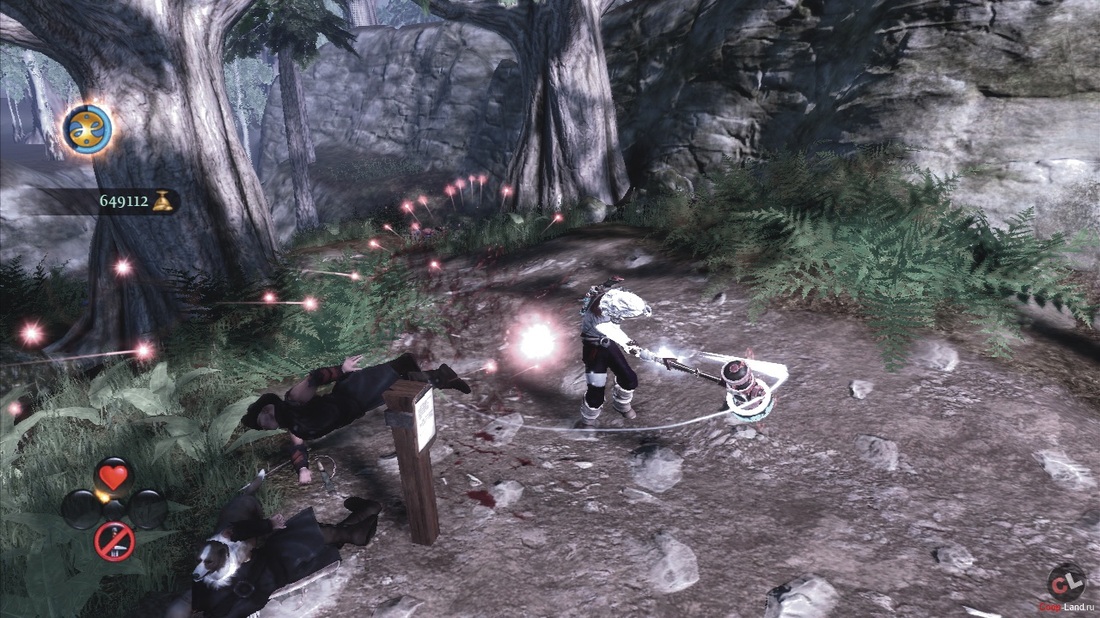 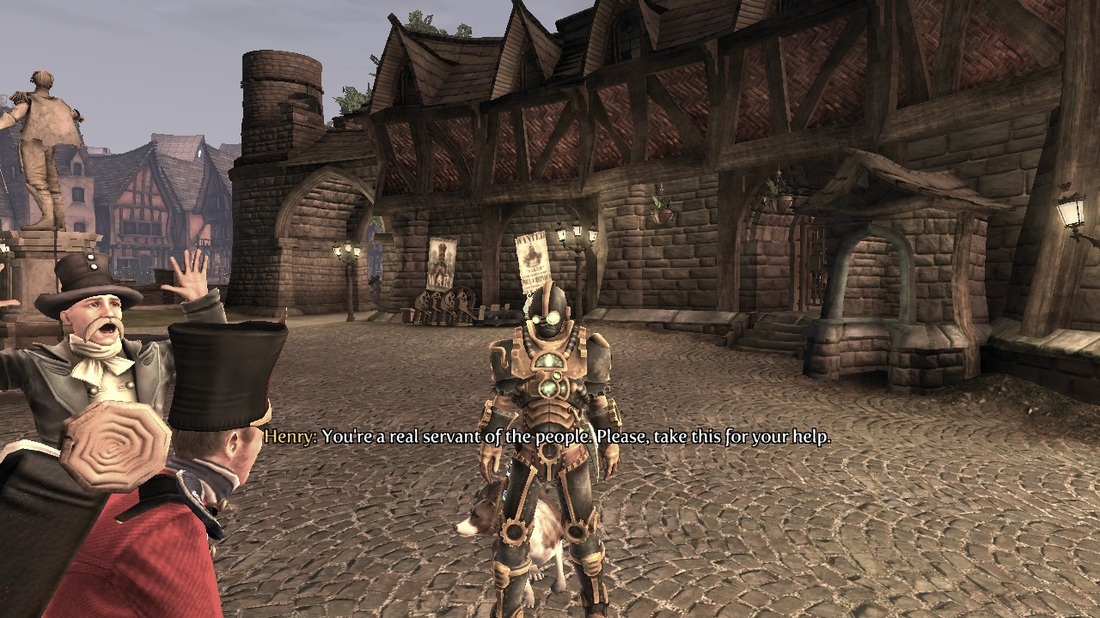