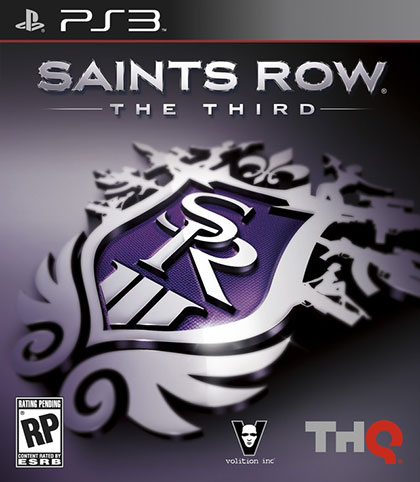 With the serious story of Grand Theft Auto IV, it seems that the series is going all realistic and leaving its crazy past behind. Parodying GTA IV, Saints Row: The Third is bringing that craziness back and kicking it up a few crotches to bring one of the wackiest and most fun games this year. Previous entries in the series have always been overshadowed by GTA but can The Third outshine the shadow and set itself apart?

After taking back Silverwater and merging with the Ultor Company, Saints Row has become top dog and started to merchandise. But after a failed bank heist, they soon land themselves in hot water as the bank belongs to a large group called the Syndicate. Lead by Phillipe Loren, he meets with the Saints leader to negotiate on his plane, but as usual all hell breaks loose. With the loss of Gat, the boss and Shaundi manage to escape and land in Steelport, finding their funds short. Deciding to pay back the Syndicate and claim Steelport, the Saints start their crazy rampage and massacres to take down the three gangs that make up the Syndicate: Morning Star, Luchadores and the Deckers. 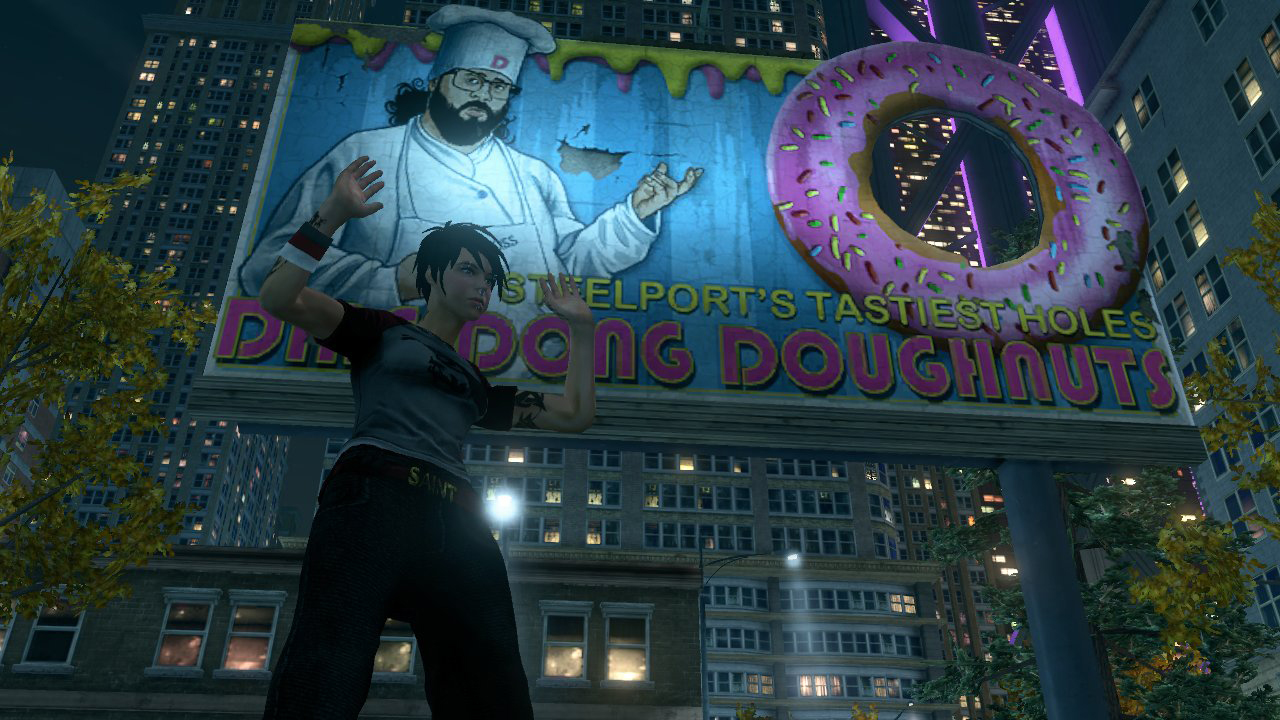 A few of the characters return from the previous game such as Peirce, Shaundi, Gat and of course- the boss. Peirce still remains as the funny bloke while Shaundi has a character overhaul from pot head to glamour model. The new palette of characters introduced is rather different and special to what we see in other games. They range from a former wrestler, former FBI agent and hacker to a revealing pimp and whiny little kid. This weird range of characters can prove to be amusing at times but start to break off since their backstory is hardly revealed at all.

With a new city and setting, it can bring new opportunities and ideas to the franchise. One opportunity that didn’t impress was the story. Nothing too much will be revealed, but the story as a whole is very thin. Many clichés are thrown around but into epic proportions, and many of the missions are not tied. Many of the story missions are not connected to one another and the plot as a whole feels disjointed. Personally it didn’t care about the story or plot at all, I just wanted to run around mindlessly and have fun- it delivers.

The gameplay is similar to many open world games this generation. In the third person view, you can shoot, punch and grab anyone walking about. On the UI, you can find many simple things that indicate various systems. Your health and sprint meter is found around your current weapon. Your minimap is also an indicator for both the notoriety from both police and the rival gangs. The top that appears frequently is your respect level- all from the precious games.

You can run around Steelport stealing cars, shooting people in the face, buying businesses, flying crotch into pedestrians, become a zombie- the list goes on. This vast amount of crazy would usually be complicated but it is kept relatively easy to use and understand. Everything you do in the city- good or bad earns you respect. Adding RPG elements, your respect level will have a RPG impact with the included levelling system. Each time you advance a respect level, abilities and perks are unlocked to purchase on your phone. The phone is still the primary function as a menu from other the second game, but now is much cleaner and simple compared to the clunk in Saints Row 2. Weapons too alos get levels, when upgrade become more awesome and hectic. 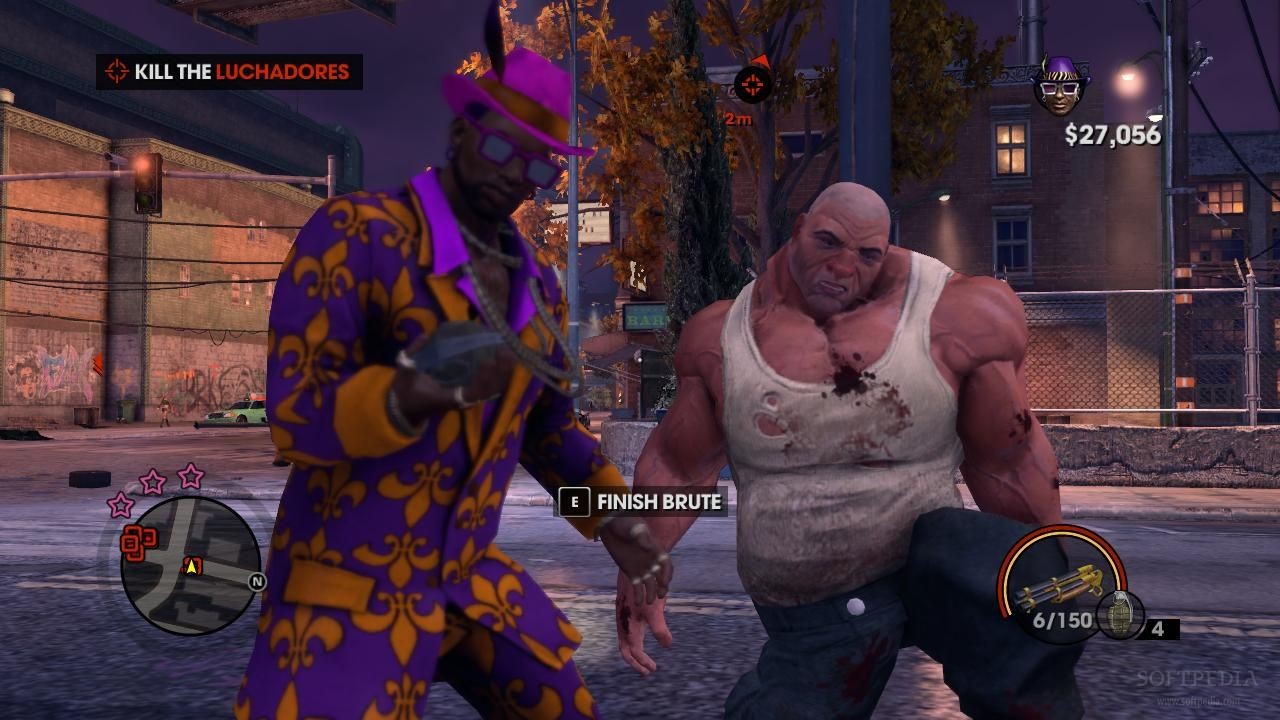 One of the first striking things about this game is the insane amount of customisation to your character. THQ released a demo to The Third called the Initiation Station which is the in-built customisation system in the game. There are tons of options to customise your character any way you want, and many of them are out right stupid. Become an overweight green hulk, a shrill yellow Pikachu or some woman with massive set of arms- or breast- the possibilities are endless, and sometimes freaky. You can dress your character any way you want with the few clothes store available in the game. This adds another layer of stupid and one way to personalise your character to your liking or to make the cutscenes funny and crazy- which your customised character appears in customised.

When you’re not busy causing havoc to the city, you have businesses to take over and missions to partake. The business side of things is how you’ll earn most of your money. There are businesses all around Steelport and most of them sell items and services to you, and if you buy their store- you get 10% of the price as an hourly income and a discount in store. Also, going inside one of your owned stores or safe house will negate the notoriety of the rival gangs and cops. Rather than going to your safe house to collect your hourly income, technology has advanced well enough in The Third to let you pocket your money straight from your phone.

There are two types of missions- Story and Activities. The story missions are vary varied, short and fun to play through. Plus you do not need to build up your respect meter to advance to the next story mission which was a terrible grind in the second game. The activities are pretty much the same as the last, participating in crazy stunts and fun where you earn respect and cash. As you complete each activity a new much harder activity is unlocked for more rewards. These activities are hidden throughout the city and will need to be scouted before entering. 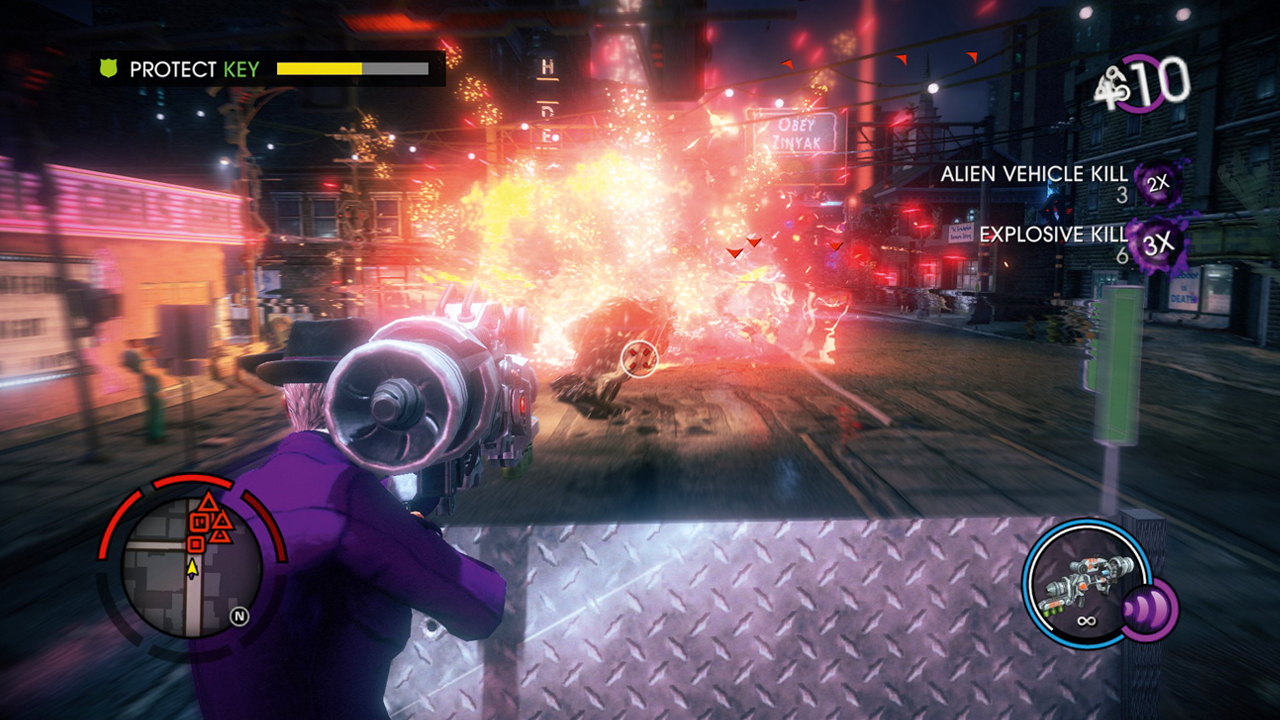 Steelport is different to Silverwater; it has a much bigger infrastructure and a larger business district. With a similar build to GTA IV’s Liberty City- with three main islands and two smaller ones- you can really tell it’s a parody of the former. The city is split up into 3 sections, which is filled with activities and buisnesses .Each section of the city is conquered by one of the three gangs, and it’s your job to send a message and take over their turf. It isn’t going to be easy but the city takeover is doable by buying businesses, taking out enemy gang operations and completing activities.

Despite the new city and engine there are a couple of technical problems that bothered me. There were many pop-ins that got rather annoying when travelling fast (you do that a lot) and would cause some serious issues during missions or free roam. There are many sound issues in the game, usually with the car. For some reason the cars either have a muffled engine or none at all. Everyone wants to hear the loud engine of an extremely pimped out car but the issues beg to differ.

The controls are reworked and refined to more fluid and intuitive. Everything about the controls feels much better and streamlined but the weapon selection is still quite clunky. It uses the wheel system from the second game and It gets rather annoying during combat, when you’re moving your analogue around and selecting the wrong weapon, and get decimated. The introduction of the action button- which is pretty awesome- makes the game much more enjoyable. Why enter the car through the door when you can jump in through the windshield with the awesome button? The awesome button is basically the hysterical version of everyday task. Rather than punching someone why not jump and land crotch first in their face? 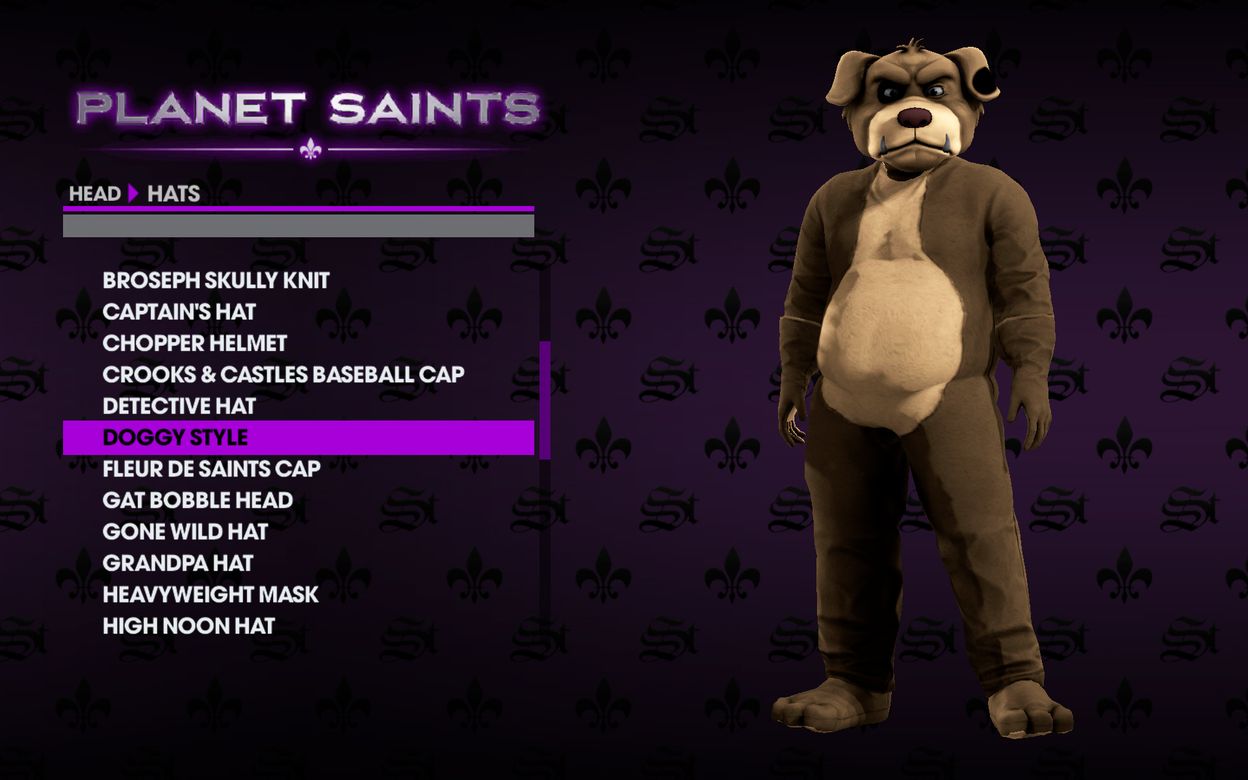 While Saints Row 2 focused more on the competitive nature of multiplayer, The Third focuses more on co-op and being able to smash your friends to pieces. With the entire campaign able to be played in 2 player co-op, many giggles are sure to be fired out of a cannon. There is also another mode called Whored-mode which takes the fun of the popular Horde Mode – and does it slightly differently. Each level is a new task and rule rather than successive rounds of survival.

The multiplayer for Saints Row: The Third is fun and twice as crazy as the single player. Co-op was something that was lacking in 2 and is done well here. Focusing more on co-op than competitive is a good move since 2 people wrecking havoc in an open crazy world- it can’t get any better than that. 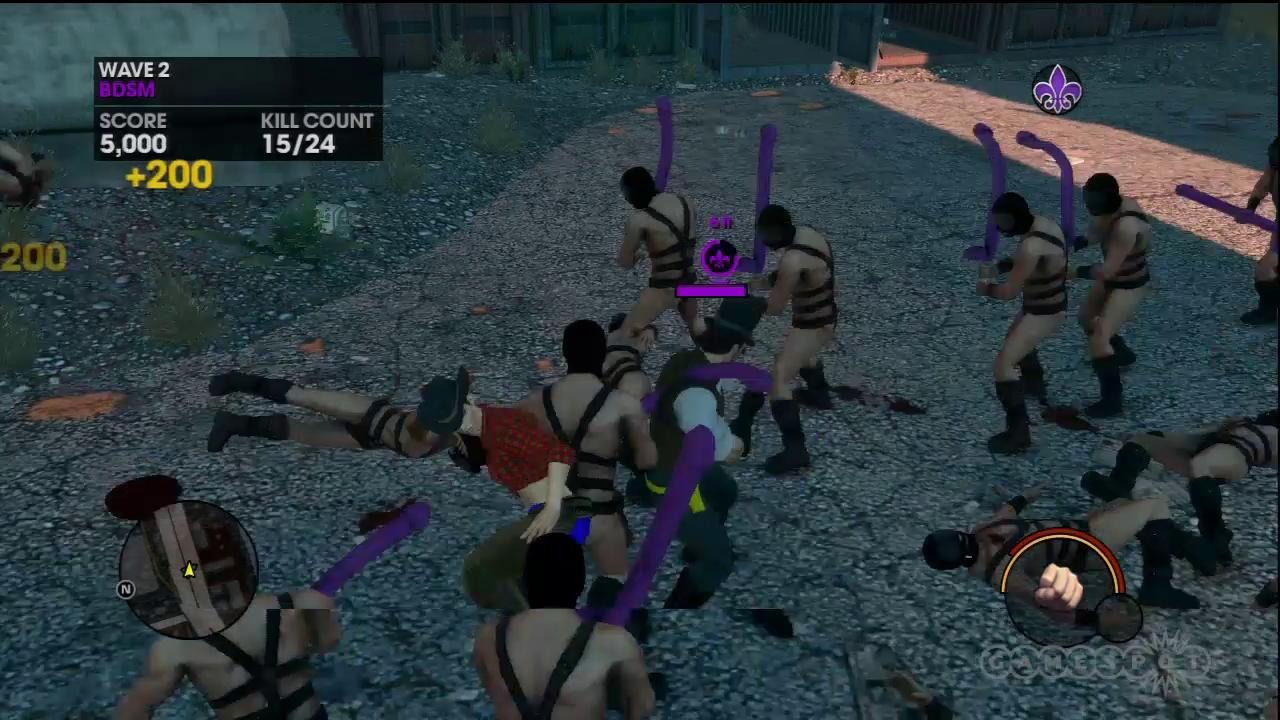 Finally we have a worthy series to rival the modern open world juggernaut GTA. Saints Row: The Third has proved itself that it can be fun and unique, returning to the roots that GTA left. The Third isn’t anything revolutionary or perfect but is very fun and a wacky sense of humour. The new RPG elements are a bit sketchy but still welcome addition. Together with crazy situations and abilities, the gameplay is never dull when you’re with a friend. Saints Row: The Third gives you a good taste in your mouth, then stuffs it with a grenade and smacks you across the face with a purple dildo, good times. 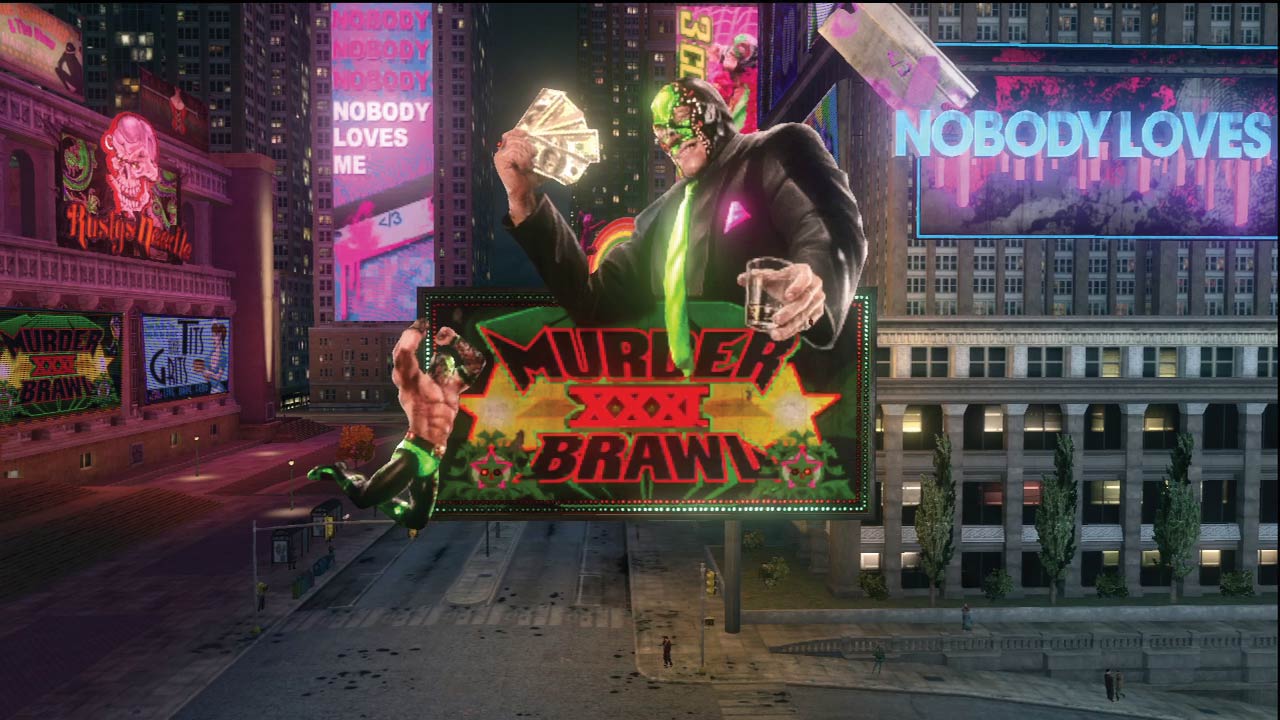 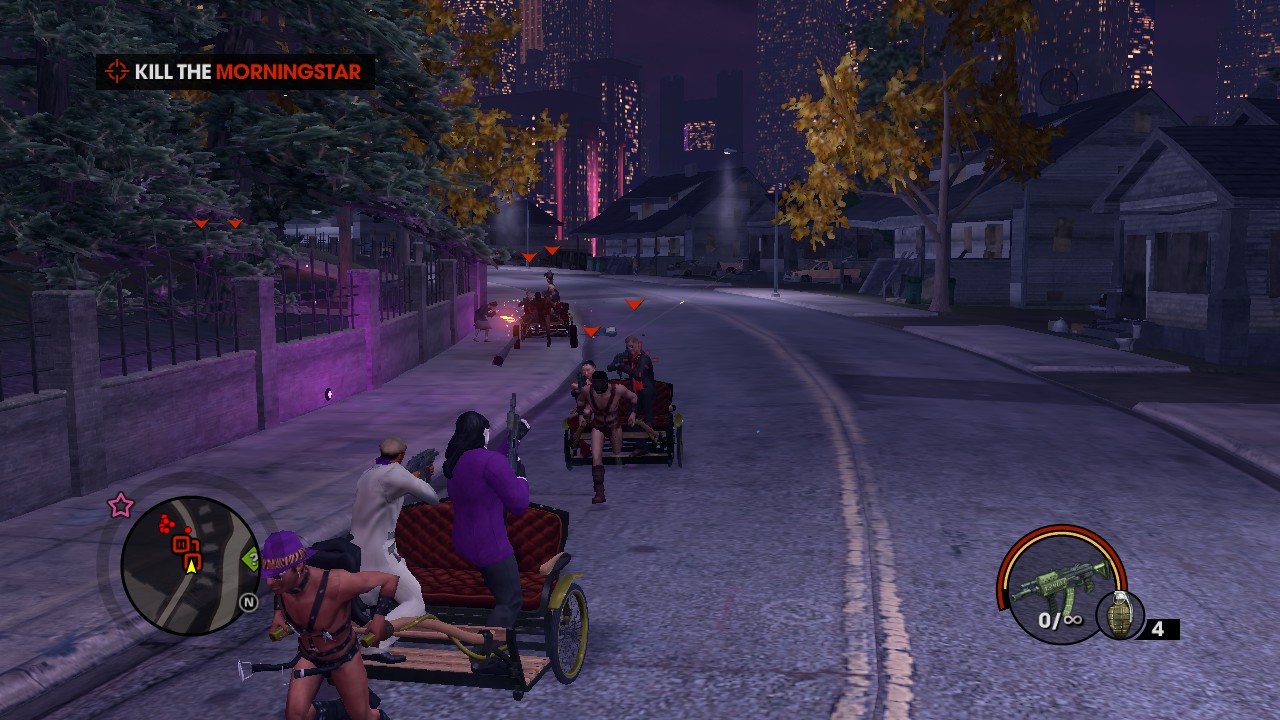 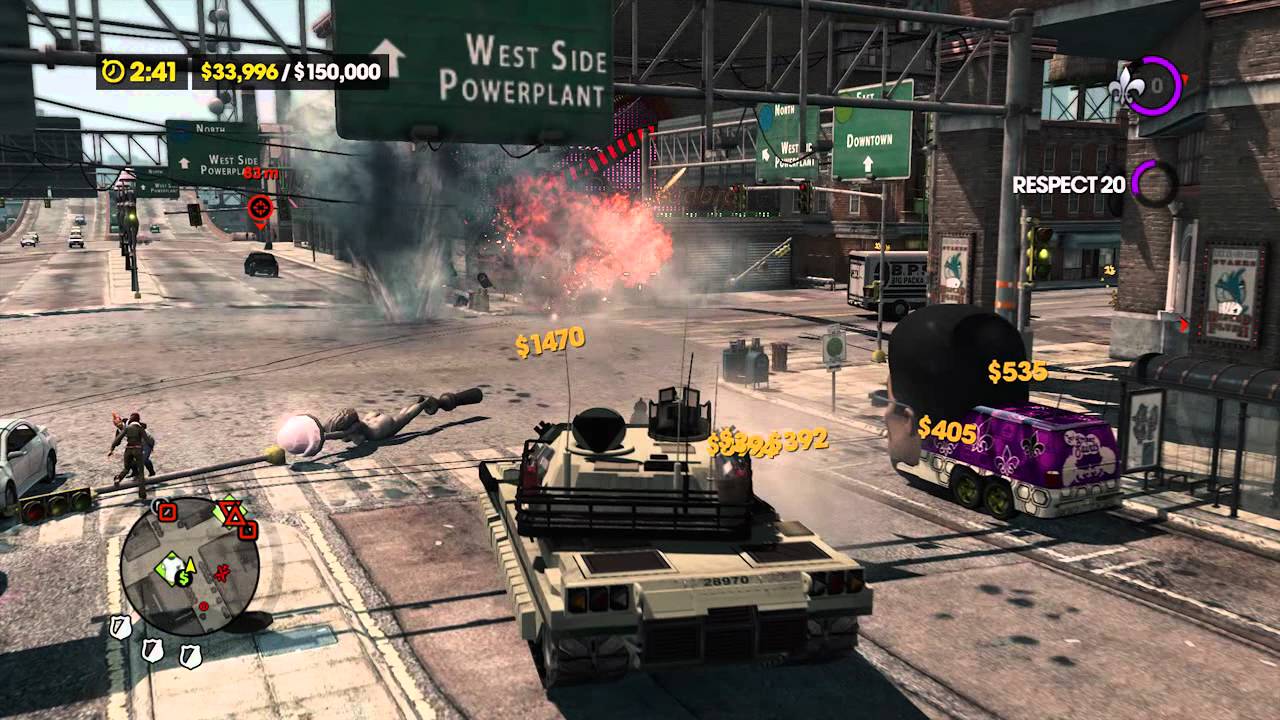 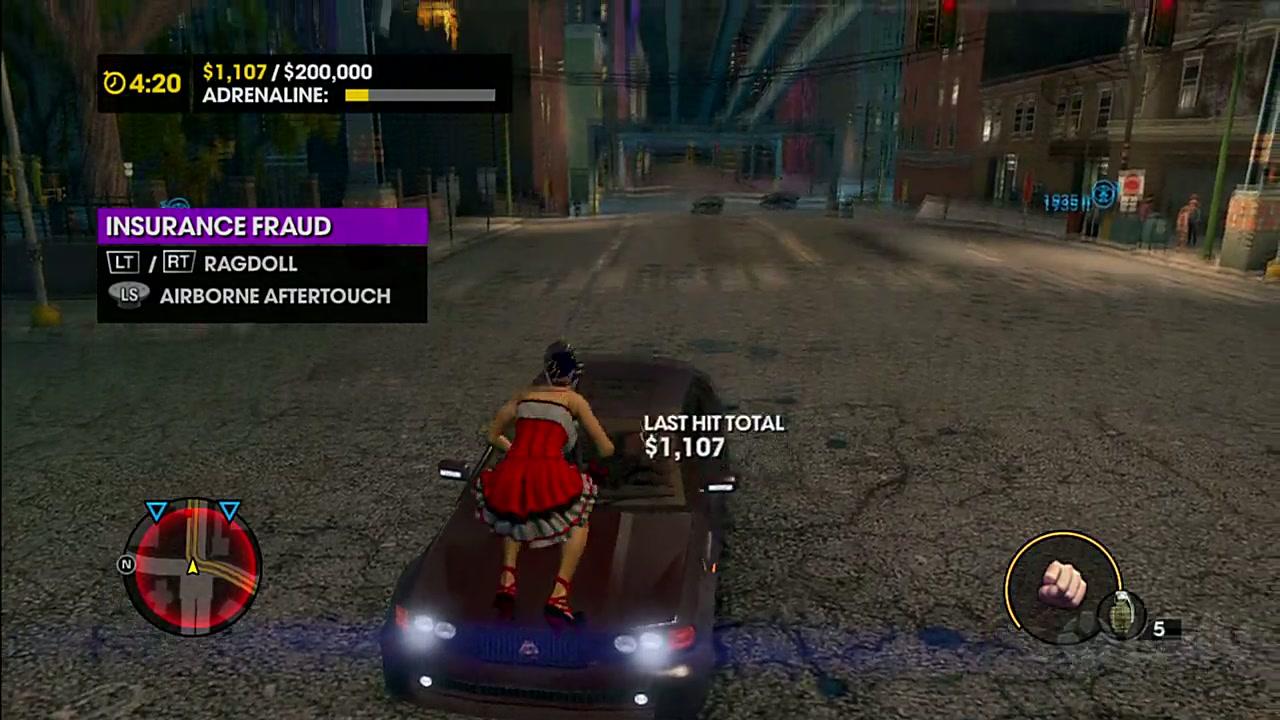 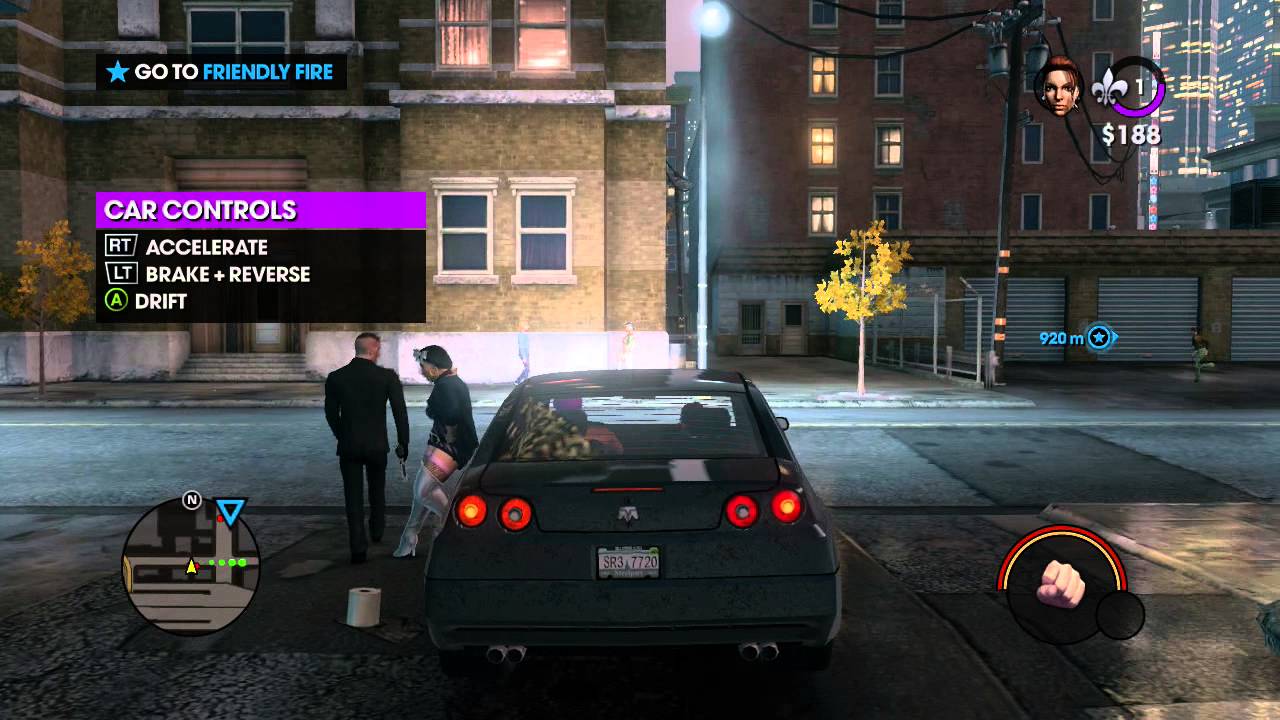 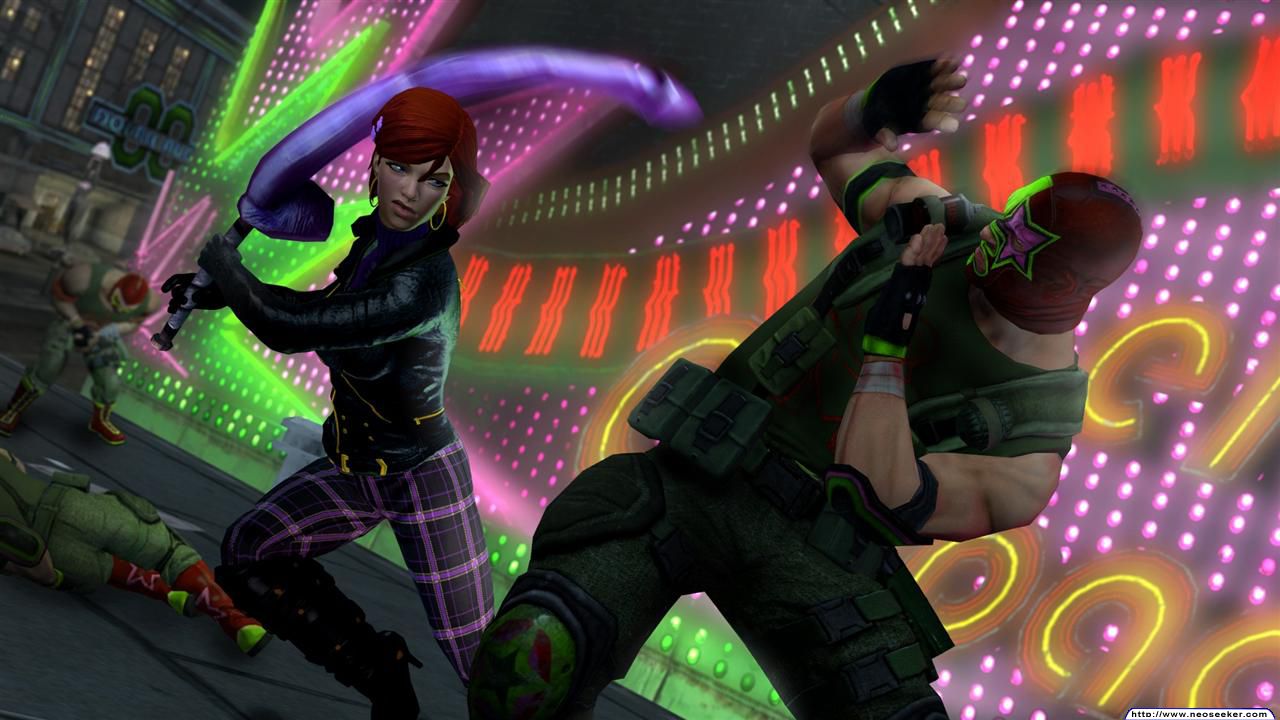