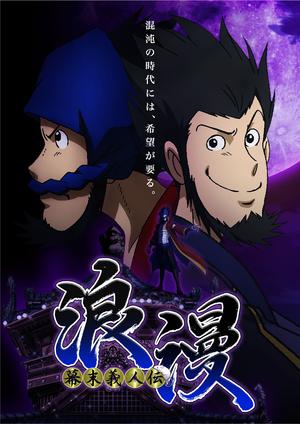 Escaping from the typical moe ‘fun is fun’ genre this season, is Bakumatsu Gijiden Roman- Bakumatsu henceforth. The anime doesn’t follow the current trend and offers a relief for viewers who want a break from cute girls doing absolutely nothing. Though, variety is the spice of life, Bakumatsu is my first serious contender for an anime to drop this season. Why is that? Am I just a moeblob? We’ll find out. 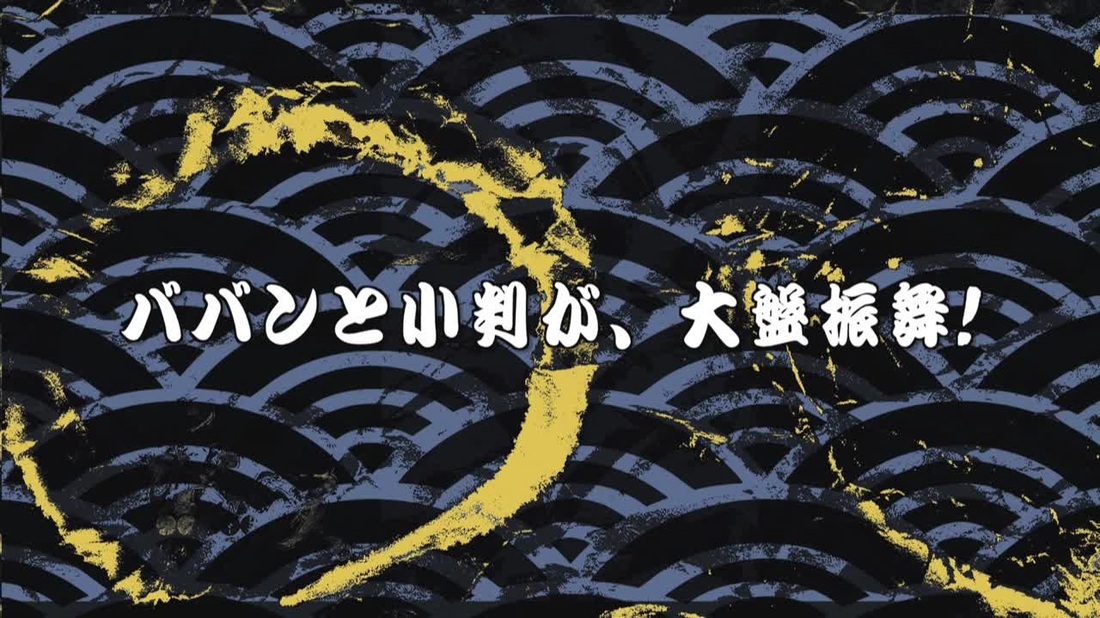 The first episode of Bakumatsu starts off with the traditional music from the Edo era, ringing bells that this is set in those times. We se that the village is on high alert- with spotlights made form fire- and a rich man under stress. Then we meet two thieves, one- a lady- reveals herself after finding some sort of key, and the other- a man- gliding about in the air, because you know- he’s a thief. Then we meet some large guard with a keyblade that fights the stealthy theif, in which we learn that their aim was to give back the gold that the auditor stole from the commoners. So it’s like a Robin Hood-esque story. All of the auditor’s gold is loaded up into a rocket- remember, Edo era- and launched into the air and explodes, to let everyone catch the stolen money. Then we meet the two perpetrators, Roman- who is evidently dreaming about running away with the princess, and his sister Koharu. We also meet other members of the village; a kid named Genta, his father Oyakata, the master of disguise who got naked for 2 seconds Banya, a guy older than Master Roshi and does some sciency stuff Hiragi and Doctor Hans. There are also a couple of villains introduced who are dispatched easily, who are recruited by Auditor Yoshiyasu. 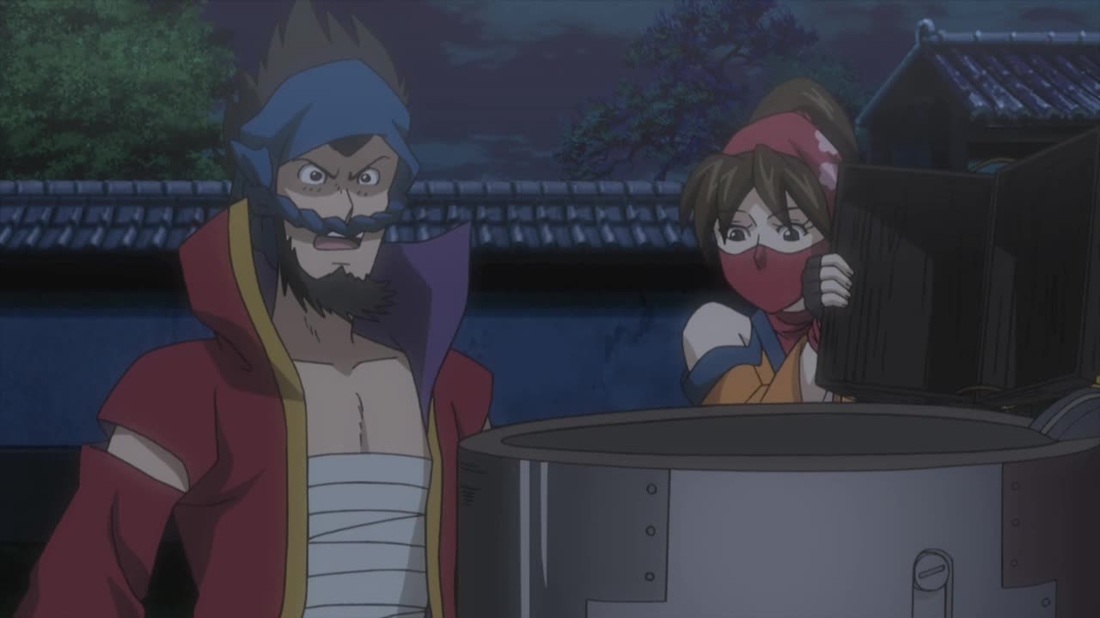 The entire episode sets out Roman’s nature of being a helper- he is named Mr. helper as well. During the daytime he is pretty much a big name throughout the village who is able to help anyone. In the beginning, we see that Roman plays a similar role to Robin Hood, robbing the rich to give to the poor. The episode sets up that Roman is willingly to help anyone no matter the task, even though he seems kind of thick sometimes. This pretty much sets up how villainous the auditor is, since most of the villagers are just normal peasants who work hard but get screwed over by him. While Roman is helping people to gain some money, his sister is busy tending a decorative chopstick shop- like that will have good business. Roman sucks at gambling and loses most of his profits there. The other members; the doctor, old man and cosplayer- master of disguise but the former sounds better- are all part of some group that act on the wishes from the shrine. These are usually related to the auditor, and so the group work together to find a way to screw him and his money, while finding some other mystery.

The auditor seems to hire two mercenaries with stupid faces and long hair. The auditor uses them to essentially extort the villages and have them pay a tax for protection. Ladies and gentlemen, the first tax-based government has been set up! Apparently Roman can transform when he is in his costume that hides his identity, or not since the only thing covering his face is a string. He transforms into a power ranger. Yea, that’s right. It strange that he does so, introducing some form of supernatural powers to the series, which seems off putting. Regardless, super Roman take the two hired goons out and chops the auditor’s tower in half. Then some guy on the ship is meddling about how he wants to steal their sakura trees. Yep, they want to steal the village’s sakura trees. 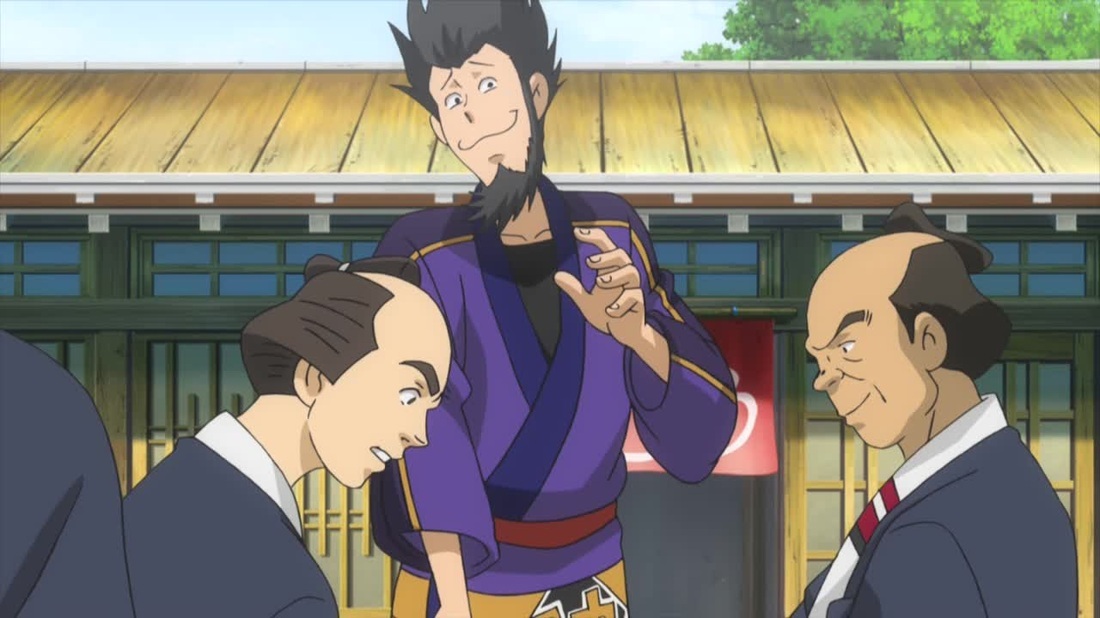 The episode seemed to have many attempts of comedy, and almost all them seemed to whoosh over my head. They seemed kind of childish and lack any taste, well none that I find. Most of them are repeated jokes from time yonder. The episodes is lighthearted and seems to have the common affiliation that Robin Hood had, but with Super Roman appearing it just seems odd. The episode doesn’t seem interesting until the final moments where we meet some more villains but yet again stealing sakura trees don’t really fancy my tickle. The plot as of yet, doesn’t seem complicated or would be at this rate, since it does really seem like an anime for young children, not that it’s a problem but I found the characters and story so far, dull. 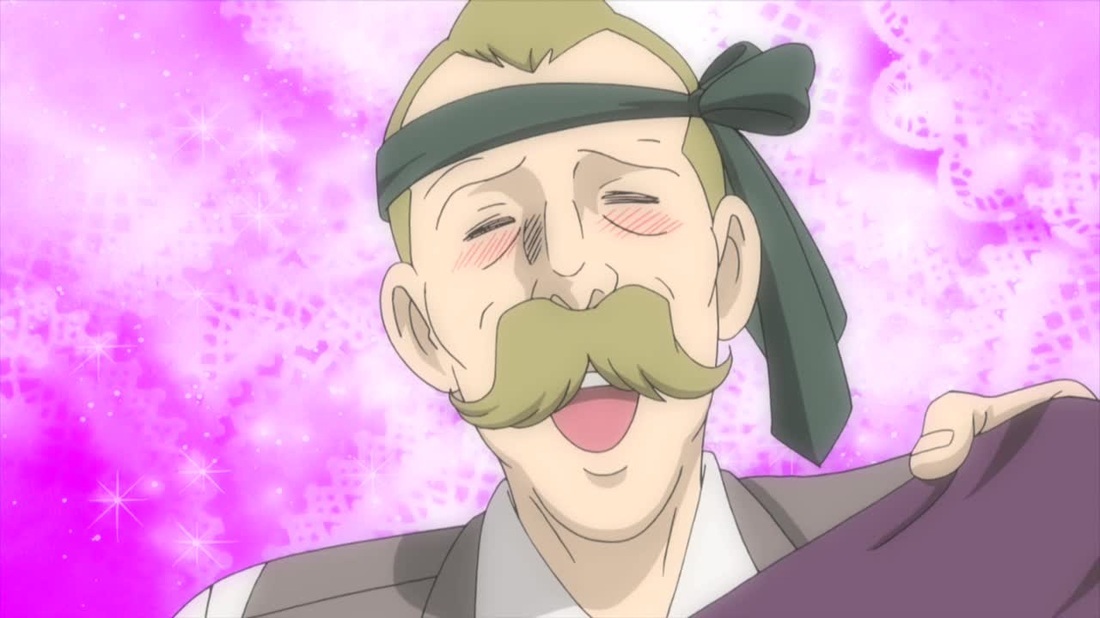 And here is the less enjoyable part for me, the animation. I did some research and found out the designs are done by Monkey Punch who did the created Lupin III. I haven’t seen that series and based on the designs of Bakumatsu, I may not. The designs seem very off putting and rather old. The designs have actual round, circular eyes that existed decades ago- remember it’s the 2010s. I mean Roman’s design is bad in my eyes, and when he smiles it just seems to infuriate me for some reason. I don’t really enjoy the character designs and it really stops my enjoyment of the anime. That and the two hired mercenaries have annoying long faces and long hair. It’s like Sephiroth became super skinny and became more blocky. Despite this, the backgrounds and designs of the villages are quite nice, as do the sakura trees. The bright lights at the beginning were pretty too, though they look like neon lights, which to my knowledge do not exist, at that time- neither do power rangers but that happened. So the character designs are too old school for my liking- AND MY GOD THERE’S A DERP DOG. This dog, the one that has derpy eyes, why does it have derpy eyes. It makes me say ‘Mother Fkn Derp dog’ every time it appears. Maybe the Internet has ruined me, but the derp dog seems rather stupid since it has derpy eyes. I think the entire anime’s art direction is kind of derpy too- don’t kill me internet.

As for the vocal and musical department, Roman’s voice seems rather fine and so do the rest of the cast. There was no opening in this episode but the ending was. The ending credits had a rather catchy song and a amusing animated segment- the only part I guess. The animation is drawn like traditional art with the whole brush stroke theme. And the BGM throughout the episode was not memorable, maybe since I was too distracted by saying ‘FKN DERP DOG.’ 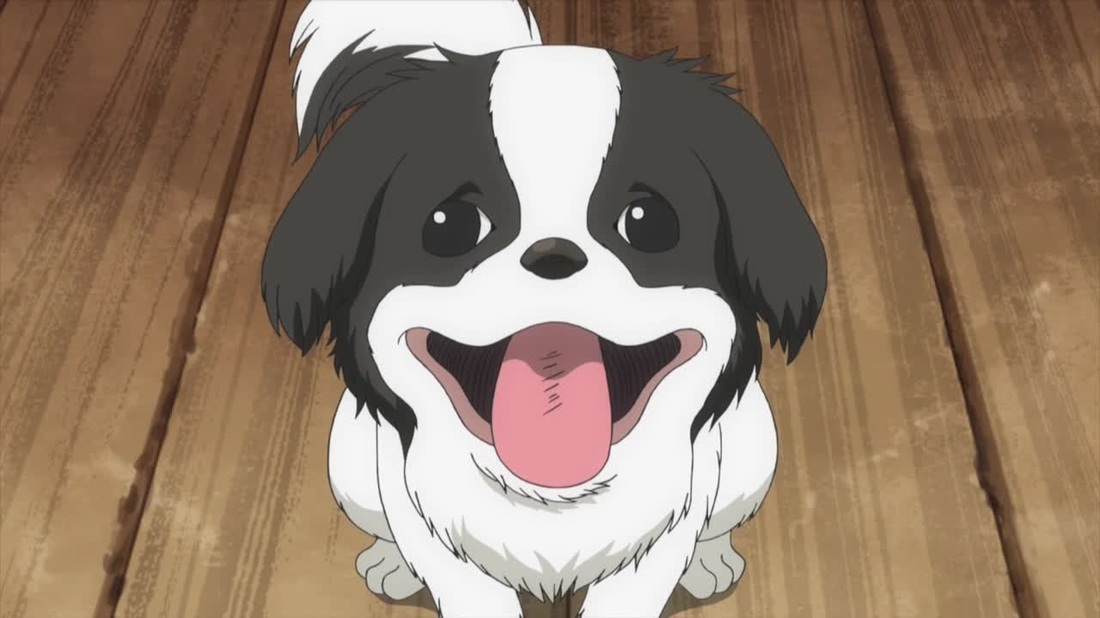 So as a whole, this episode was rather disappointing- not that I had any expectations but it failed to meet them. I cannot take the character designs and dislike them to a big degree. Nothing else seems to be interesting other than the final moments. The setting is nothing special, the jokes- if any- are lame and nothing outstanding occurs that grab my attention. The only way that I would keep watching this anime, is that the plot is stellar with amazing characters, pacing and twists. 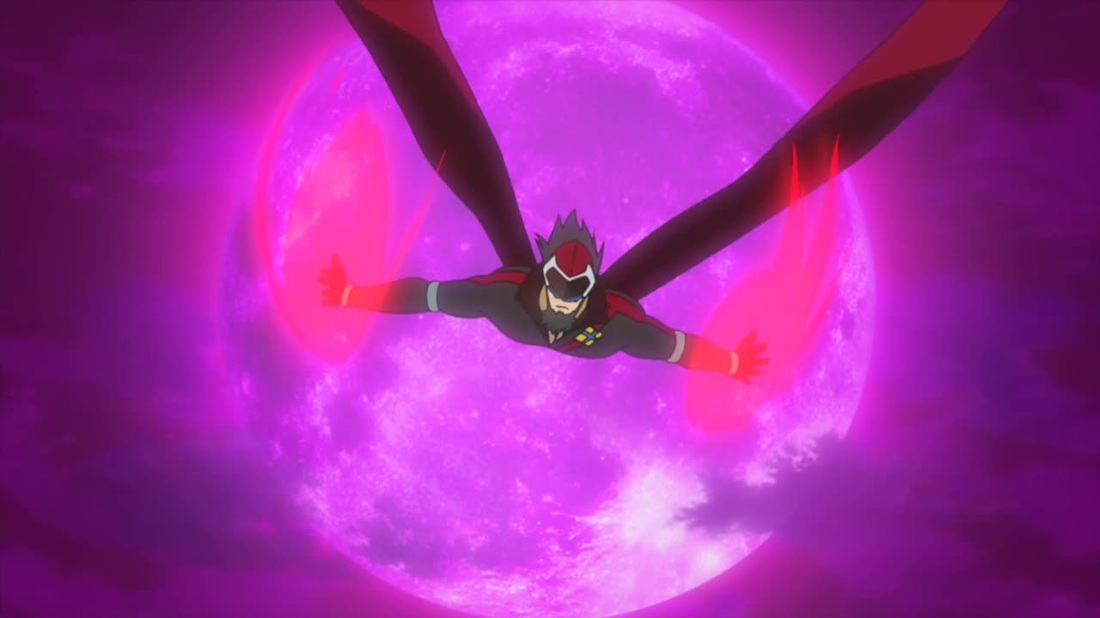 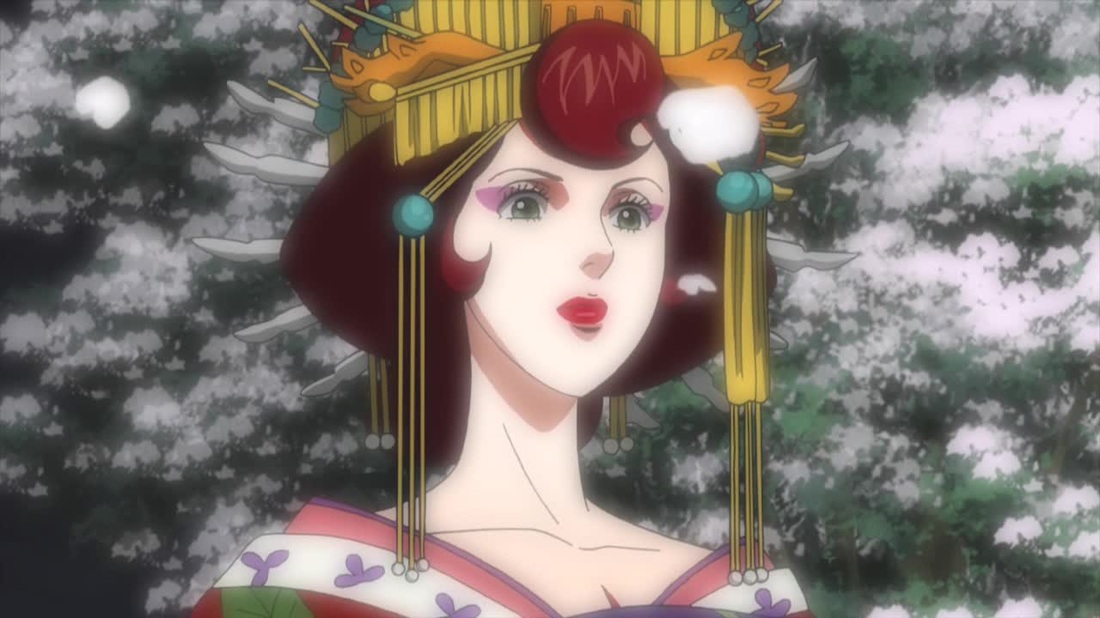 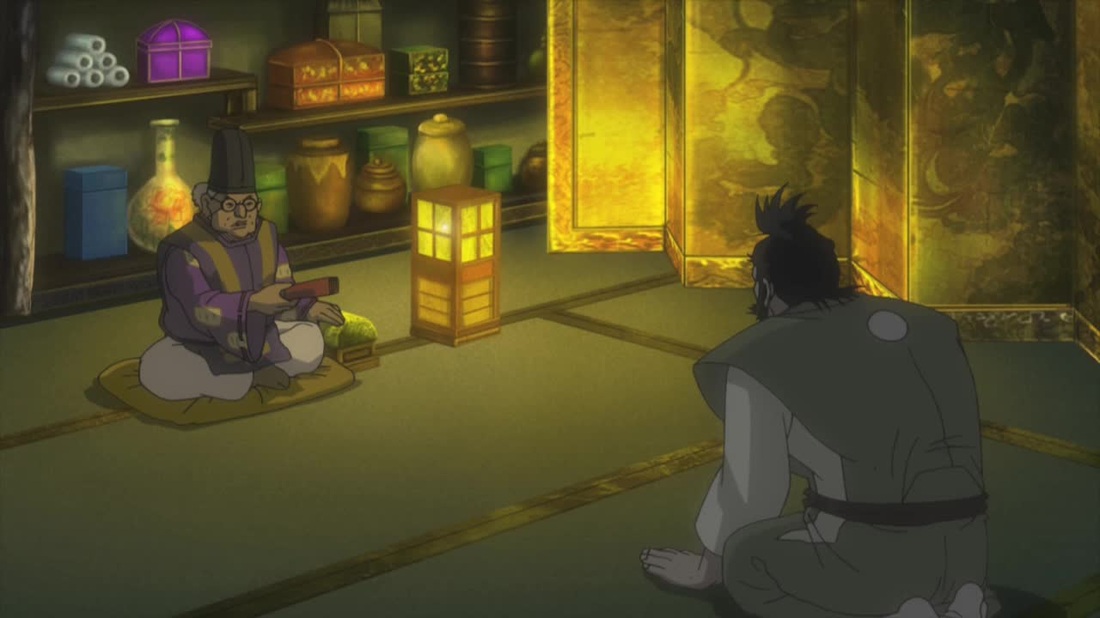 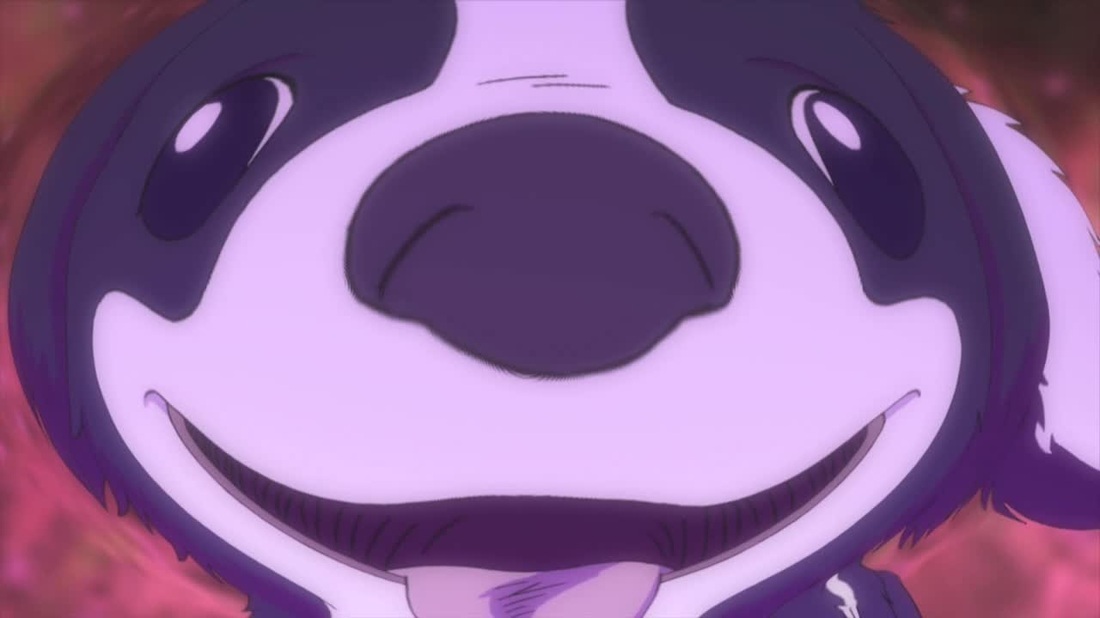