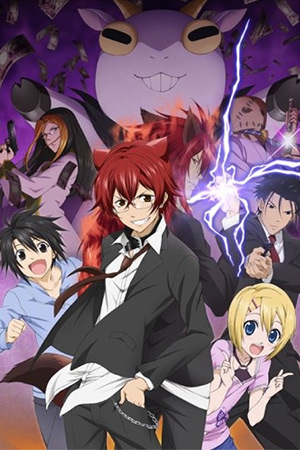 In a world where half-human, half-animal chimeras live and work alongside normal people, there are sure to be a few bad apples in the bunch. That’s where lone wolf detectives like Hiroshi Inaba come in. He’s literally part wolf and has the amazing ability to extract critical information just by examining or tasting a sample of someone’s hair! Of course, that ability has also resulted in Inaba having a little bit of a hair fetish, but that doesn’t seem to be a problem for his two assistants. And it’s nothing compared to the strange tastes of Inaba’s nemesis, the omnivorous (and half goat) crime boss Don Valentino, who has an appetite for green legal tender instead of tender young greens! Can sheer dogged detective work put the baaaaad guys behind bars?

Right, before I jump into this I mistakenly watch the second episode before the first. Somehow this happened but I will try to write the review on the basis of the first episode with no requisite – anyways the second episode is much, much better than the first. Cuticle Tentai Inaba/Cuticle Detective Inaba, or as I will call it Cuticle is another anime that is separate from the moe dominated genre from this season. Of course, judging by its name there will be some detective work in this anime, but what the hell is with the cuticle? 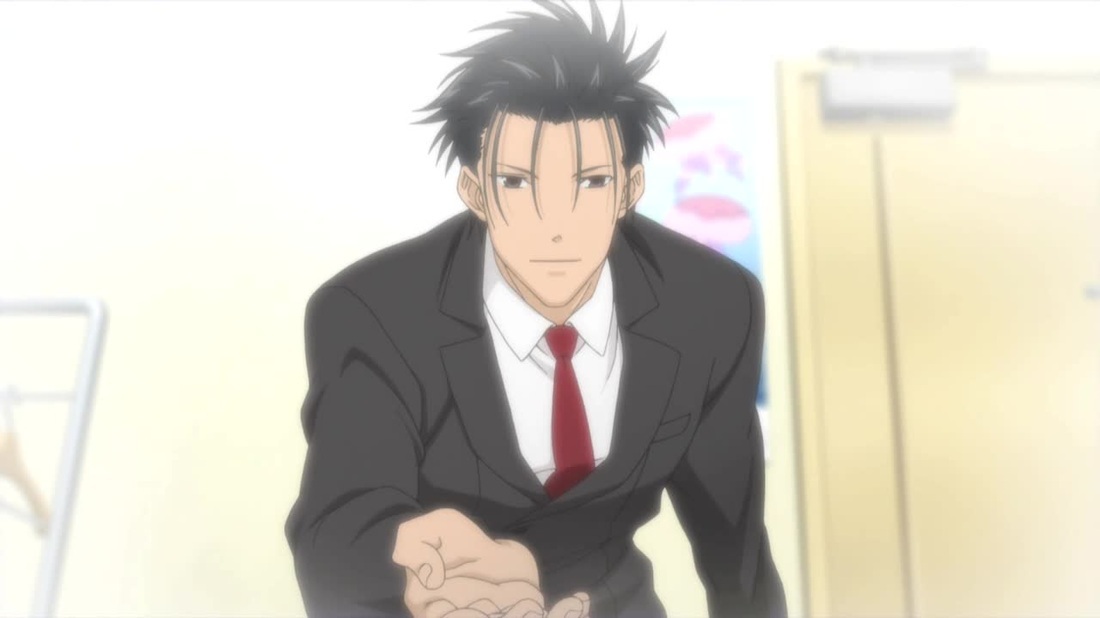 Cuticle starts off with a bank being robbed by the antagonist of the anime, and the stolen money being dropped everywhere-because that’s why people rob banks. The police are surrounding the building and one detective claims he needs the cooperation of another, Hiroshi Inaba. He walks to the HQ of Hiroshi and queue title card. The cool suave detective is Ogino, and he goes into the Inaba detective agency to meet him. Inaba seems to be a half man half wolf- werewolf- who uses his animalistic instincts to find criminals and whatnot, that and he has a hair fetish- which may explain the Cuticle in the title. In the agency we meet the crew; the logical Kei, a crossdressing man that has some hostile love for Inaba, and Hiroshi himself. We also then later meet the villain himself, Don Valentino, the goat. Yea, a goat Don who is in charge of some Italian mafia group. Alongside him is a man with a bag over his head, Lorenzo. The episode has all these characters overreacting to situations as Valentino is a horrible villain and don, which pretty much solidifies it as being a children’s show that runs at 4 pm after school. 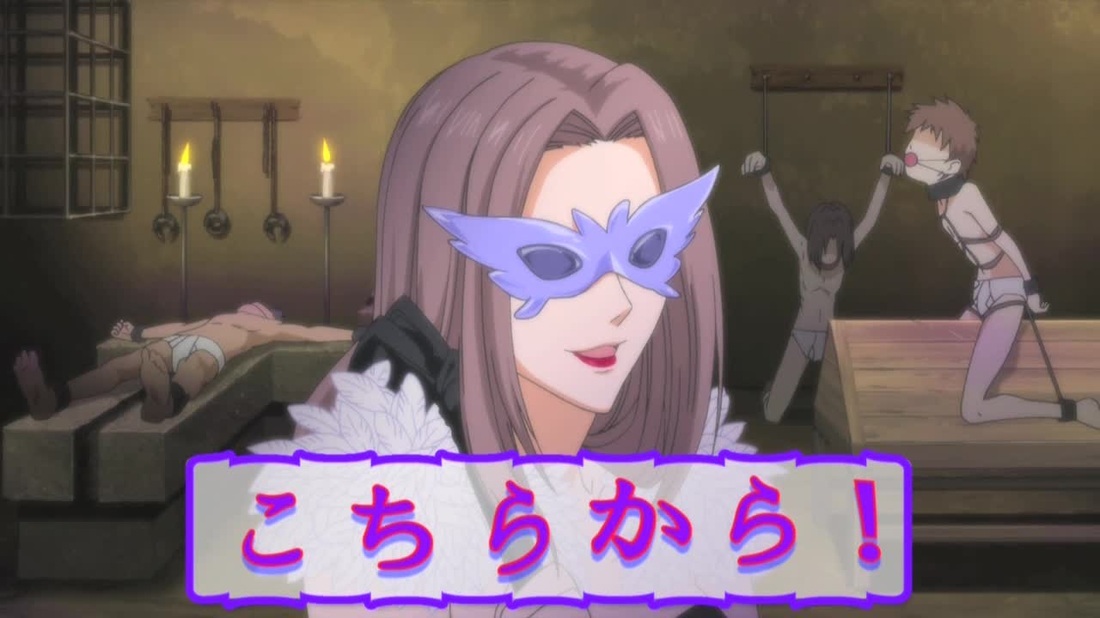 The episode is made up of two parts, which have separate stories- much like American children shows. They don’t have any correlation between each other and viewed as independent. The two stories in this episode: the first involves counterfeit money and stealing a bank, and the second involves a hired gun and some brotherly feelings. The episode has many over the top moments that plague childish anime- too much to for something complex- that usually parodies normal situation and other shows. The first story has the introduction of the characters and their relationship. We see the goat being rather stupid and stole the bank to eat the money- you get it? Cos you know, he’s a goat hahahaha/s- with the detectives charging in. Apparently, the crossdresser knows some super fancy traditional move that transforms Hiroshi into a handsome werewolf- since his normal form is more ductile and cute. Eventually after many shenanigans (ie. Ogino gets trapped underneath a fridge, Hiroshi dispels depressing thoughts causing the production crew to give up, bag man Lorenzo overly acting like some girl and trying to slice up Hiroshi) Valentino and Lorenzo escape in a traditional style and get caught by the police without a license. 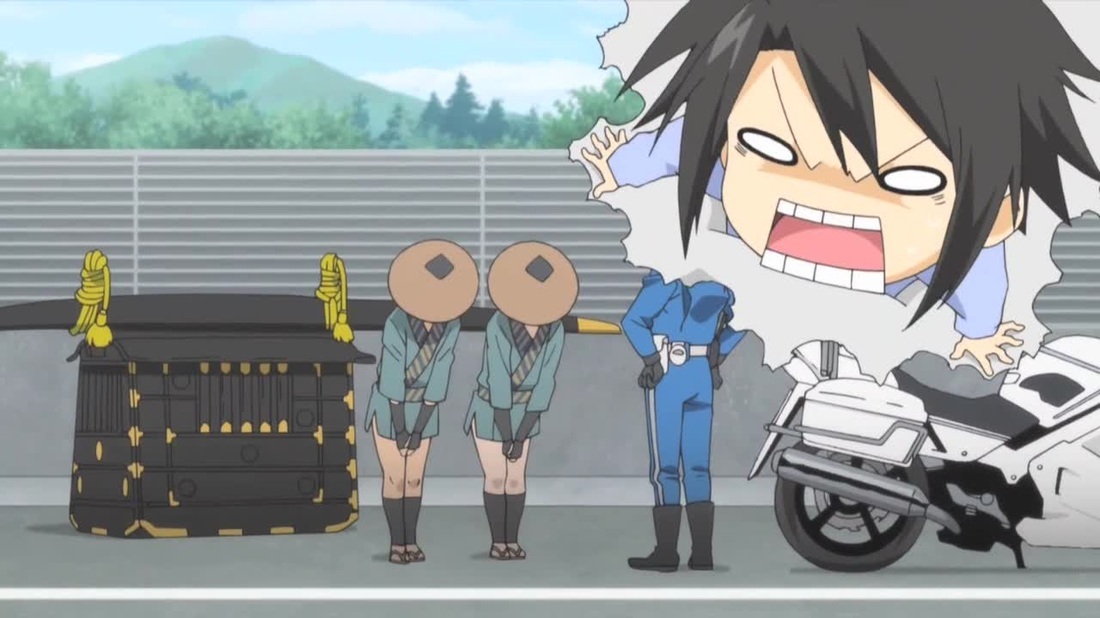 The second story is equally as random, with the introduction of Gabriella, who hunts down people with a certain height to become her minions. Valentino hires her to kidnap and kill Hiroshi and the way to lure him is with a ‘legit’ letter about being Hiroshi’s lost brother. Things happen, Hiroshi gets lost and Kei gets captured instead. Hiroshi eventually appears 6 hours later, gets caught and Valentino calls Ogino for ransom. Ogino is actually a very fatherly man with his daughter being everything, so Hiroshi pretends to be his daughter caught in captivity and Ogino becomes some demon. More fireworks happen, the crew escapes and capture the goat. Ogino appears and the goat turns out to be a goat.

The episode is pretty much a crap ton of jokes thrown in one, most of them aimed towards a younger demographic. Many of the jokes could be unfunny to more ‘’’mature’’’ people but I did get a chuckle now and again- compared to the second episode it was boring~. It seems odd that Hiroshi can transform into a super werewolf but I guess it’s for the random action with random consequences segment. The characters have some good chemistry and are quite interesting. The two stories themselves are random and offer some unique and over the top situations. Regardless, most of the episode with its randomness and jokes were amusing. 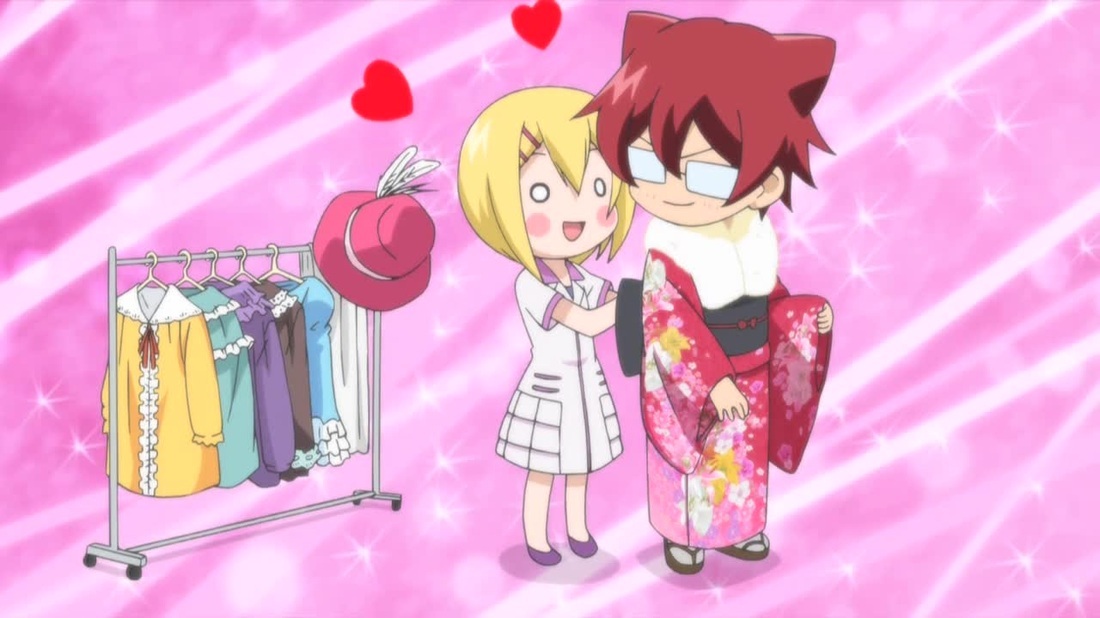 As for the animation, many times the characters transform to their chibi mode- look at me, I’m small, cute and adorable and do random things LAUGH AT ME!!- to gain more of an amusing aspect, and it works for the most part. The reactions and facial expressions during these moments are fine and exaggerated to a point. The character designs themselves are nothing special, but the bagman adds some rather interesting spice. The backgrounds are fine; there is no dominant palette or hue to the episode so nothing is at fault.

As for the musical representation, there really isn’t anything memorable as for background music. There is no opening present in this episode (there is for the second) and the ending seems to be a parody as well. You know its pretty much a children’s show when the villain sings traditional songs for entertainment. The animation through the ending is typical over the top for the song and makes the villain’s personality and character out of it. 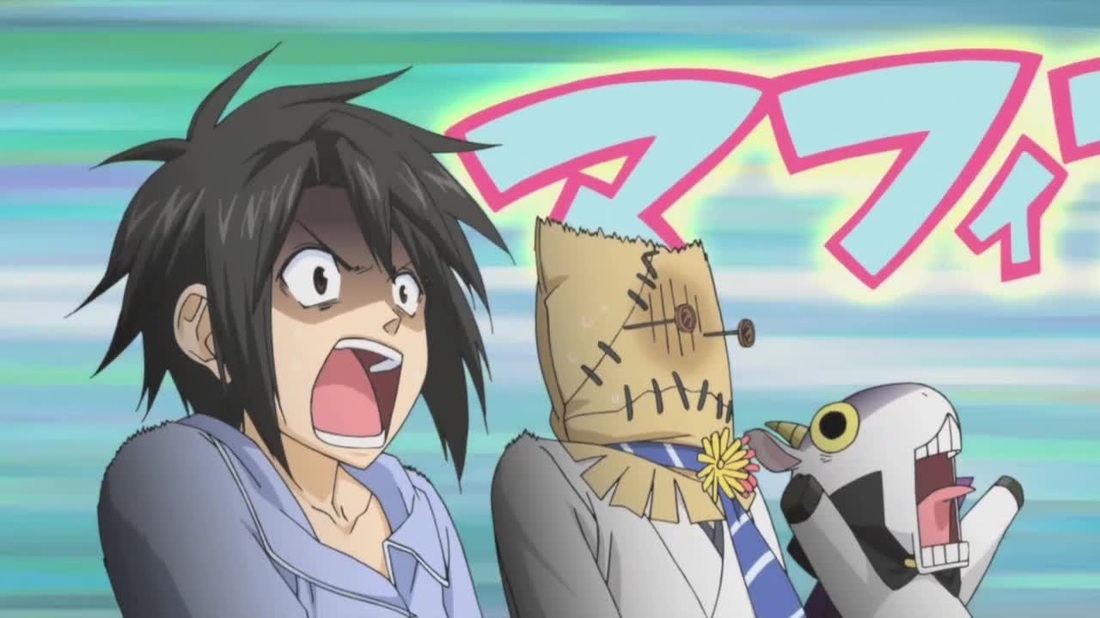 Overall the first episode of Cuticle was enjoyable. Some of the random events contributed to this and maybe some of the jokes and over reactions. It does have a certain charm about it. The characters are all interesting since the random events occur because of them. Though, many jokes do fly overhead the second episode is much more pleasant and amusing than this. On that basis- dammit, should be the basis of the first episode only- keeping this one should be no tough choice if you want something fun. 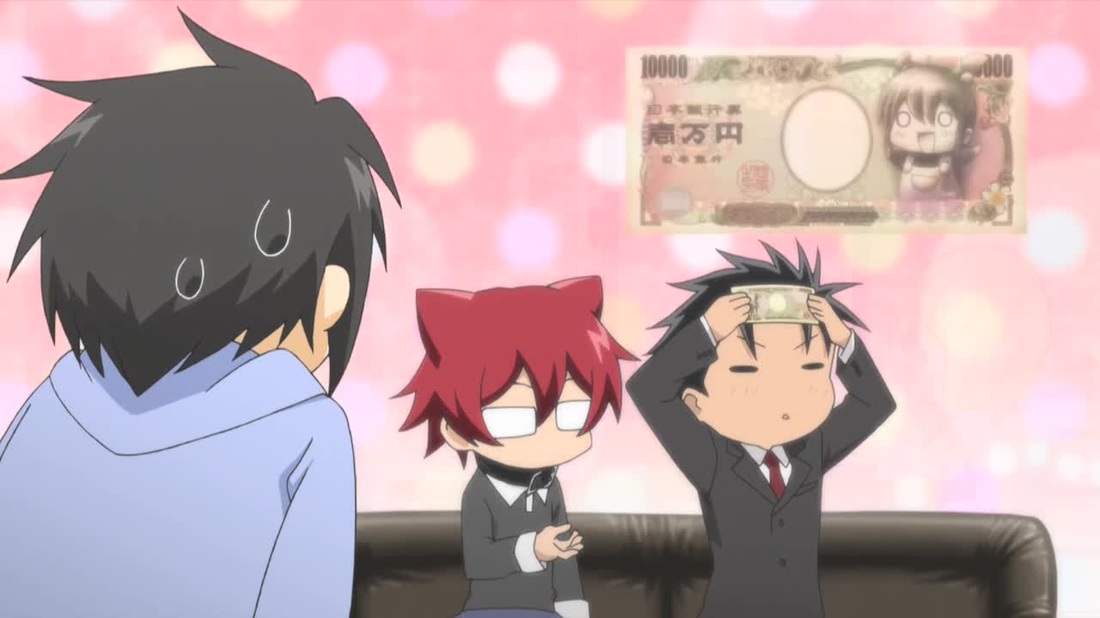 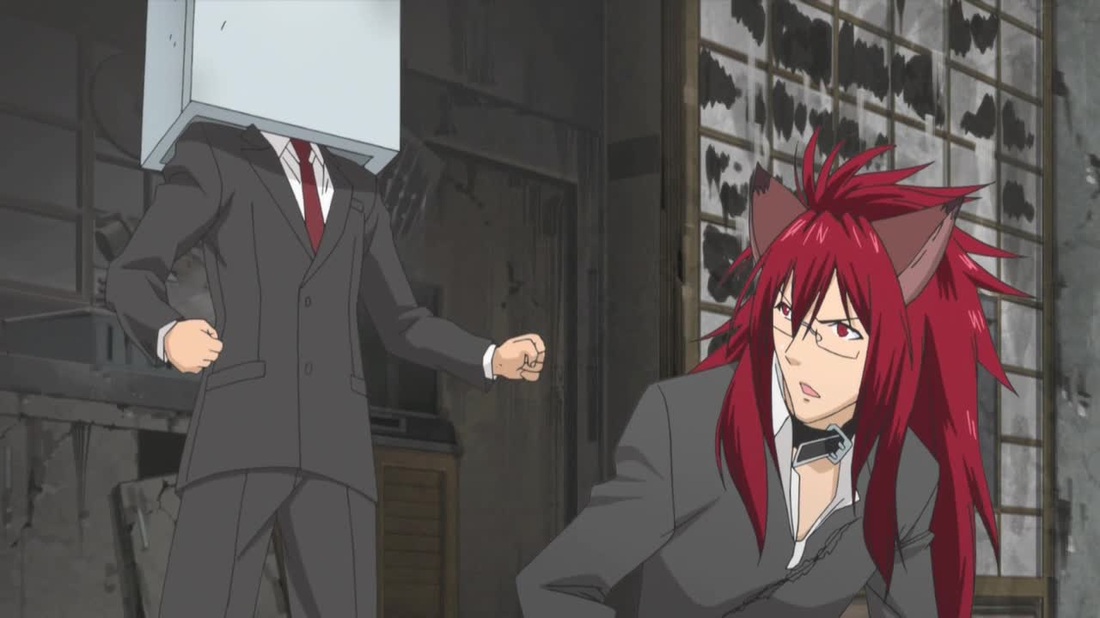 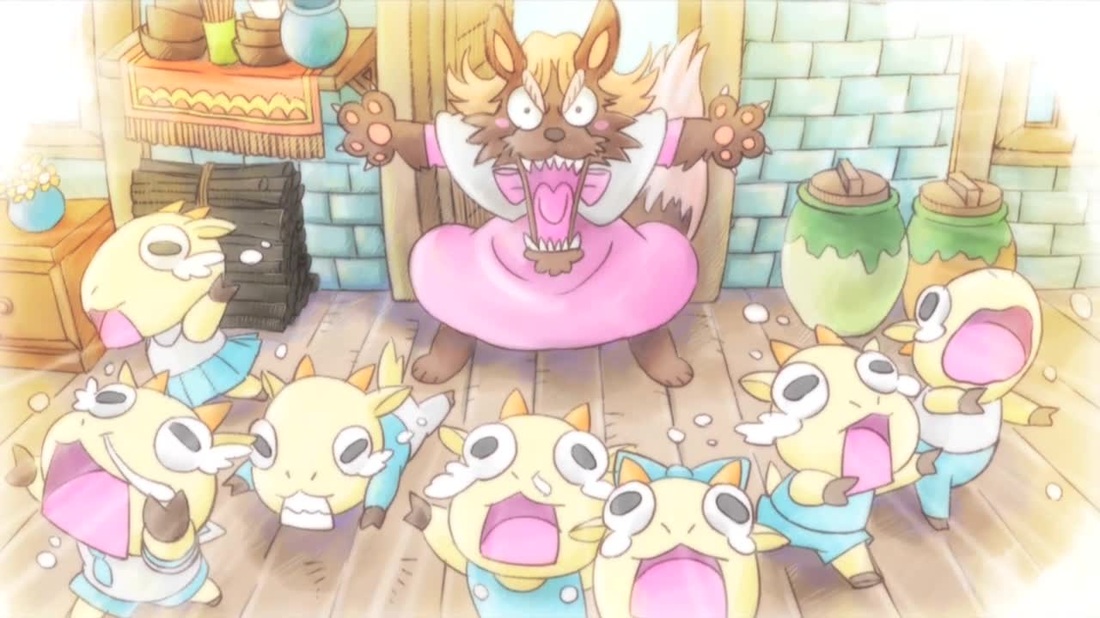 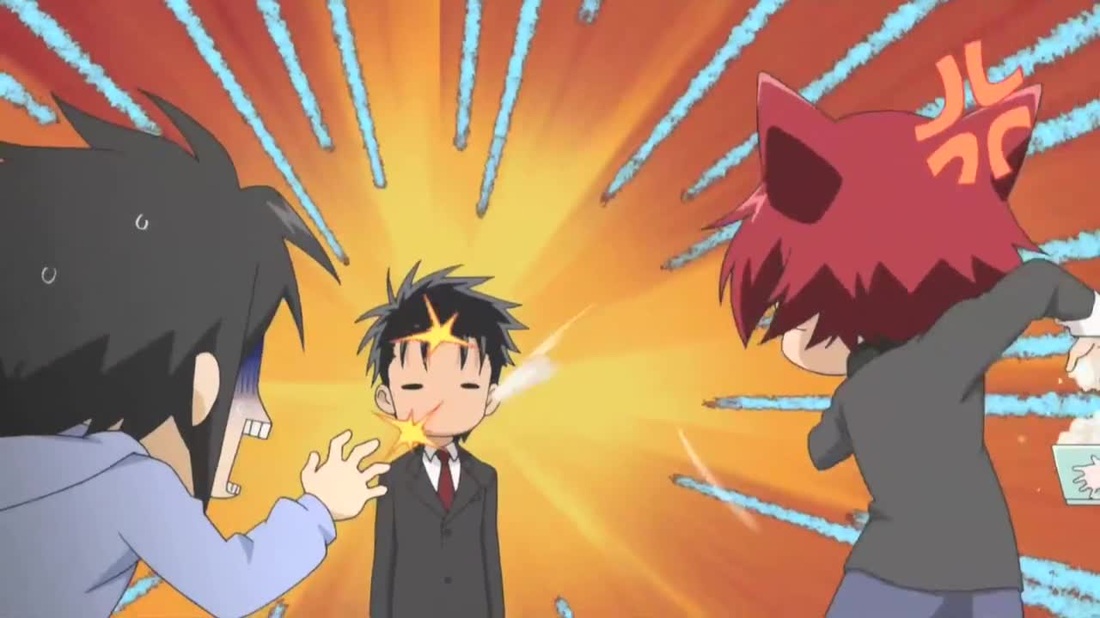