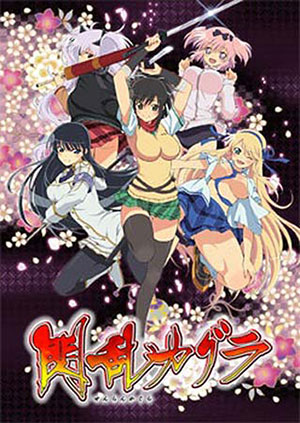 As the season’s series are starting to slimmer down, most of the filler moe crap are filtered out. Though, there have been some weird series this season with some questionable direction. Senran Kagura falls somewhat into this category, and the only expectation I had coming into this was ecchi. And boy, there is a lot of it. Plot, boobs, plot and ninjas are prevalent in this anime (from what I can tell form the first episode) and it is all needless fan service. I’m not a big fan of the genre , so lets see if this can persuade me. 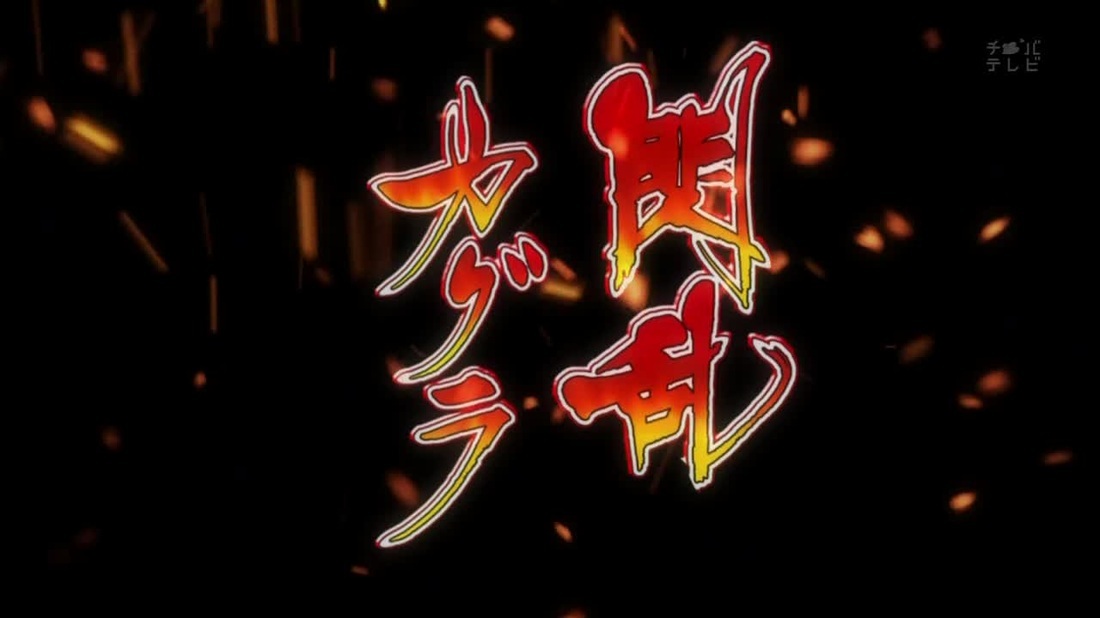 The episode begins with a stylized and fast pace ninja scene in a modern city. We see a girl with large breast jumping around, who is being chased by a group of ninjas. They seem to be searching for a scroll hidden within the girl’s boobs. Some ninja action happens, with shurikens and bombs. One of the ninja’s is able to grab the scroll, but it turns out to be some technique called the ‘molting cicada technique’ and appears that the ninja grabbed her shirt instead. The girl escapes with her bra on and cue opening. We find out that the girl was training during that introduction, by her grandfather. The girl, Asuka is going back to the city of Asakusa where she attends school and meet her fellow endowed ninjas. Ikaruga- the calm and cool character, Katsuragi- the playful and cheery one, Yagyuu- the protective sister type, Hibari- the innocent younger sister type, and also the leader of this group who seems to be a middle age man. We also see some villains in this episode who seem friendly on the outside but are actually evil, because they said so. 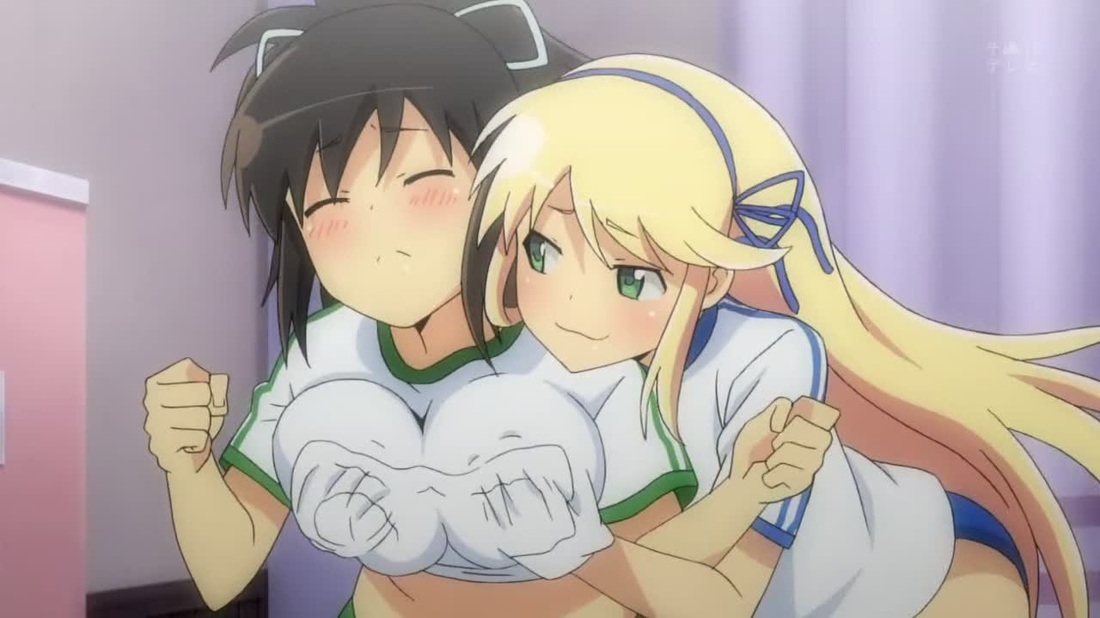 We see the group of young, large breasted ninja high school girls meet in a secret section of the high school. They go through some ariel combat training with each other. The middle age man then gives the young girls a mission to tackle down some delinquents in the city, much to Katsuragi’s disappointment. They go out scouting for the delinquents and Asuka spots someone she met before- on the ship while coming to the city which I did not mention before- Homura. Eventually, Yagyu and Hibari meet some delinquents and launch a signal gun that only ninjas can see. Everyone sees the signal and go to their location, all except for Asuka who is busy helping Homura- who signals a blonde girl with a hidden face. Ikaruga and Katsuragi come and defeat the delinquents, when we suddenly switch to Homura with a knife about to stab Asuka. Who then falls down, which gives Homura an incentive to stop. The defeated delinquents are revived with some dark powers, and the blonde girl form before traps them in some ninja shadow realm. The girls all transform and us their boobilious powers to defeat the revived delinquents, who are actually dolls. Asuka eventually meet up with the girls again, not long after the blonde hair girl touches Hibari, and they discuss her punishment. All meanwhile Homura and the blonde girl discuss the girls and wonder if they were a threat, in which the (assumed) leader remarks that they are not. Also they have big boobs as well. I’m just mentioning the major plot points. 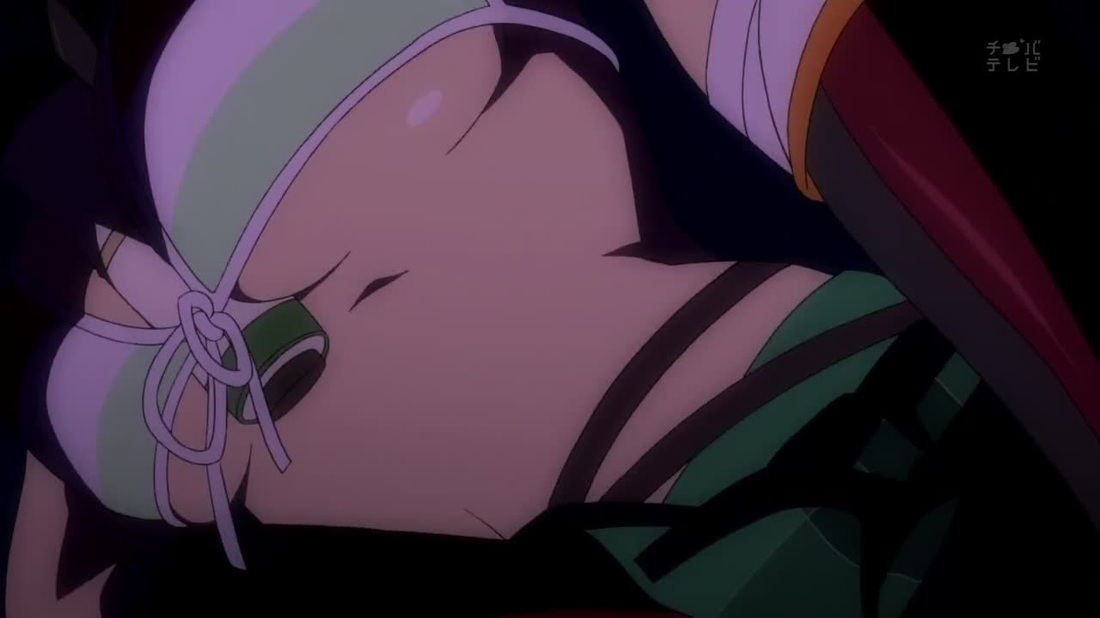 Throughout the episode, most of it is just jiggle, jiggle. The girls seem to have large breasts that seem proportional to their power. That’s what this is, the large the boobs the stronger the girl will be. Regardless, on the plot side of things; the characters aren’t all too interesting and the typical befriend and backstab thing isn’t refreshing to say the least. There may be some stupid things about ninjas in this episode, like ninja powers and a ninja realm that surpasses time and space. Ninjas have superpowers and also the ability to transform, into weirder models of themselves. For instance, Katsuragi’s transformation is just her normal uniform not buttoned up, with some gold boots. And the ninja realm thing sounds kind of stupid as well. The end, which reveals all the villains for the rest of the season, isn’t all too intriguing. So, based on the first episode, the story isn’t anything interesting. As for the premise, ninjas in a modern day setting have been done before. And so has making ninjas have superpowers, and with transformations and large breasts, this is your typical ecchi anime. Though, the action scenes are all done well in regards to being ninjas.

And onto the other ‘plot.’ The unnecessarily large breasts that jiggle more than jelly in an earthquake, and so large that they create their own gravitational field- seriously, that stuff is dangerous. I’m not a big fan of ecchi shows and feel that most of the fan service shown is unneeded, that and the boobs are too large to be realistic- because realistic boobs are more important than realistic logic and powers. Also, panty shots are occasional in this episode. Katsuragi, being the playful girl she is, she likes to play with Asuka’s breasts quite a lot, so I assume this is used to add comedy to the series. The transformations just pretty much shows their personalities, with Ikaruga looking like Kagura form Fairy Tail, Katsuragi wearing a shirt with all the buttons undone, Hibari looking more loli and revealing, and Yagyuu looking like a pirate. I guess the boobs are vital to this anime for some reason, since much social interaction is around them. So this is all the plot and plot I really want to type, anything else would be useless. Now for the animation~~ 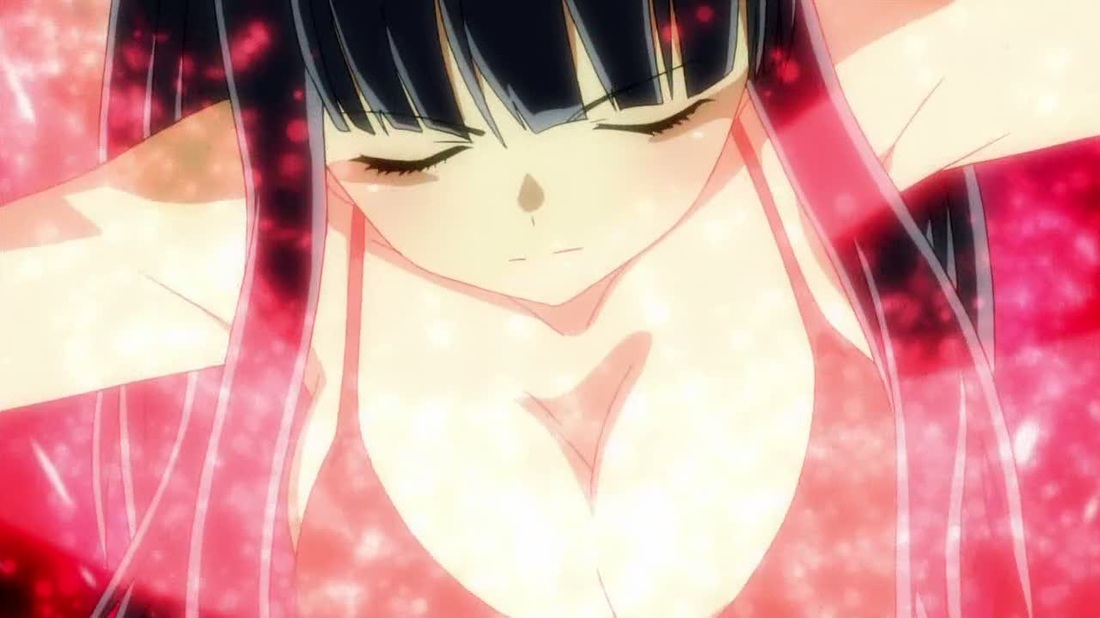 Boob graphics aside for a moment, the animation of the episode is quite good. The movements of the girls (and boobs) are all fluid and have high cinematography. The background too looks nice, especially in the beginning with the bright neon lights of the city. As for the character designs themselves, everyone seems to look like other characters from other shows. I mean, you can look at them and say “she looks like the other girl from the other anime”, but of course there are some tweaks here and there. For some reason, the eyes seem odd to me. Maybe they’re designed weird or are oddly placed apart, but it bothers me a little. Also, Hibari’s eyes are just weird. They have a pink maltase cross in them. All the character’s hair represent the archetype that goes with them; blonde is wild and cheery, pink is innocent and young, silver is elegant and rare, and black is cool and calm. As for the character’s clothing; nothing really keeps their breasts down when the travel anywhere. All the characters have some unique costumes and clothing, of course to distinguish themselves and show their personalities. If I have anything on the topic, which I don’t, I can’t really say anything on the breast animation and designs, but they should be in their own category when recommending this anime to others- like that would happen.

As for the music, the opening and ending are present, and the BGM I didn’t really notice- maybe all that boob action took away from other aspects of the anime. As for the opening, it is a nice song with some English lyrics, oddly enough. The song is nice and does somewhat represent some of the events that occur in the anime, with the action and whatnot. As for the visuals during this segment, there seems to be some spoiler bits with the reveal of the character’s past. I’m not sure why they chose to do that, but it’s revealed. Also, the gang of villains at the end of the episode are all shown in their full frontal glory, so there goes the mystery. The ending is better than the opening, song wise, and it seems that the voice actresses are singing this song- that or just a bunch of various people singing it. The song has a nice beat to it and some nice vocals. As of its visuals, the ninja girls are all playing random instruments as a band, and for some reason there’s a panty shot. Even the ending song is revealing. Regardless it’s a nice ending, but the visuals are quite icky. 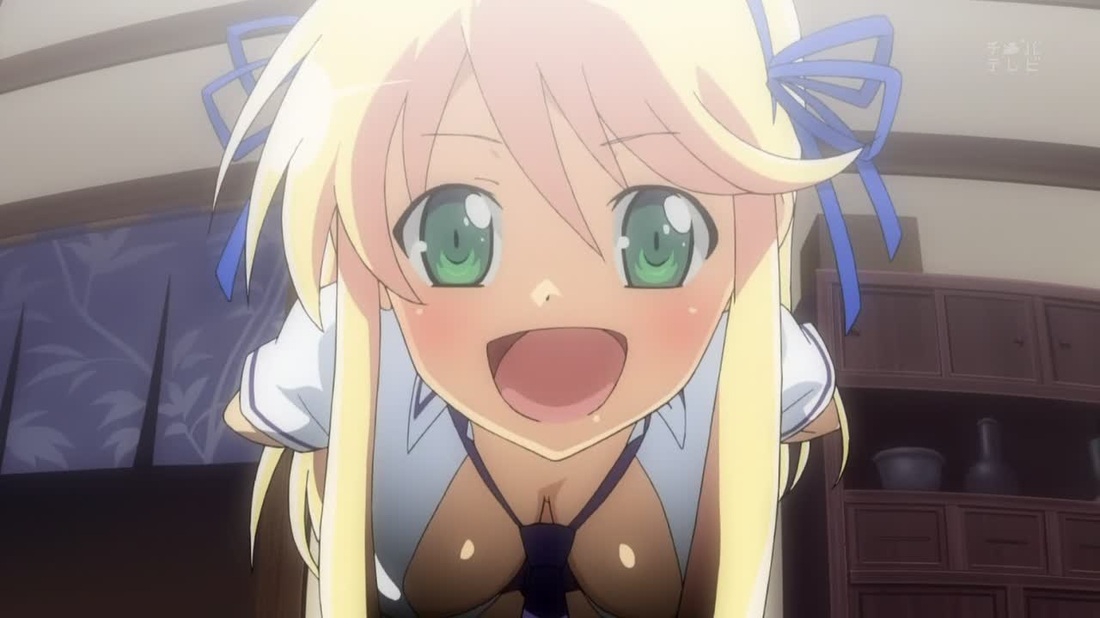 To sum up the first episode, bewbs, boobs and breasts with ninjas, action, and plot. In a more subtle way, the anime is all ecchi and fan service with a side of action and story progression. The characters aren’t too interesting, the lead is the most for the moment, but the animation is well done. So, this anime will be awesome for people who like boobs, fan service, panties and action all at once. If you don’t like it, you won’t like this. I am the latter, and most likely dropping this, unless some godlike thing occurs that will keep me interested before my final decision after the third episode. 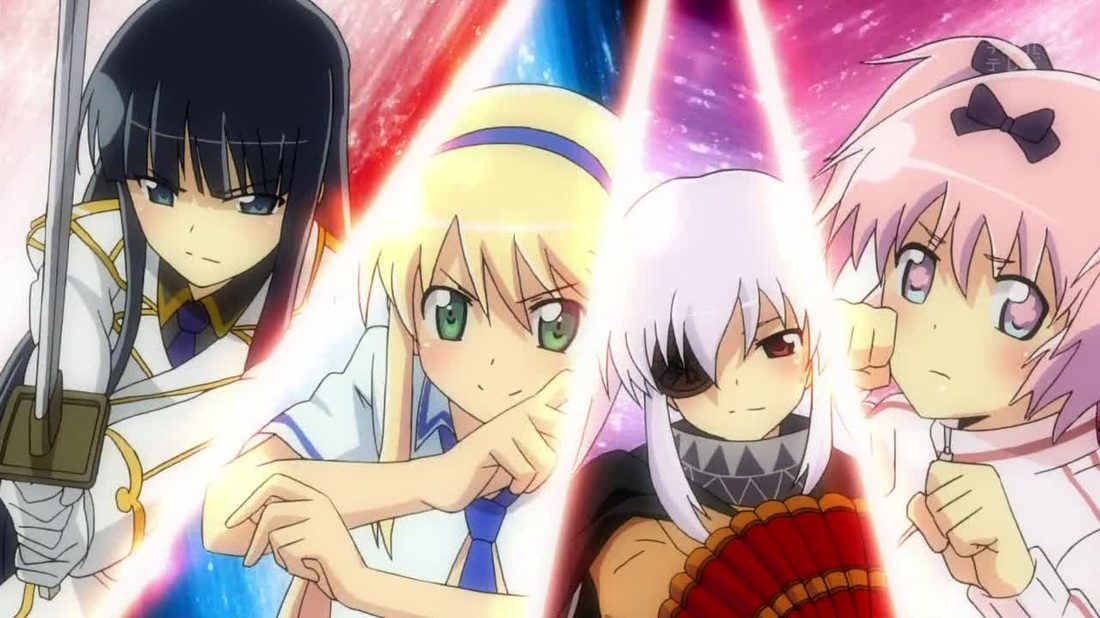 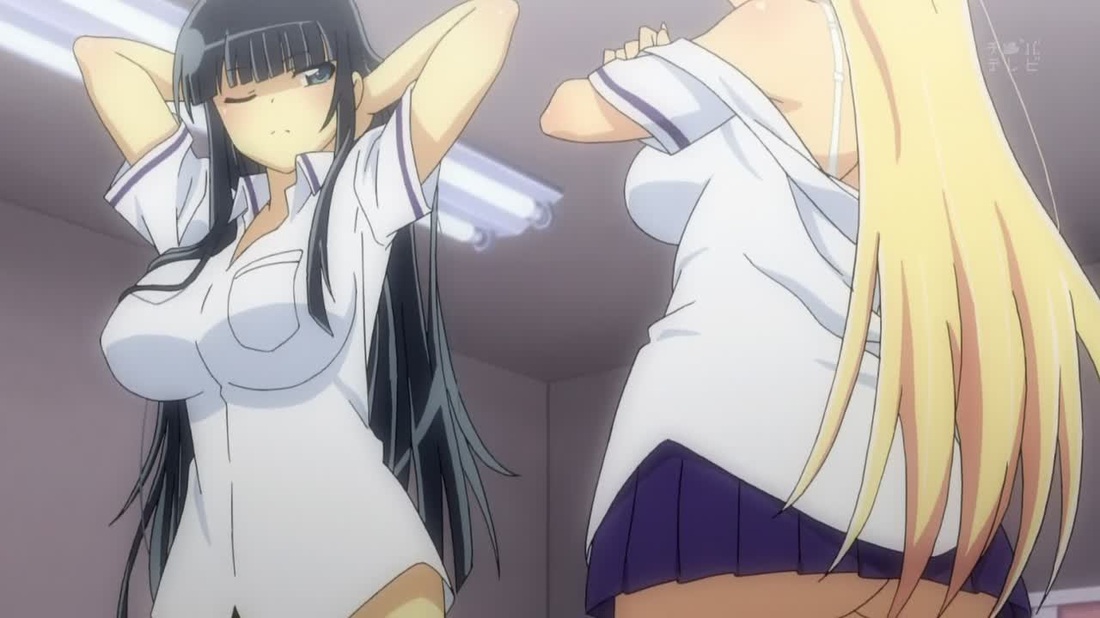 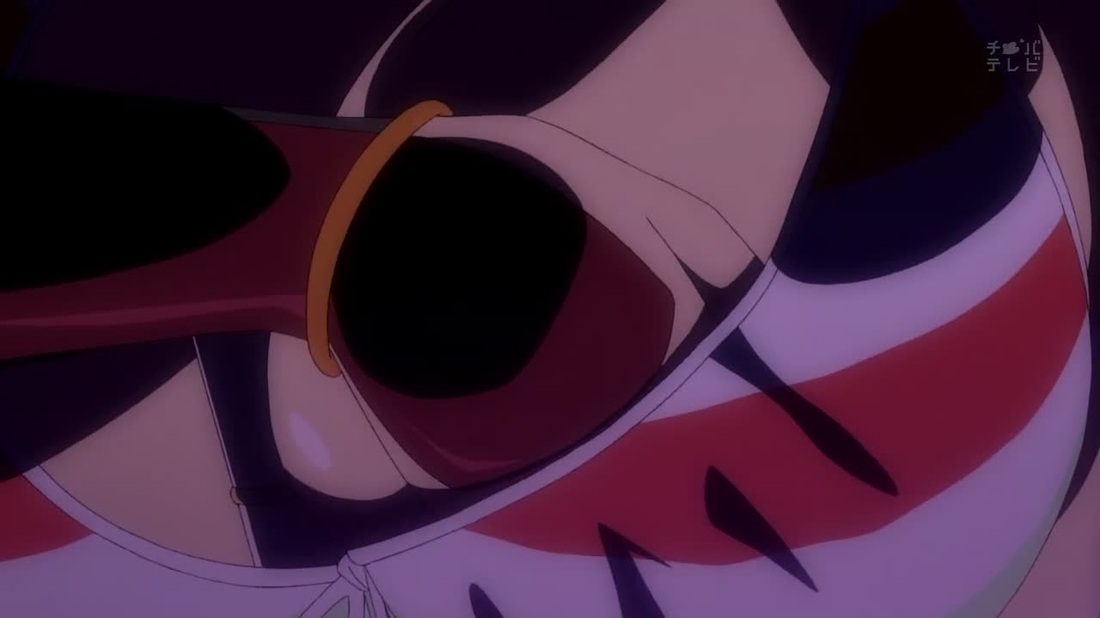 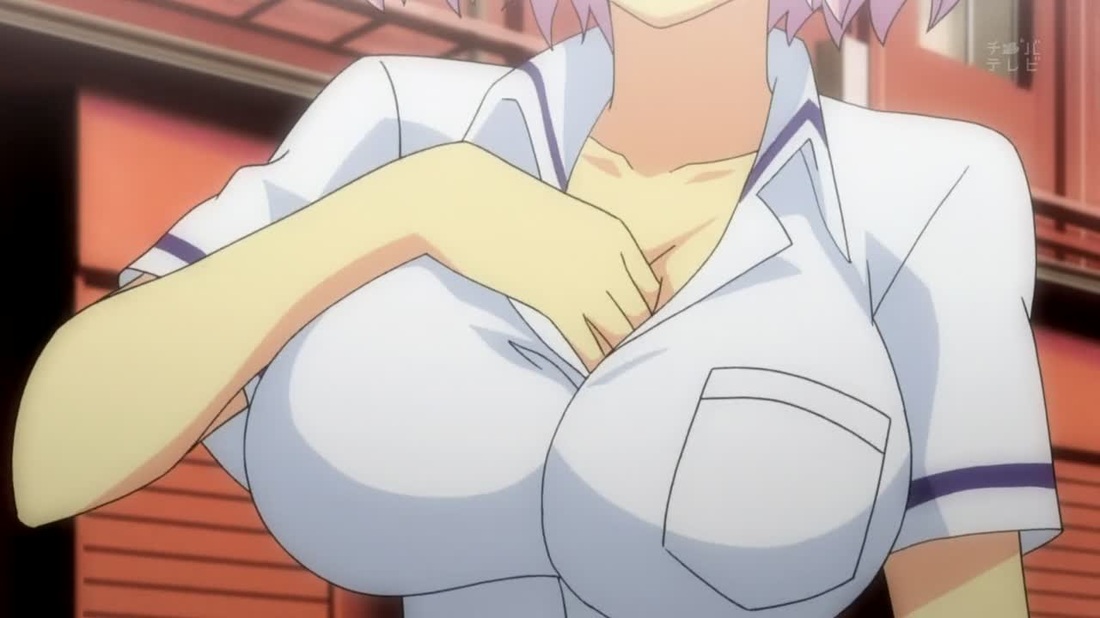