It has been revealed in an issue of an unknown magazine, that a new Sword Art Online special will air on Japanese TV at the end of the year. The special, Sword Art Online Extra Edition will be airing on December 31st as the year closes out. In the afterword of the 13th volume of the Sword Art Online light novel series, author and creator Reki Kawahara has stated that the special will be a recap of both the Aincrad and Fairy Dance arcs, the two arcs that premiered in the anime series. Additionally, he stated that the special will also contain new scenes that didn’t appear in the original anime series. What type of scenes and for how long has not been stated yet. 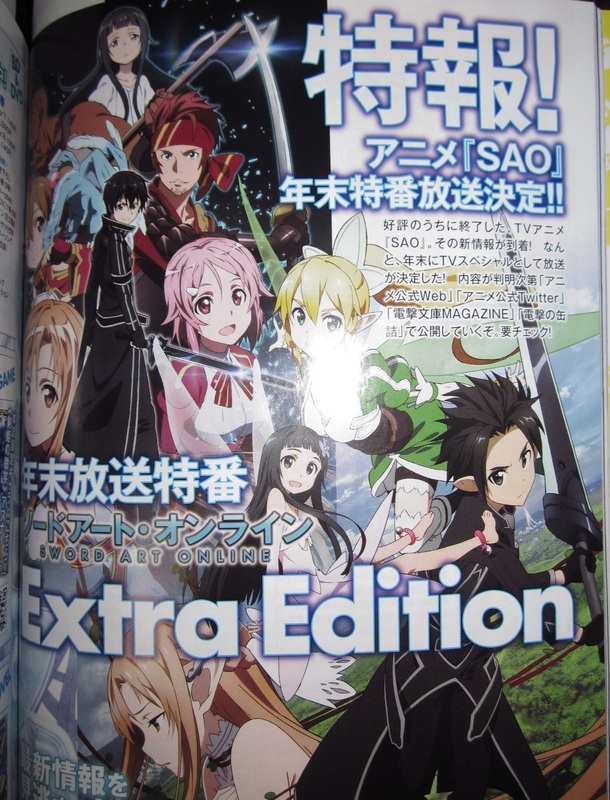 I’d like to do a bit of promotional plugging on this page here. You probably already know this from looking at the book’s wraparound jacket band, but at the end of 2013 the Sword Art Online TV anime series will be getting a TV special. Although the year-end TV special is fundamentally a compilation of the Aincrad and Fairy Dance chapters from the 2012 TV anime series, there will be some new scenes added. It’s been almost a year since we’ve all been able to see Kirito move around in animated form on a TV screen, so please do watch the TV special.

Sword Art Online is a light novel series written by Reki Kawahara, who also is the author of Accel World. The light novel series began in 2009 and has sold millions of copies, topping the charts in 2012. Additionally in 2012, the first anime adaptation was released. Sword Art Online aired in July 2012 and was produced by A-1 Pictures, and received a large reception. Since then, a series of video games, manga spin offs and merchandise of the series were released. If you somehow missed the series, here is a synopsis from Crunchyroll – who streamed the entire anime:

Sword Art Online Extra Edition is set to air on December 31st 2013. It will be a recap of the anime with some new scenes. Whether this is a prelude to the second season of the anime is to be speculated. Until then, enjoy the wait till the end of the year and celebrate in style.