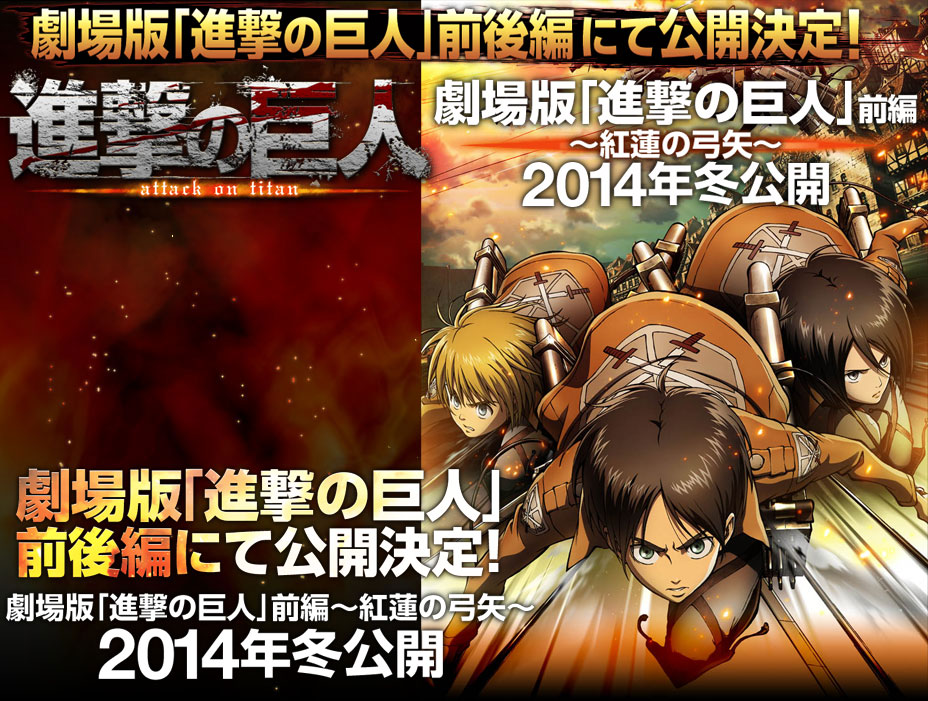 The film will not just be the original series edited into a movie length feature, as there will be some changes. The movie will feature new audio with a 5.1 surround sound remaster, and a complete redubbing with the same cast members. Though this will take time as the first film is scheduled to release in Japan this Winter, and the second film releasing early 2015.

The Shingeki no Kyojin (Attack on Titan) series was created by Hajime Isayama. It first started off as a manga in 2009 and is published in Kodansha’s monthly Bessatsu Shounen Magazine. A prequel light novel adaptation started in 2011, and two spin off manga started serialization in 2012: Shingeki no Kyojin: Before the Fall  and Shingeki! Kyojin Chuugakkou. In April 2013 the series was picked up for an anime adaptation. The anime series was produced by the newly formed Wit Studios, a subsidiary studio under I.G. Port (Production I.G.’s parent company). The series has grown in popularity since the anime’s debut, with the manga selling over 30 million copies as of March this year. Numerous game adaptations of the film were created following the anime, such as the online browser game Attack on Titan: The Wings of Counterattack Online and the Nintendo 3DS title Attack on Titan: The Last Wings of Mankind.

The two films Shingeki no Kyojin Zenpen ~Guren no Yumiya~ and Shingeki no Kyojin Kouhen ~Jiyuu no Tsubasa~ will be a retelling of the original series, and will release in Winter 2014 and early 2015 respectively – where the second season of the anime is most likely to be announced.