It has been revealed that the thirteenth volume of Hajime Isayama’s Attack on Titan (Shingeki no Kyojin) manga will have a total of 2.75 Million copies in its first run. This is a new record for the manga and for publisher Kodansha, where the previous record holder was volume eight of Kazuhiro Kiuchi’s Be-Bop High School, that released 26 years ago in 1987. The volume will release on April 9th. 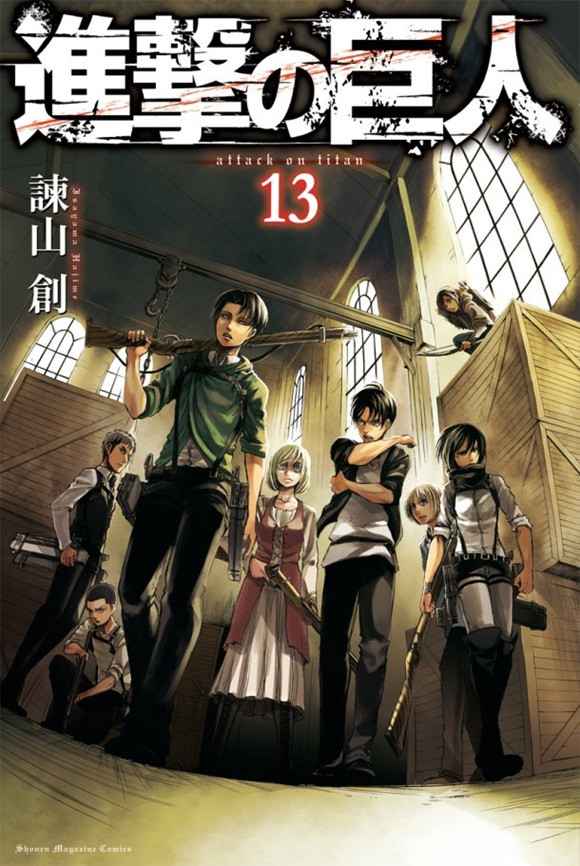 The Shingeki no Kyojin (Attack on Titan) series was created by Hajime Isayama. It first started off as a manga in 2009 and is published in Kodansha’s monthly Bessatsu Shounen Magazine. A prequel light novel adaptation started in 2011, and two spin off manga started serialization in 2012: Shingeki no Kyojin: Before the Fall  and Shingeki! Kyojin Chuugakkou. In April 2013 the series was picked up for an anime adaptation. The anime series was produced by the newly formed Wit Studios, a subsidiary studio under I.G. Port (Production I.G.’s parent company). Numerous game adaptations of the film were created following the anime, such as the online browser game Attack on Titan: The Wings of Counterattack Online and the Nintendo 3DS title Attack on Titan: The Last Wings of Mankind. Two anime films recapping the series, Shingeki no Kyojin Zenpen ~Guren no Yumiya~ and Shingeki no Kyojin Kouhen ~Jiyuu no Tsubasa~, will be releasing in Japan this Winter and early 2015 respectively.

The series is definitely popular both in and outside of Japan. To date, the series has over 36 million copies in circulation, in under 5 years.