In this week’s issue of Shueisha’s Weekly Shonen Jump, it has been announced that Tadatoshi Fujimaki’s popular manga Kuroko’s Basketball (Kuroko no Basuke) will be ending its run next week in the magazine’s 40th issue of the year. 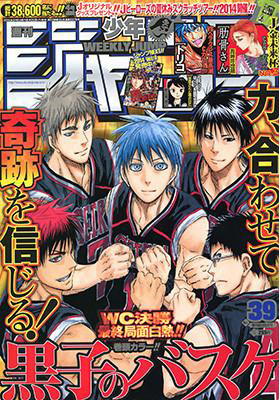 Next week’s issue of Kuroko’s Basketball will contain chapter 276, the final chapter of the series after its 6 year run. The manga already had an anime adaptation with two seasons and a third airing next year.

Kuroko’s Basketball (Kuroko no Basuke) is a manga series by Tadatoshi Fujimaki. The series is a basketball sports series that started serialization in 2008. It is currently published Shueisha’s Weekly Shonen Jump and to date has a total of 28 volumes. There has been an anime adaptation of the series in 2012 and a follow up season that aired late last year. Both seasons were animated by Production I.G. Additionally, two video games based on the series were released, one for the PlayStation Portable and one for the Nintendo 3DS.

Tadatoshi Fujimaki’s Kuroko’s Basketball manga will be ending in next week’s issue of Weekly Shonen Jump on Monday.