The latest issue of Square Enix’s Gangan Joker magazine has revealed the initial cast members of the anime adaptation of Akame ga KILL! Voice Actress Sora Amamiya (Liliana from Log Horizon) will voice the main heroine Akame. The anime is based on Takahiro and Tetsuya Tashiro’s manga that will be produced by White Fox and Toho Animation. 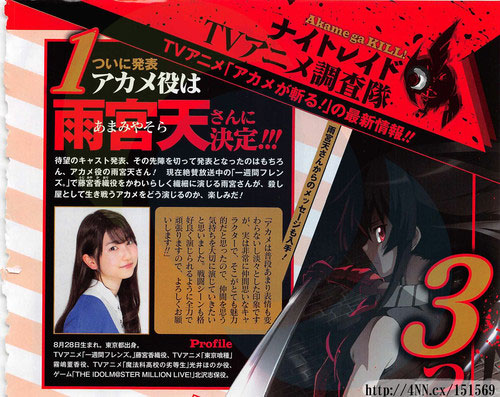 Akame ga KILL! is an original manga written by Takahiro and illustrated by Tetsuya Tashiro. The manga is a dark action fantasy that launched in 2010 and is published in Square Enix’s monthly Gangan Joker magazine. To date there are 9 volumes of the manga complied. The manga has sold relatively well, with the eighth volume selling over 37,000 copies in its first week. Additionally, a prequel manga titled Akame ga Kill! Zero started serialization in October last year. It is once again written by Takahiro, but features Kei Toru as the artist. 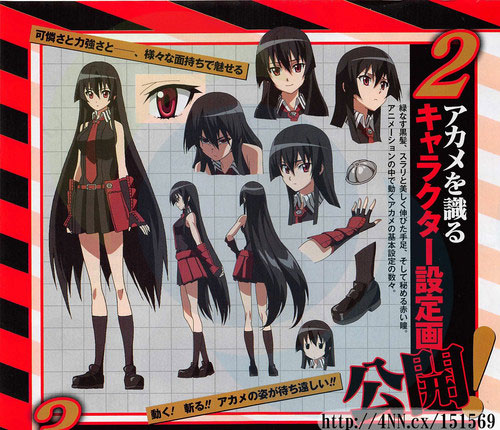 Tatsumi is a fighter who just got robbed by a pretty girl, but his luck seems to be looking up, as another pretty girl has taken him in. What he doesn’t know is that this girl is about to be visited by a family of assassins (including the girl who robbed him) and they might be the good guys, and be recruiting…

Additional information about the Akame ga KILL! anime will be released in the upcoming weeks. The anime is expected to air later this year.

You can visit the anime’s official site here: http://akame.tv/