Update: Sui Ishida has revealed on Twitter that the anime will be 12 episodes.

It has been supposedly leaked that the upcoming second season of the anime adaptation of Sui Ishida’s Tokyo Ghoul will be a 2 cour series lasting 24 episodes. The reveal was made on the anime’s official chinese site, much like how it leaked that a second season of the anime was in production. Additionally, the band performing Tokyo Ghoul √A‘s Ending theme was officially revealed. 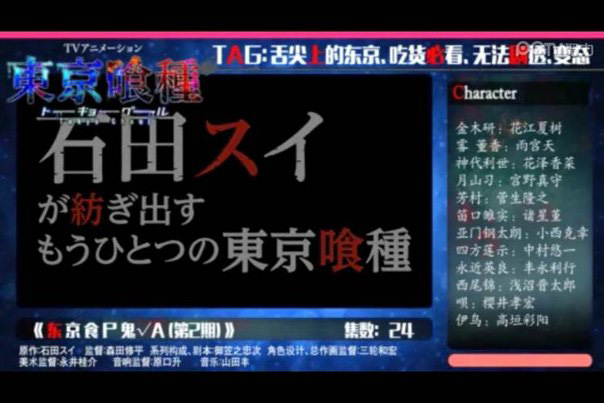 The Chinese site for Tokyo Ghoul has supposedly leaked another vital piece of information that the upcoming series will be 24 episodes long. At the time of this article, there is no traces of the 24 episode announcement on the website or any official confirmation since, so be weary of this leak despite the site leaking correct information in the past. If the series were to be 24 episodes long then Tokyo Ghoul √A will span two seasons, the Winter 2014/2015 anime season and the Spring 2015 season, starting from January and ending in June.

The anime’s Ending theme song will be performed by amazarashi, which was revealed in the upcoming issue of Shueisha’s Young Jump magazine. amazarashi is a mysterious band that have not revealed any of the member’s appearances to the public. The band was won a few awards, including the Excellence Award at the 14th Japan Media Arts Festival and for an award at the 2011 Annecy International Animated Film Festival. 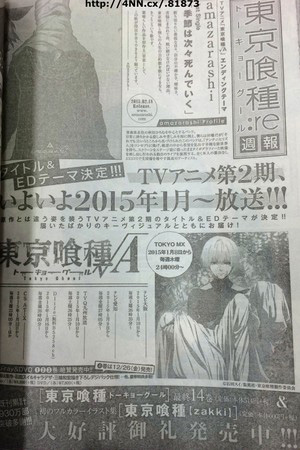 The upcoming second season will be based on a new original story written by Ishida, rather than adapting the remainder of his original manga. The series will once again be animated by Studio Pierrot (Naruto Shippuden, Bleach) and the majority of the cast and staff will return to reprise their roles. The second season itself will be airing from January 8 next year on Tokyo MX, before airing on TV Osaka, TV Aichi, TVQ, Dlife and ATX-1 in the subsequent days. There will also be an advanced screening session of the first episode on January 4 at the Toho Cinemas in Nihonbashi. More information about ticket purchases will be revealed soon.

Whether the series will have a total of 24 episodes of new original content has yet to be confirmed. Tokyo Ghoul √A will be airing from January 8 next year during the Winter 2014/2015 anime season on Tokyo MX. An advanced screening of the first episode will be held at the Toho Cinemas in Nihonbashi on January 4. More information will follow soon.