The official website of the anime adaptation of Karino Takatsu’s Working!! (Wagnaria!!) manga has released the first visual for the upcoming third season of the anime, Working!!! The site also reconfirms that the anime will be airing from July 2015. 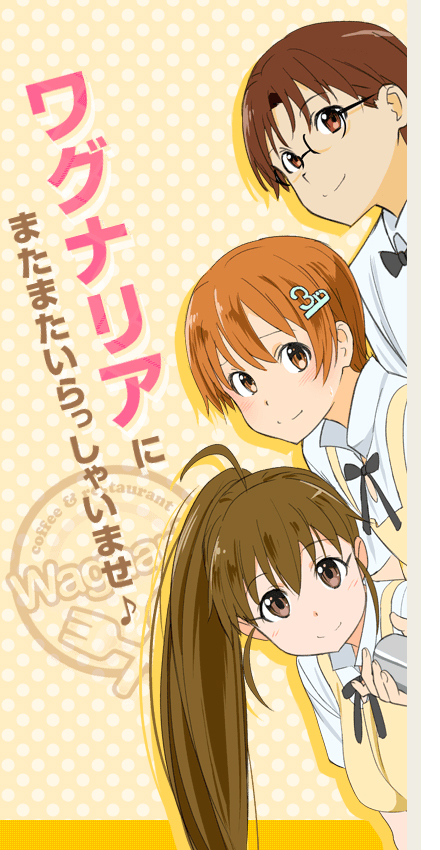 The anime’s site also reveals that there will be a Blu-ray boxset of the first Working!! anime. Early adopters will be able to receive additional content, such as a special Digipack designed by the anime’s character designer Shingo Adachi, and a special disc containing footage from the 2011 Summer and Spring Working!! events. The boxset will release on April 22 and sell for ¥27,000 ($270.00 USD) with tax. There will also be an album of all the anime’s character songs that will go on sale on June 28 titled WORKING!! Character Song☆Full Course, and will cost ¥8,000 ($80.00 USD) with tax.

Working!! (Wagnaria!!) is a 4koma manga written and illustrated by Karino Takatsu. The series began serialization in 2005 in Square Enix’s Young Gangan magazine, where the manga will end in the upcoming volume. To date the series has a total of 12 volumes released with the 13th and final volume being released on December 25th. The series received an anime adaptation in 2010 from A-1 Pictures (Sword Art Online, Fairy Tail) that is directed by Yoshimasa Hiraike (AKB0048, Gugure! Kokkuri-san). The anime’s second season, Working’!!, was produced in 2011 by the same studio, but was directed by Atsushi Ootsuki (To LOVE-Ru, Ladies versus Butlers!).

Working!!! will be airing from July next year during the Summer 2015 anime season. Further information about the anime will be revealed at the Working!! & ServicexService Natsu Matsuri event on the 25th.