In the recent issue of Bessatsu’s Shonen Magazine, the release date for the first upcoming animated recap of Attack on Titan was revealed. The first film, Shingeki no Kyojin Zenpen ~Guren no Yumiya~ (Attack on Titan Part I: Crimson Bow and Arrow) will be out in Japan at the Shinjuku Wald 9 and Umeda Burg 7 theatres on November 22. 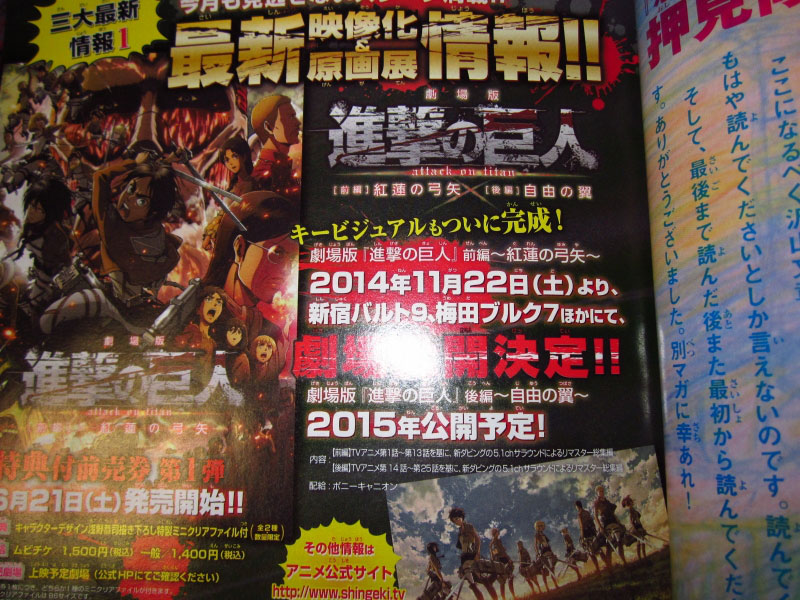 The first film will cover the first 13 episodes of the anime. The second film, Shingeki no Kyojin Kouhen ~Jiyuu no Tsubasa~ (Attack on Titan Part II: Wings of Freedom), will cover the last 12 episodes and is expected to release in 2015. The films will not just be the original series edited into a movie length feature, as there will be some changes. The movie will feature new audio with a 5.1 surround sound remaster, and a complete redubbing with the same cast members.

The Shingeki no Kyojin (Attack on Titan) series was created by Hajime Isayama. It started off as a manga in 2009 and is published in Kodansha’s monthly Bessatsu Shounen Magazine. To date there has been 13 compiled volumes of the manga. A prequel light novel adaptation started in 2011, and two spin-off manga started serialization in 2012: Shingeki no Kyojin: Before the Fall and Shingeki! Kyojin Chuugakkou. In April 2013 the series was picked up for an anime adaptation. The anime series was produced by the newly formed Wit Studios. The series has grown in popularity since the anime’s debut, with the manga selling over 36 million copies as of April this year. Numerous game adaptations of the film were created following the anime, such as an online browser game and the Nintendo 3DS title Attack on Titan: The Last Wings of Mankind.

Shingeki no Kyojin Zenpen ~Guren no Yumiya~ will release in Japan at Shinjuku Wald 9 and Umeda Burg 7 on November 22nd. It will recap the first 13 episodes of the anime in higher quality. Tickets will go on sale from June 21st. The second film, Shingeki no Kyojin Kouhen ~Jiyuu no Tsubasa~ has a planned date of 2015.