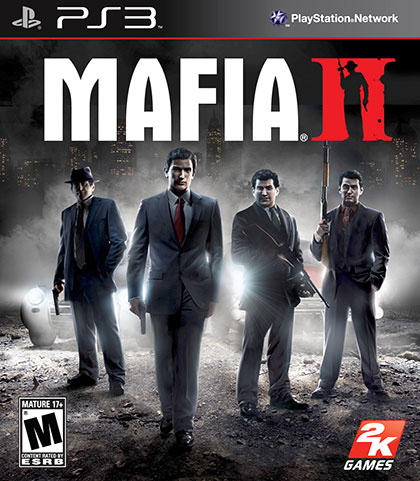 MAFIA fans had a long wait, a solid eight years until a sequel was formed for a legendary and amazing game. MAFIA II has finally been released out to the public and fans of the original game can play a game that lives up to its older big brother as MAFIA 2 delivers absolutely astounding game play and a plot line so smartly and intricately designed it could run as a “Godfather” sequel. MAFIA II is very heavily story driven and focuses specifically on the point of creating a single player experience and not wasting time on unnecessary game play elements where all that matters is that a rock solid single player campaign accompanied with a beautiful yet brutal plotline is delivered to the player. MAFIA II has successfully advanced and even built upon new concepts from the original MAFIA such as exceptionally excellent voice acting, dazzling graphics, compelling and engrossing missions, a particularly engaging plotline as well as a beautifully engineered general game play world.

Numerous games are attacked by critics due to horrible and embarrassing voice acting however MAFIA II’s voice acting is just amazing. The sense of reality of the MAFIA syndicate is delivered and executed perfectly during cut scenes and the voice acting really does draw you into the game and feel that the characters have a sense of life and personality behind them, and they’re not just engineered graphics. The different characters in MAFIA II all feel and talk differently and this can be thanked due to the absolutely brilliant voice acting. The classic Italian accent can be heard throughout the game and actually makes you feel at home as you are doing jobs around Little Italy. 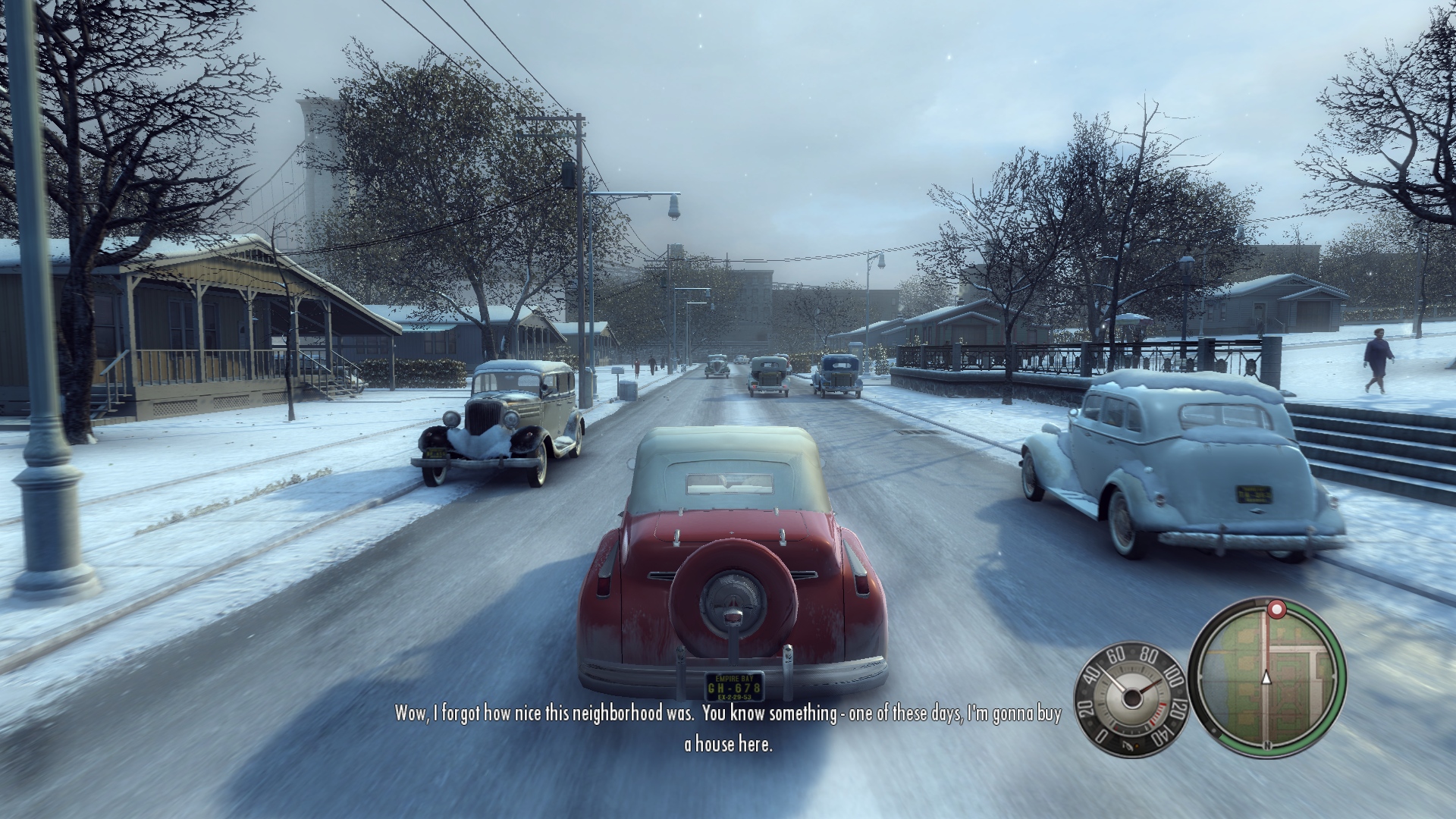 The graphical capabilities of MAFIA II have been heavily underrated from numerous critics, since the graphics are most certainly acceptable and the developers really should have been commended more than the praise they have received in forms of the graphical elements of MAFIA II. The graphics during game play and cut scenes are very nice and acceptable however it should be noted that frame rate does drop when you are inside houses and apartments yet in the outside world, the frame rate does not suffer at all. Effects of all kinds are included in MAFIA II such as ice forming on your car as well as a very realistic car damaging system, every bump or crash you suffer will be very clearly shown in your car ranging from small dents to complete total loss.

The missions in MAFIA II are just amazing, and contribute to the sense of MAFIA II being so focused on the story side. The missions are of all kinds ranging from completing a hit on an enemy of “The Family” or simply collecting “collection” money and every mission has a meaning behind it and follows closely to the order of the plot line. MAFIA II has a large amount of missions in the storyline and each mission has been made sure it does not become tedious or a drag to the player. Missions are fun yet contribute heavy to the story therefore making you feel like every mission or action you do makes a difference. Throughout the progression of the story, missions will start of be getting more and more dangerous as you make your way through the ranks of “The Family”. Fans of Italian MAFIA films and novels will certainly find MAFIA II’s missions satisfying and solid as they are of the perfect combination of length and quality.

Developers have clearly stated MAFIA II’s main selling point is the solid and intricate plot line which has been extensively developed throughout the time of the game during the development life cycle. Little references to other MAFIA-related media have been made such as from other movies or novels and the plot line is actually unpredictable and can swirl out of control at any time as the main character of Vito is impulsive and violent. The plot line is just beautifully crafted and features the poor Italian boy joining the ranks of the MAFIA in search for fame and glory. 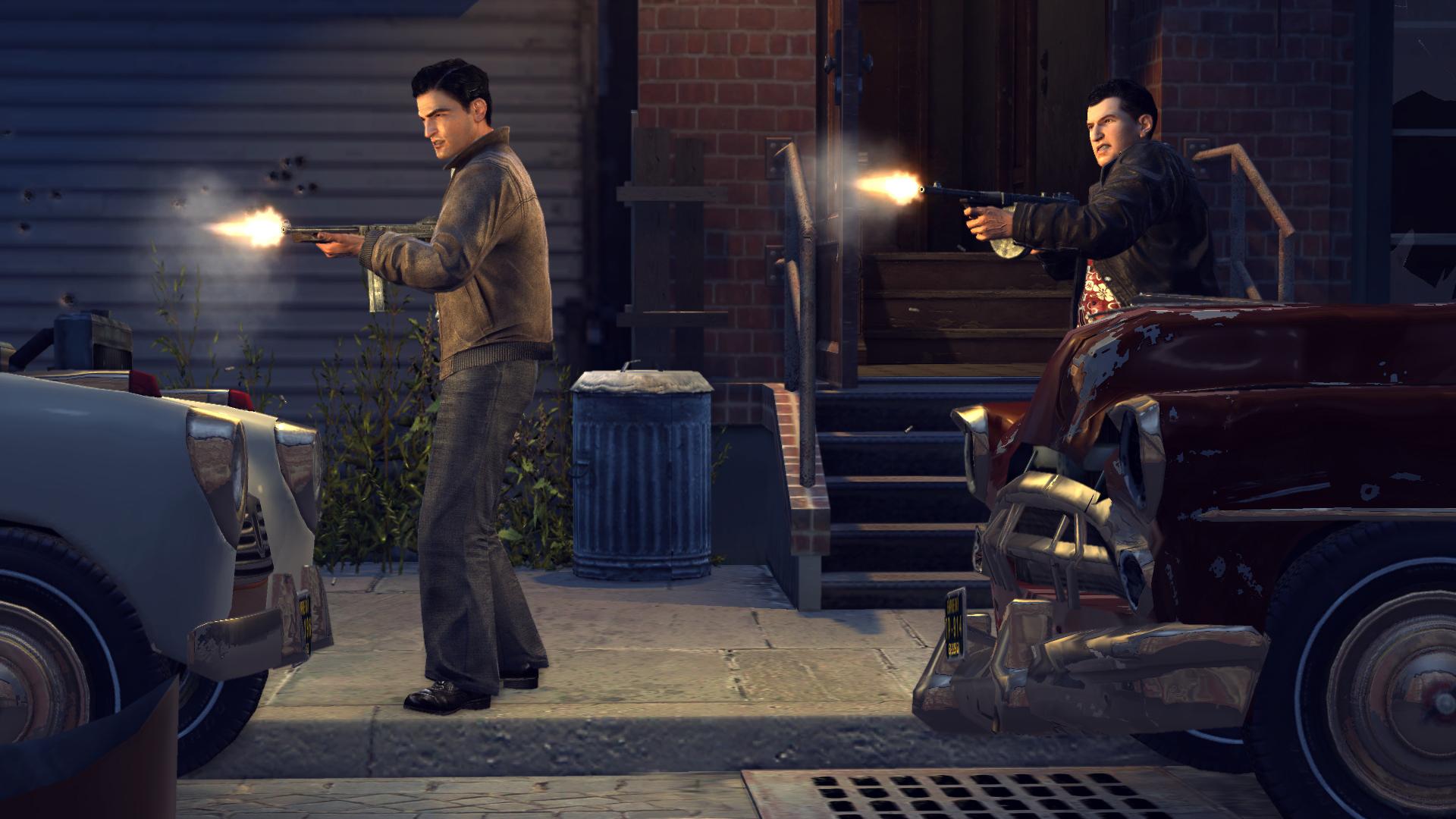 The general game play of MAFIA II is excellent as well however one point which has been made from critics is that the city of Empire Bay is not fully used. Such a vibrant and large city is only used during missions and when you explore however apart from the missions the city is never really applied. Small stores do drag you to the city occasionally to places like “Car Shops” however once again the city is not used to its full potential, and the developers should have added more places to visit. However, this can also be seen as a deliberate and smart move from the developers who were very eager to focus the game on the story and not other small things. The choice was left up to the developers, and the choice of liking or disliking such a story driven game is up to the player.

Cars are the main form of transportation in MAFIA II and they handle really well and realistically as well. The environment will change the way vehicles handle such as driving on icy roads, grip and traction will greatly suffer. Cars also need to be refuelled once the tank is empty to emphasize the reality of life in Empire Bay. These small yet interesting little elements of the game play all add up and make a big difference to the game play in general and the driving has been perfected as handing characteristics are responsive and easy to use.

Shooting also plays a prominent role in MAFIA II’s game play as many of the missions require you to handle fire arms ranging from small snub nosed revolvers to heavy German machine guns from the WWII era. The shooting is solid and with every round fired, you feel the intensity and power behind these weapons. One quick note is that the crosshair in the game should have been slightly modified with a dot in the centre to make pulling off headshots easier. Weapons are fun to fire and handle well with a large assortment to choose from. 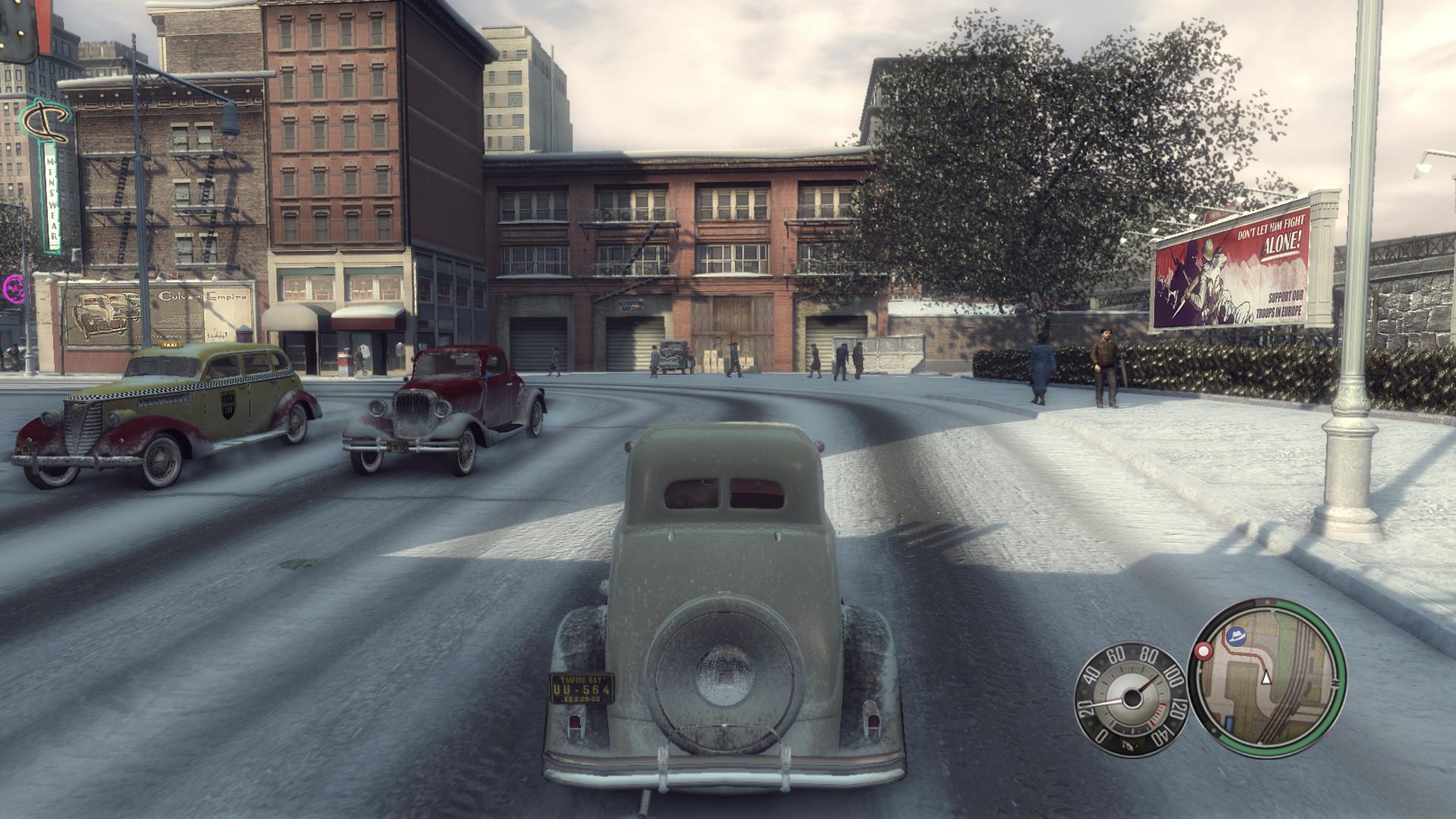 Overall, MAFIA II is an absolutely brilliant game that has all kinds of great and outstanding features and should be bought by fan that is need of an intense action game which has a very heavy sense of story infused into it. Just a brilliant game to buy.