It is now Summer and what better way to celebrate the hot temperatures and shining sun than visiting the beach? Other than keeping cool and going for a swim is looking at the gorgeous girls in swimsuits. In that case, what about seeing your favourite female anime characters in swimsuits?

So who are the most attractive, most desirable and most sizzling female anime characters? 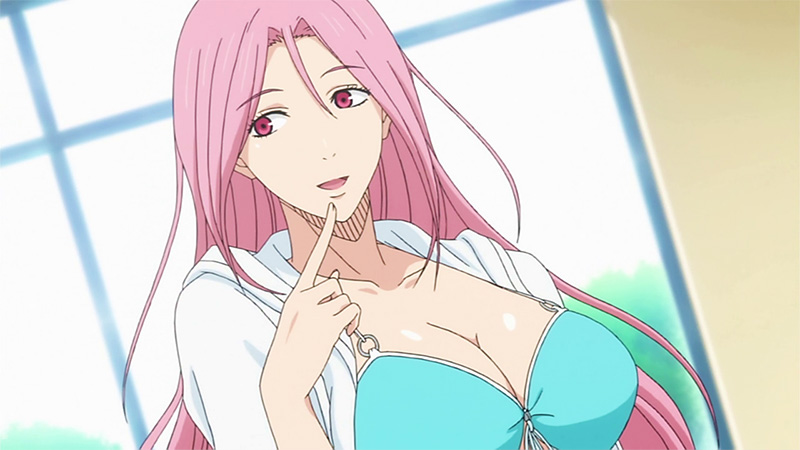 The ex-manager of the basketball team at Teikou, and now serving as Touou’s manager. She’s in fact Aomine’s childhood friend and enters Touou together with him because she can’t leave him alone. She is actually in love with Kuroko and considers herself to be Kuroko’s girlfriend. Her reasoning for loving Kuroko is that he once gave her a coupon for an extra ice cream, although he only did this because he was already full. As noted by Riko her data collection abilities are elite and she resembles a spy while observing the game. She doesn’t only have the past data, but she can also predict the opponent’s growth, and thus making her a great strategist. Apparently she’s also bad at cooking. 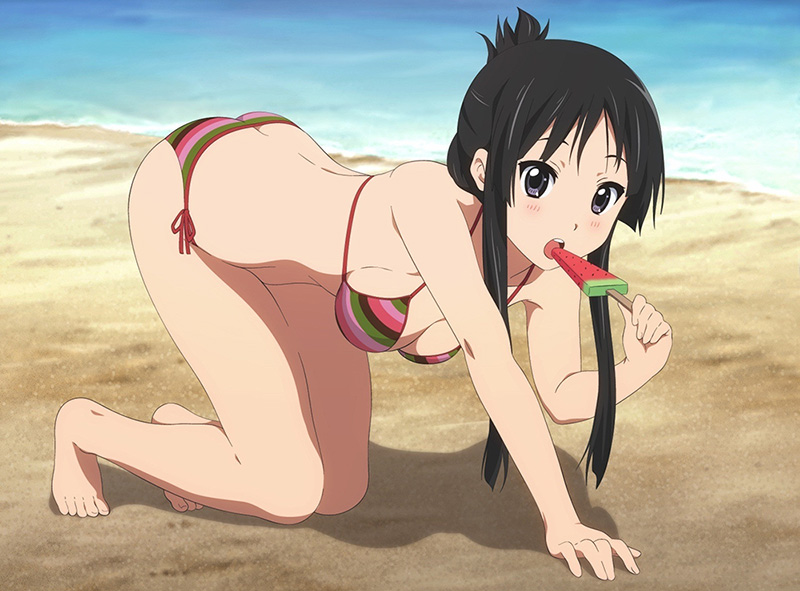 Mio is a shy girl who is in the light music club. She plays a left-handed, 3-Color Sunburst Fender Jazz Bass with a tortoiseshell pickguard. While she originally intended to join the literary club, she was forced into the light music club by her childhood friend and the club’s president/drummer, Ritsu. She gets excellent grades in school and is often mature and strict especially where Ritsu is involved; her weakness is the macabre and horrific, and she is often incapacitated with fear when stories involving ghosts, blood, injuries, haunted houses, barnacles or other disturbing topics come up. She also has a fear of being in the spotlight and gets embarrassed easily, and is often subject to teasing from Ritsu and Sawako, their club adviser and eventual third-year homeroom teacher. 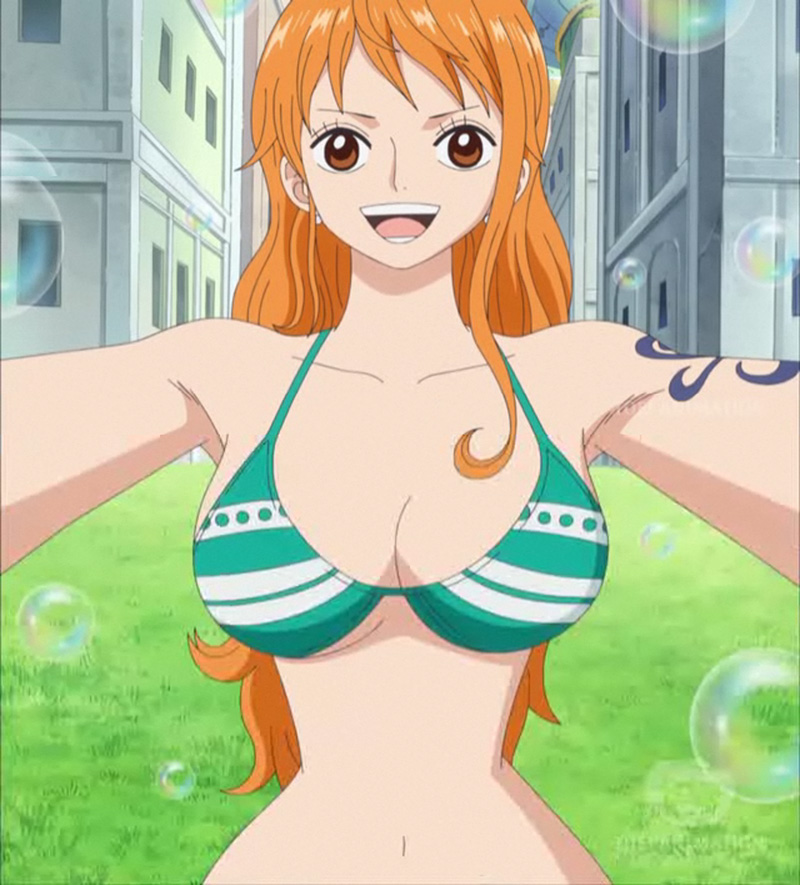 She is the first member of the Straw Hat Pirates to appear (in the anime), but the third to align herself with the crew, and the fifth to actually join. Possibly one of the best (or even the best) navigators currently sailing the Grand Line, she has the ability to recognize and analyze even the slightest changes in the weather through sheer intuition, thus saving the ship and the crew from the very unstable Grand Line weather on multiple occasions. She often comically beats or hits her other crewmates for their nonsense, which occurs quite often. Robin is actually the only person Nami doesn’t try to boss, and she refered to her as the only person who understands her, though in a comical fashion. She is very manipulative as well and can even turn an entire conversation in her favor when necessary, often putting on disguses and tricking the enemy. Acting as the “mother” of the crew, Nami doesn’t understand or approve of the boys’ often macho attitudes and principles. 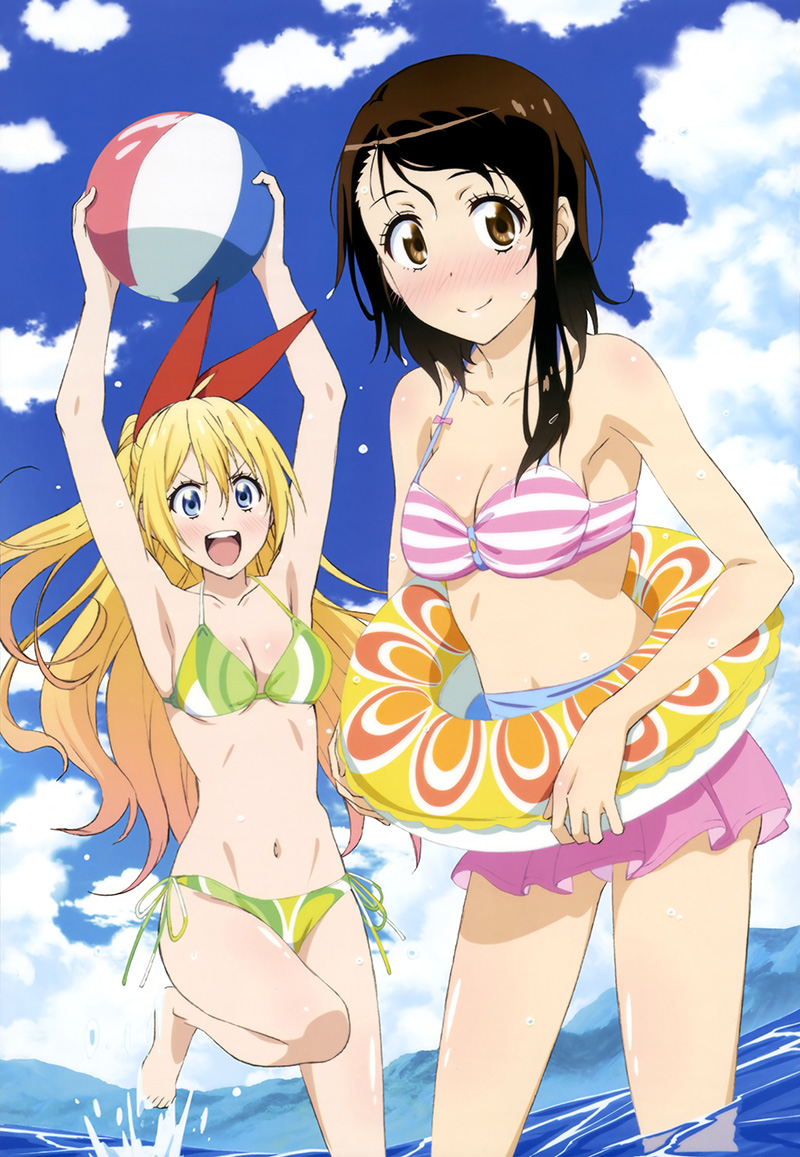 Onodera is discreet, innocent, and slightly timid. She is very kind, she takes care of Ichijou when he is wounded or ill. Generally, she opts to think carefully before acting, as seen when she stalls her confession to Ichijou in consideration that he may have feelings for Kirisaki. In confrontation with Ichijou, Onodera displays inconfidence, initially needing encouragement from Miyamoto to attempt confessing her love. 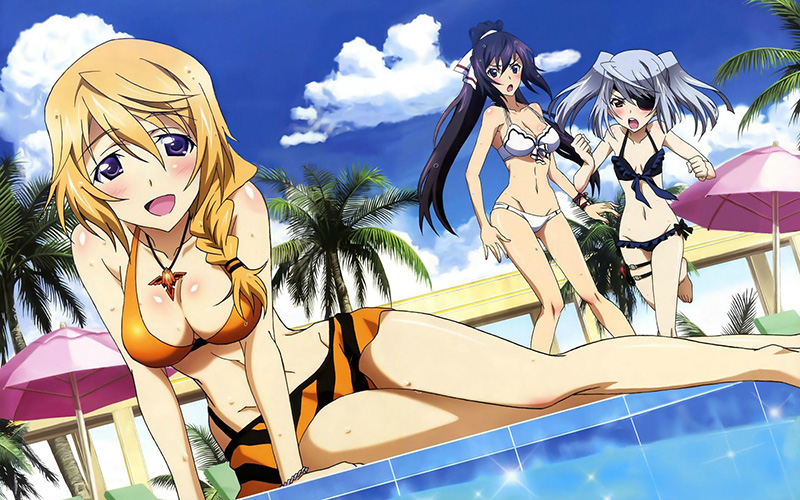 Charlotte is a first year student at the IS academy and is the IS cadet representative from France. Charlotte was originally introduced in the series as “Charles”, the second male IS pilot student that was transferred into Ichika’s class but was actually sent to the academy to spy on Ichika. Charlotte is put in a room with Ichika, but he soon discovers her true gender. After hearing her sad story he decides to help her and then she falls in love with him

Miki has rarely had to work hard for anything. It is because of this that she always approaches tasks with a very laid back attitude. She manages good grades with minimal effort, and was born with good-looks that belie her age. She even receives around 20 confessions of love per day from boys. She’s grown up in a very laissez-faire family, who had no problems with her becoming an idol. While she doesn’t really have cruel intentions, she believes like everything else, she can make her way to becoming top idol easily.

Honoka is the main character who is a second-year student at Otonokizaka Academy. Her family works in a wagashi shop named Homura, though she herself hates red bean paste. When Otonokizaka Academy is planned to be shut down due to lack of applicants, Honoka becomes determined to save it by starting up a school idol group.

As hobbies, she enjoys swimming and sticker collecting. Honoka also has a knack for finding loose change on the ground. 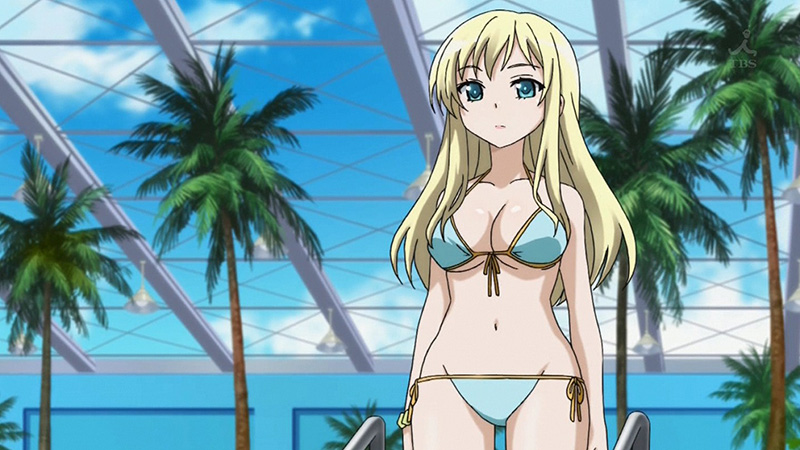 he wealthy blonde daughter of the school’s headteacher, Sena shows a dislike of all things “ordinary.” She is both attractive and academically successful, but her resulting arrogance leads her to be disliked by her female peers. Their admiration eludes her, much as she desires it; she treats her male classmates only as servants to be used, although many of them would like to be her boyfriend. Nonetheless, she holds Kodaka to a higher standard. Kodaka concludes that she is the weirdest member of the club, as she is able to warrant weird and disgusted looks not only from Yozora and Kobato, but also from Yukimura and Rika.

She enjoys playing video games—including dating sims and eroge—partially because they allow her to make female (if virtual) friends. 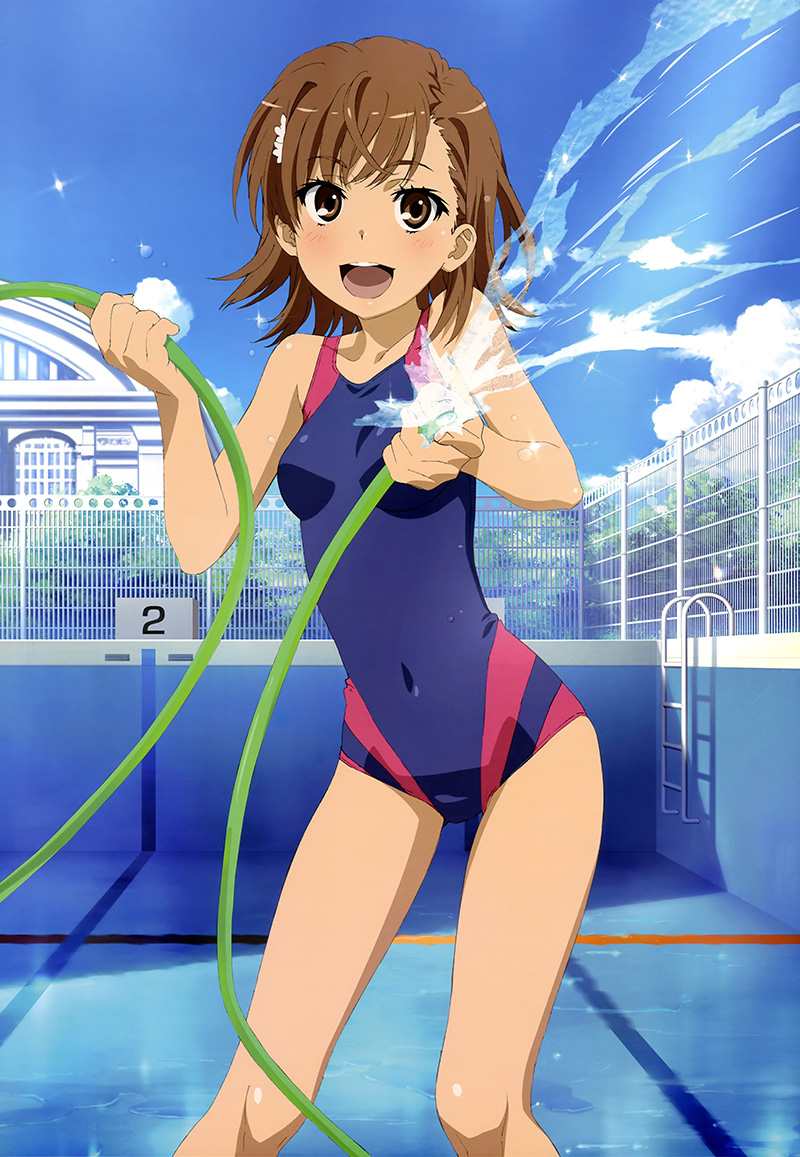 Mikoto Misaka is one of the series’ main heroines in Toaru Majutsu no Index series and the protagonist of her side story, Toaru Kagaku no Railgun. A psychic user of Academy City, her powers are ranked Level 5, the highest rank for the most powerful psychic users, and she ranks as third-strongest out of the seven people who hold this rank in Academy City.

She attends Tokiwadai Middle School, a famous girls’ school for the rich and elite psychics and one of the five elite schools of Academy City. To most people, she is considered a proper lady, but in reality, she has a short-tempered, prideful, and improper attitude with some tomboyish tendencies and insecurities, a fact few other characters know. She is fond of cute, childish things, such as flowery pajamas and Gekota, the popular frog mascot franchise. She has a strong sense of morals and hates injustice, contrary to what she claims. 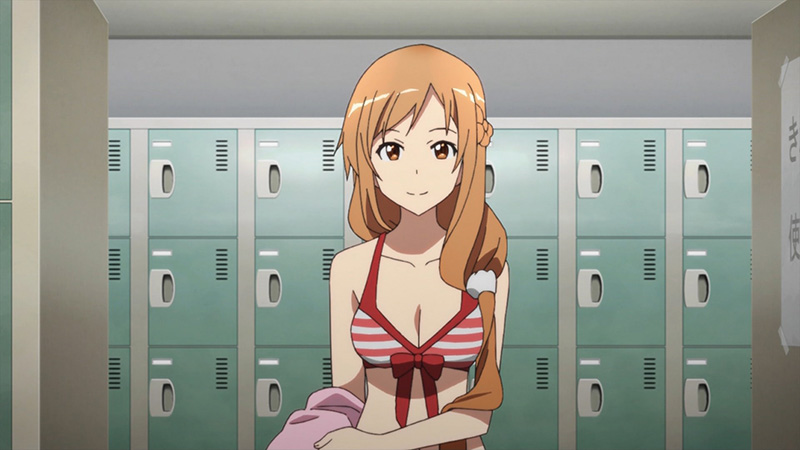 Asuna is a friend of Kirito and is a sub-leader of the guild Knights of the Blood (KoB), a medium-sized guild of about thirty players, also called the strongest guild in Aincrad. Being one of the few girls that are in SAO, and even more so that she’s extremely pretty, she receives many invitations and proposals. She is a skilled player earning the title “Flash” for her extraordinary sword skill that is lightning fast. Her game alias is the same as her real world name.

So who are your favourite female anime characters to see in a swimsuit?