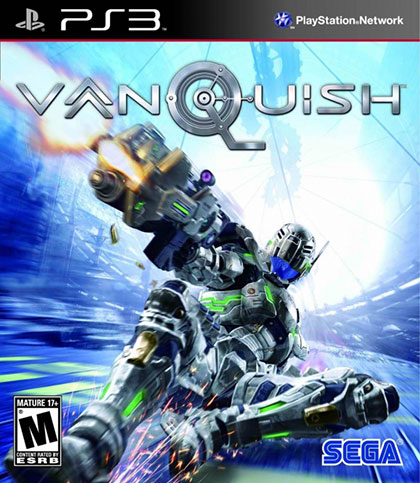 Shooters have mostly been about that fast paced action, shooting anyone that gets in your way. Modern Warfare 2 had pretty hectic and fast gameplay but Vanquish does ten times better. Vanquish is a game packed with what makes action movies great. Super slow motion, massive epic boss fights and even corny dialog are all present in this game. All for the typical action movie cliché which brings the game at a fast pace, but that pace is too fast as Vanquish will only last a few hours. Despite it, Vanquish is a spectacular game that many will have to play.

Vanquish takes place in the near future where the planet’s human population has exploded so rapidly that nations around the globe are fighting resources. The United States of America has attempted to alleviate its own energy problems by launching a space station harboring a solar energy-driven generator to provide them with fuel from the sun. However, Russian on Earth has been overthrown in by ultra-nationalist forces called the Russian Star. They take control of the space station and use it to fire at San Francisco destroying all life in the area. In retaliation the President of the United States orders an attack on the station. DARPA sends in one man, Sam Gideon who is equipped with a new fancy Ironman like suit, the ARS. 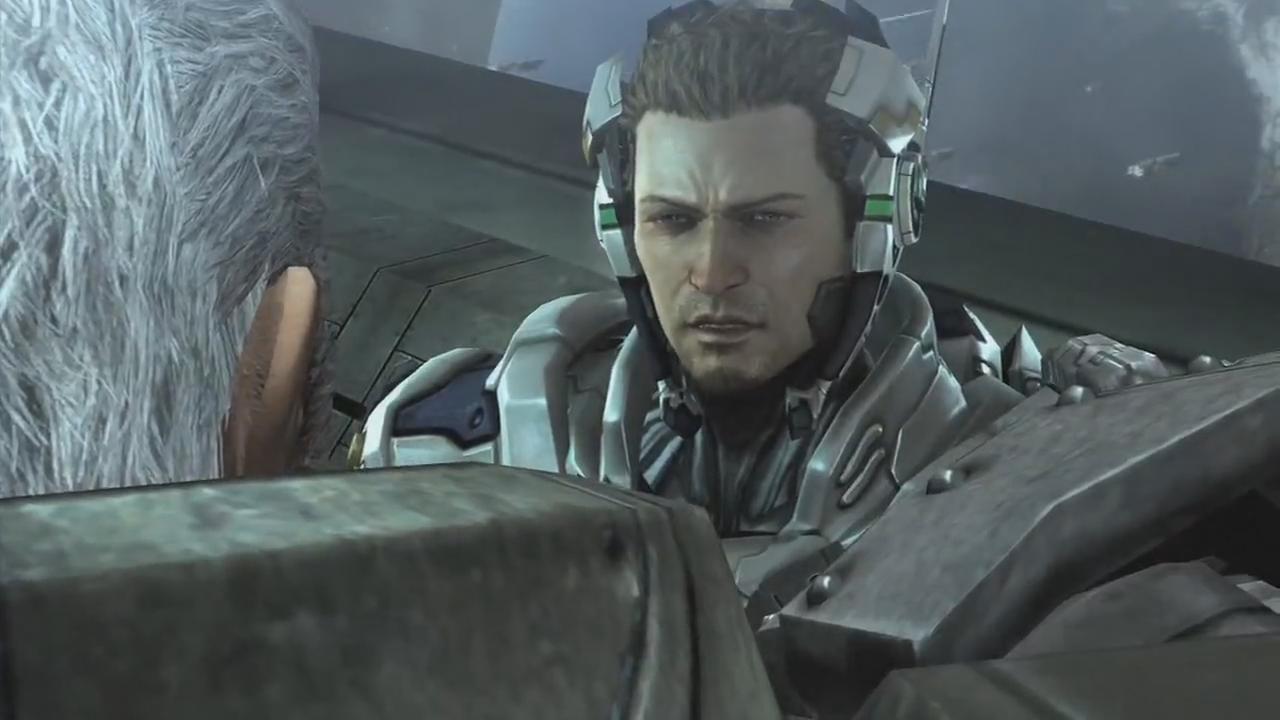 The ARS is a new technological advance in both the world of Vanquish and the gaming world. The suit has many capabilities helpful to the player. The suit has added Boosters for the player to zip around, looking cool, dodging bullets, missiles and lasers while going into cover. While zipping around you can shoot at enemies which also enables another capability, the slow motion mechanic, which lets you go into slow motion anytime you want to damage enemies faster in little time and/or looking cool. Going into slowmo will let you rack up massive damage in a short amount of time and is a good way to take a rather quick opportunity to attack. But you can’t just boot around or play the game a ½ the speed since your suit could overheat.

There is a bar at the bottom right to show you how cooled the suit is. This controls how far you can boost on the floor or how long you can go into slow motion. One problem I had with slowmo is that if you are on low health the suit will automatically go into slowmo, if the suit is already cooling down or overheated it will still go into slow motion even if your health has recovered. This is annoying because most of the time it’s wasting the slowmo now while I could use it later for other uses. With that there is actually no health bar and you won’t even know if you have low life until you are in slowmo or the screen is red, in this state you only have enough health to withstand a few (varies with difficulty) more attacks before you die.

Weapons are inbuilt into the suit and look way cool when switching them in-between. You can hold a maximum of 3 weapons and grenades or EMP grenades. The weapons and grenades can be upgraded to include more ammo capacity, better range or more overpowering. Weapons range from the basic Assault Rifle to the high tech LFE gun. Weapons are found spontaneously around the map in boxes, from enemies or in capsules. All guns have their strengths and weaknesses when against enemies but soon after you upgrade them they all seem to do the job. There is a melee in the game which does quite some damage, but I just don’t get why when you use the melee and hit an opponent no matter how many times, the entire suit overheats. 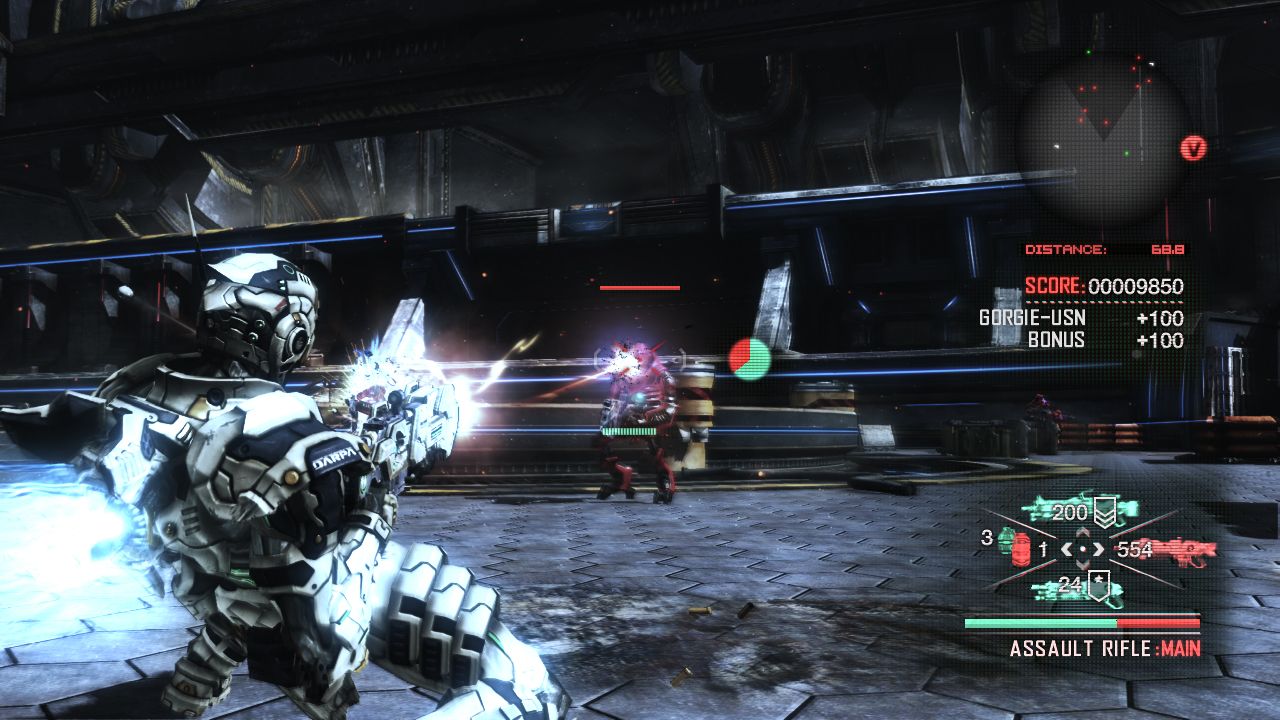 The enemies are all robots even though they are Russian for a bizarre reason. The basic infantry are red and look like elites from Halo and have the standard machine gun. There are some variants with snipers and rocket launchers. All types of enemies can melee you and most of them can kill you in one hit. This is especially annoying as most of the time you will die from these 1-hit kill attacks after a long struggle with heaps of enemies of a boss. But the standouts in the enemies are the bosses. They are big. Humongous and overkill. The first boss (which was included in the demo) first is a spider like machine. Then once you defeat the massive boss you think finally, I killed that thing- until you see it transform, into a larger robot with Lasers!! Then you think Holy mother of @#$&%. That right there is what impression you will get of the many bosses in the game.

There are many bosses used in Vanquish, sometimes you will fight them more than once on different occasions with different variables. This is all welcoming and the different occasions are enough for a more intense ride, such as fighting two transforming bosses at the same time. There are sub-bosses which first appear as a single enemy but then the numbers rack up and you will be taking on heaps of them. This is a great way to cause stress and intense battles making them more memorable and epic to finish. There are some Quick Time Events in the game, which are becoming more apparent in most games released this year. The QTE are quick, fast and sometimes even caught me by surprise that there was a QTE to occur. These QTE are only used on bosses and looks great, shame they can’t be used for more types of enemies.

The Game is set in the future and in a space station so naturally you would think the same background over and over again. Well the space station in Vanquish is different, the background changes and even in one level you are in a lush jungle like environment. The game looks fantastic as the enemies are very detailed as well as the environment. A lot of things are going on while you are facing the enemy, such as a giant robot attacking your reinforcement. The ARS itself looks cool with its sci-fi look and the boosting and slowmo are fantastic too. Going into slowmo you can actually see the bullet like in bullet time. Explosions and lasers look fantastic and are still great to look at even if you die from it. 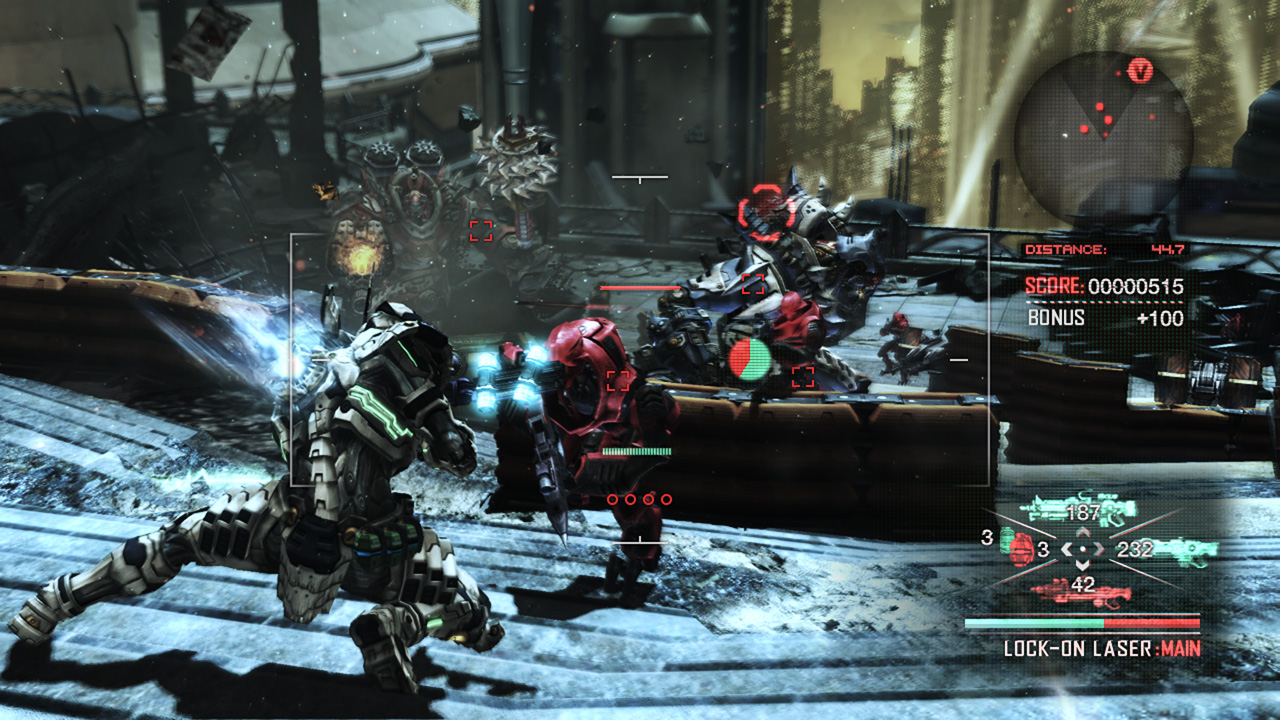 The campaign in Vanquish has its shortcomings. The campaign itself is only over 5 hours long while it does keep the 6 hours fun, the game may not be worth the full game price. The dialog in Vanquish is really cheesy like an action movie. Stuff happens and everyone either overreacts or has a hard time expressing emotions. Sam himself has a signature thing like all action heroes; Sam likes to smoke- he smokes a little too much, such as like IN EVERY CUTSCENE! Plus you can even smoke in game by pressing the boost button in cover. I’m not sure if he ever watched those ads on TV. The story itself is quite bad, it follows the formulae of every cheesy movie and if you don’t want it spoiled, you shouldn’t have watched all those 1980-90s action flicks. The music is quite noticeable with songs during fights are quite sci-fi and fit into the vanquish world, and also heighten the epic experience altogether.

Vanquish is a fast paced, action and epic game. It combines real fast and awesome gameplay with real bad dialog and short game. Vanquish takes you on an epic but clichéd tale that will keep many folks happy with many huge bosses and the overpowerness of the player. It is a shame that it didn’t have more features or even multiplayer to make the game have a better play time .Although there are challenges to complete after the story, you probably won’t play this more than once.