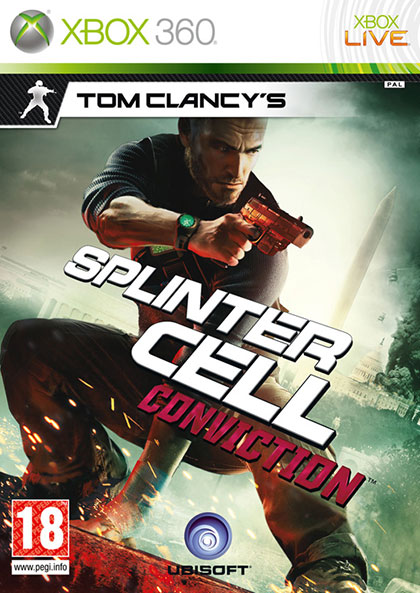 We all know how popular Tom Clancy is now in the Game world. His popular ideas merged in games to create the best series of shooting games from Ghost Recon, Rainbow Six and of course Splinter Cell. The next inline in the famous stealth series is Splinter Cell: Conviction. We join Sam Fisher again on his journey to infiltrate, take out and find out his targets and his mission. This time we play a much older Sam Fisher like with Solid Snake (both master infiltrators). Compared to previous games in the series the most basic and fun things about the stealth have been removed such as moving bodies.

Sam Fisher is now 3 years older, has a white hair and a cool goatee. This is also 3 years after his daughter; Sarah died from being run over by a car. After some time away from the job a bunch of hitmen is out to finish the job. After taking the thugs and their Leader Sam finds out the hitmen were hired by a Mr. Kobin, who was also responsible for Sarah’s death. Arriving at Kobin’s mansion he finds out due to some first class interrogation that Fisher was messing is something much bigger. Finding out his daughter is still alive Sam will do anything to find where his daughter is and the men responsible. 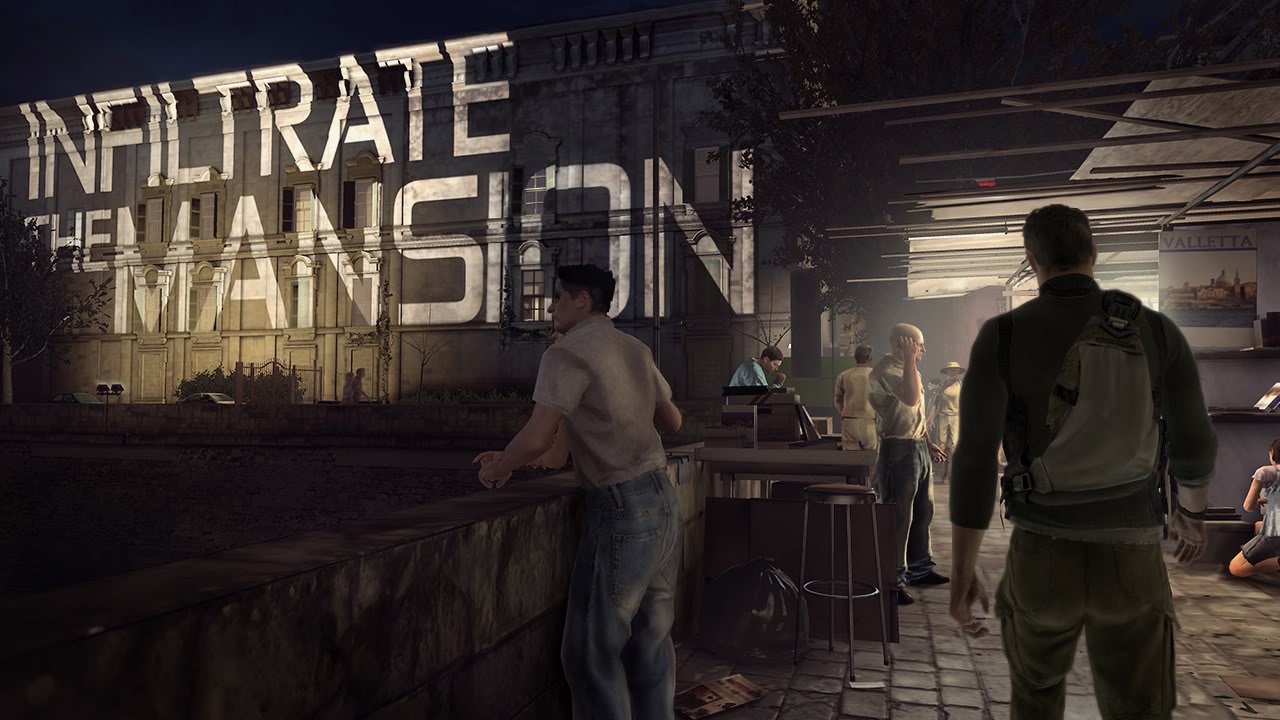 There are many new things introduced into Conviction which make it fun and many which do the complete opposite. First is the new cover system, which is done quite well. Sliding into cover looks cool but also a new option is to head into the next cover without jumping in and out, which is quite crucial in stealth games. You can blind fire in cover which is great if you don’t want to die, or go for those head shots if you get lucky. The story is told in an innovative way showing you the story in pictures shown on walls and floors. Also your next objective will appear somewhere on places you can’t miss, but if you do just press back and the objective appears out of nowhere on the ground.

Another addition is the Execution, which lets you target many enemies and take them down in brutal matrix style kills. In order to use an Execution move you need to knock (in this case kill) enemies out next to them in a CQC kind of way involving guns. And if you don’t decide to kill them you can save them for later as a human shield. You can now mark enemies just to find out which ones are more important than the other. It comes in handy when peek underneath doors and through windows. Yes one stealth thing remains is the peek feature, which lets you peek under doors to look at what you’re facing. 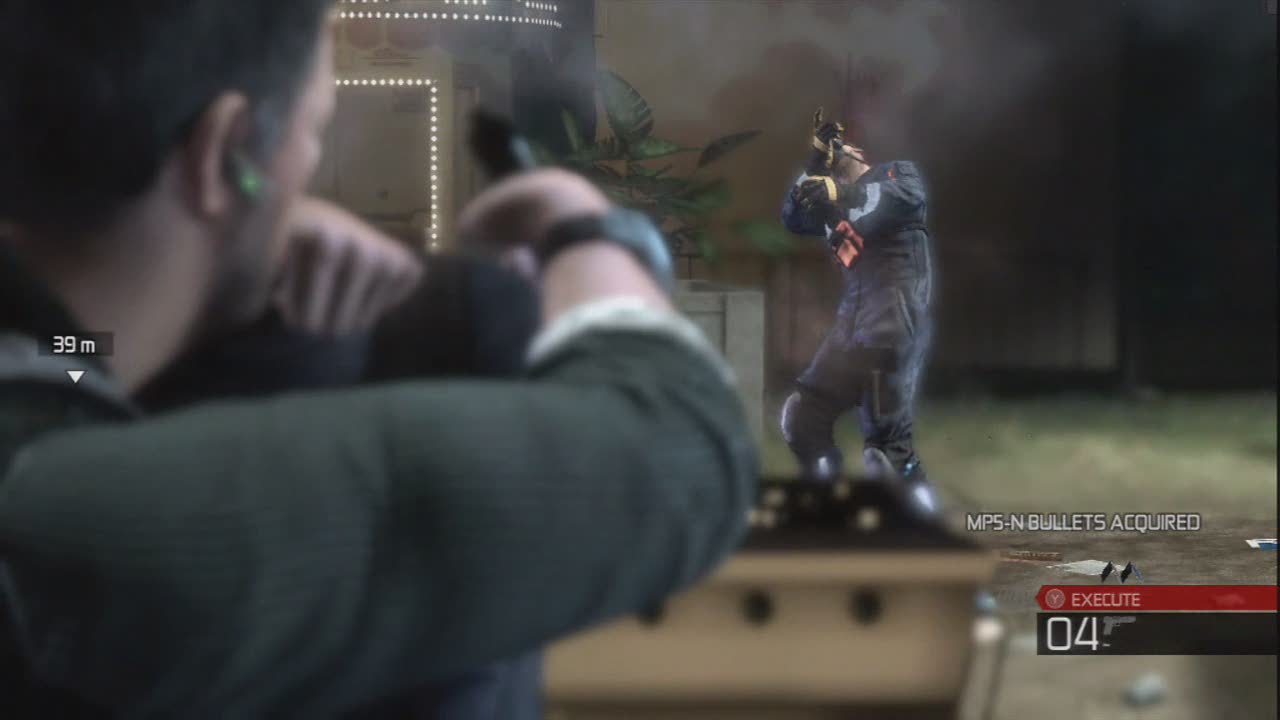 One of the major things you know is that when you are in hiding or stealth the entire screen and world go black and white when compared to being in the light when the screen is all colorful and bright again. This will tell you if you are hiding or not but it well get a bit annoying how everything will be black and white for most of the game. But in each level there is limited amount of hiding places and shadows, solution? Well take out the lights. There will be heaps of lights in each level restricting places to hide. You can just shoot the lights out or find the switch and turn them off. But be careful as enemies will know if any lights have been shot out. Still with weapons you can equip different weapons from Silenced pistol to AK-47 and EMP grenade. You can upgrade weapons to add more ammo, better sight and more power. To get these upgrades you need to complete some challenges such as 5 stealth headshots or finish a mission without an alert.

The overall AI of the enemy is quite good, once they hear something out of the ordinary they will investigate with their torchlights. Once they find you they will shoot until you’re dead but if you manage to sneak away a new system called “Last Known Position” are at play. Last Known Position is exactly what it sounds, the enemies which located you will continue to search and fire at the position they last saw. So this is good to set up traps, and to flank them because they will go towards your Last Known Position. Another new thing which was added is interrogation which lets you think of interesting ways to interrogate targets by using the environment. Sounds cool right, well the first interrogation will be interesting but the interrogations done later in the game do get boring and repetitive as much of the environment cannot be used or be used in a better way. The music during the campaign is quite good and tense, making the atmosphere of the game mush richer and better. While this is a stealth game you will be more likely to charge head on into enemies and taking them all down, but if you get shot 3 or 4 times that’s it, you’re dead. The cover system is good for stealth game play but for some missions which requires all out action is just doesn’t feel right.

The Single Player is quite good and unique but it could be much better especially with the interrogation section and a bit more stealthy elements can make this game a hit. None the less the Single Player of Splinter Cell: Conviction may be short but quite satisfying. 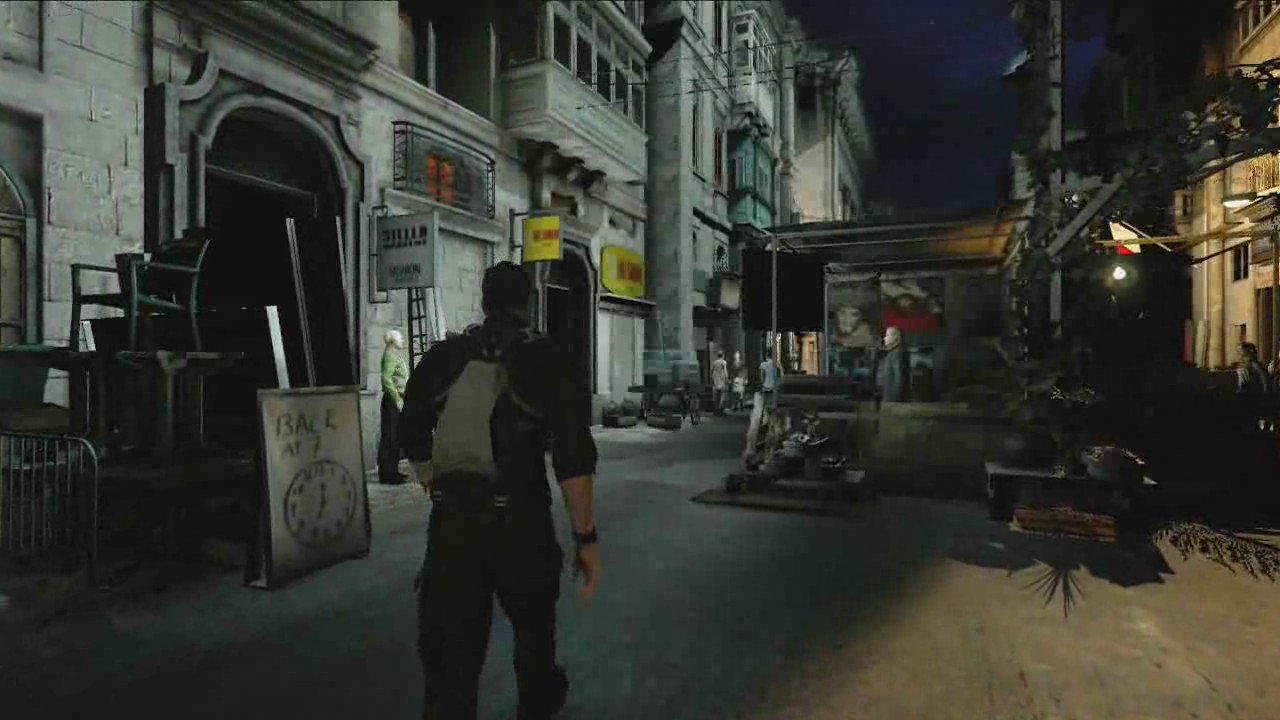 Something new to the Splinter Cell series is a 2 people Co-op mode, while normal multi player is also included. The Co-op Campaign is another story set 10 days before the main single player story. You can play as either Third Echelon Agent Archer or Voron agent Kestrel infiltrating into multiple missions in Russia. The game can be played in split screen, via system link or online. Co-op is very like the single player campaign with a friend but there are a few better additions. One is when one person is down the other has time to help him. As he is down you can still shoot enemies approaching similar to Call of duty: Modern Warfare 2’s Special Ops. Co-op also lets you travel into two different ways to find the objective. Working together can also be fun, one person take out the lights while the other takes out the guard.

The usual competitive multi player called Deniable Ops is also here which can also be played in split screen. These involve Hunter, Infiltration, Last Stand, and Face-Off. While Face-off is the only deathmatch mode the other modes can be played in single player and split-screen. Hunter lets you and a friend try to hunt down all opponents in the map, Infiltration is what it is, Last stand is defend and EMP generator from waves of Nazi zombies, I mean Locus, I mean PMC. All of this is gold which enhances the game much further. 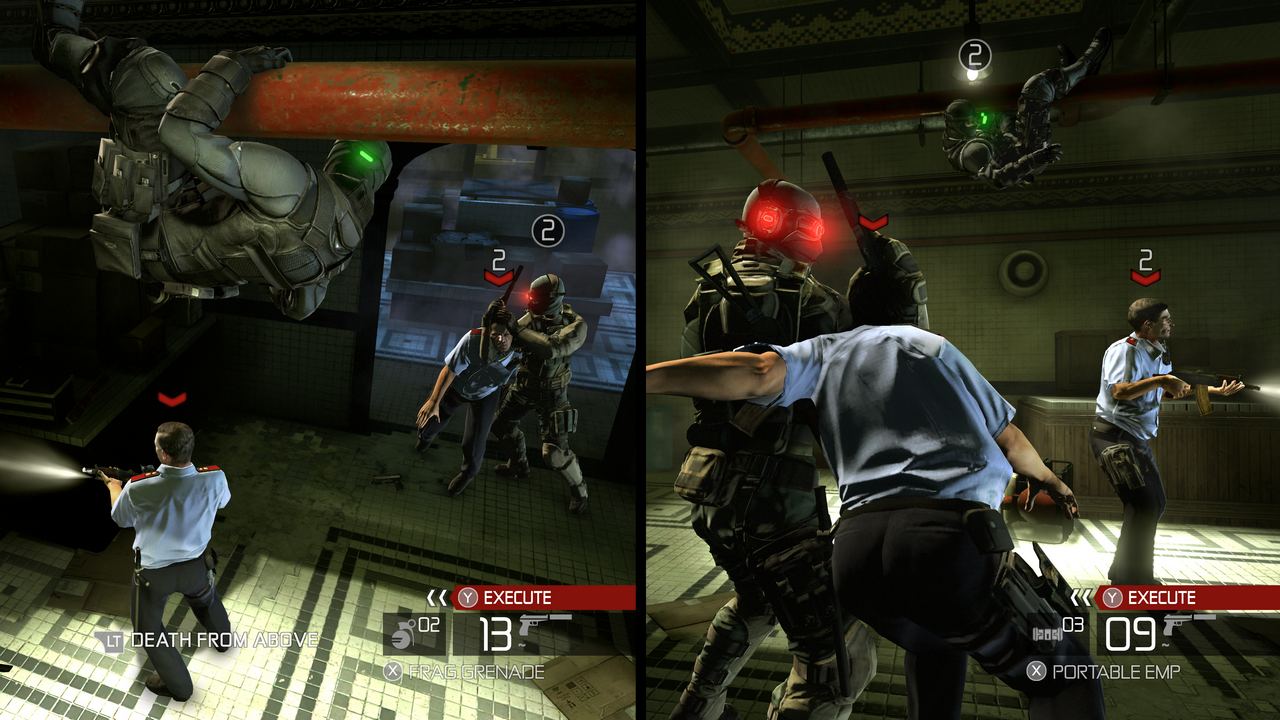 The multi player is the best part of Conviction with a great new Co-op Story and fun multi player modes. Helping each other is fun an enjoyable but Face-off is the weakest one of the pack.

Overall Splinter Cell: Conviction has some good ideas and game play for the single player but the interrogation; short campaign and being able to die in 4 shots can ruin the fun. The new cover system, mark and execution are quite enjoyable in both single player and multi player. The multi player of course is the best part and who doesn’t like playing with friends? This is an enjoyable game that dwells more into the action rather than stealth, if you’re a fan of the other Splinter Cells be prepared, this is completely different for the good. 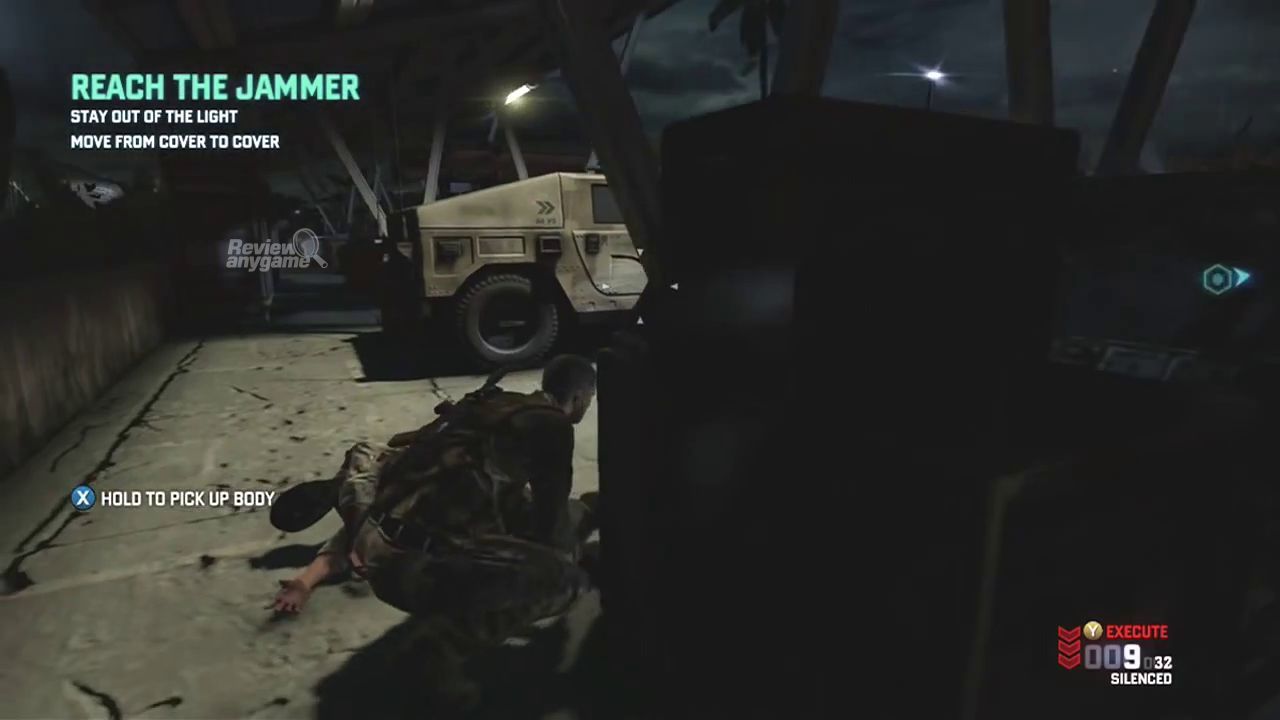 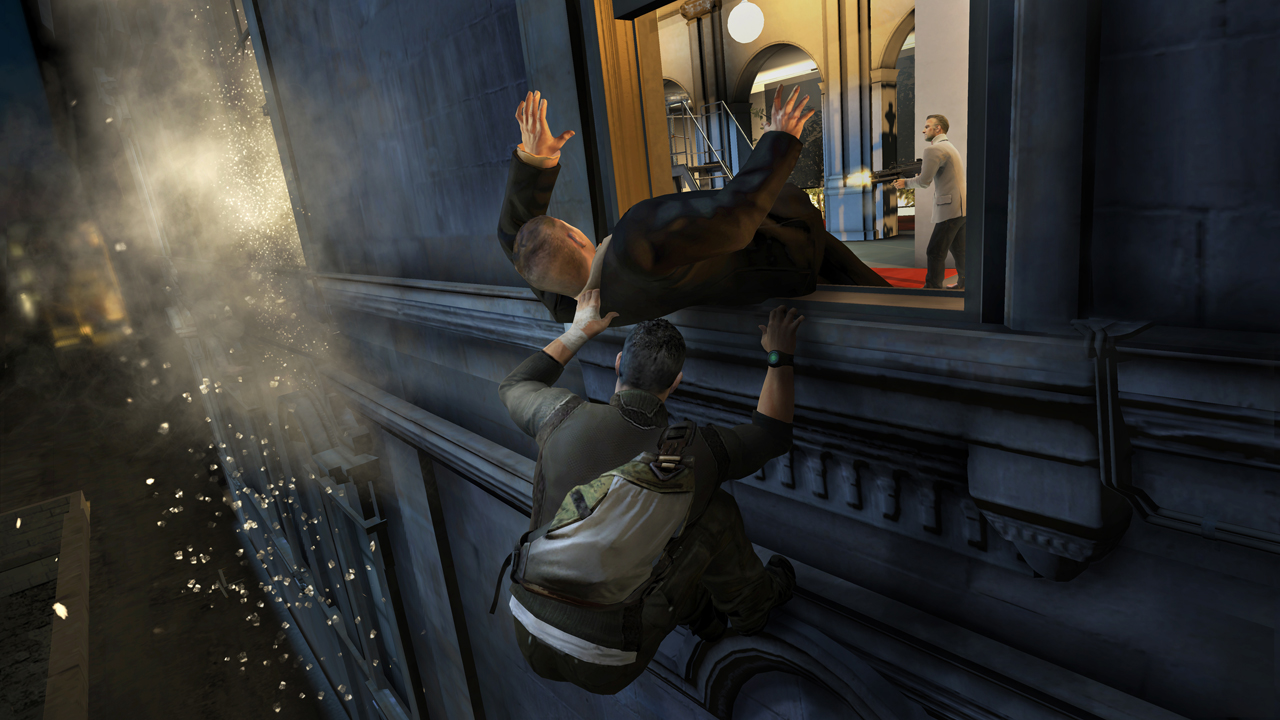 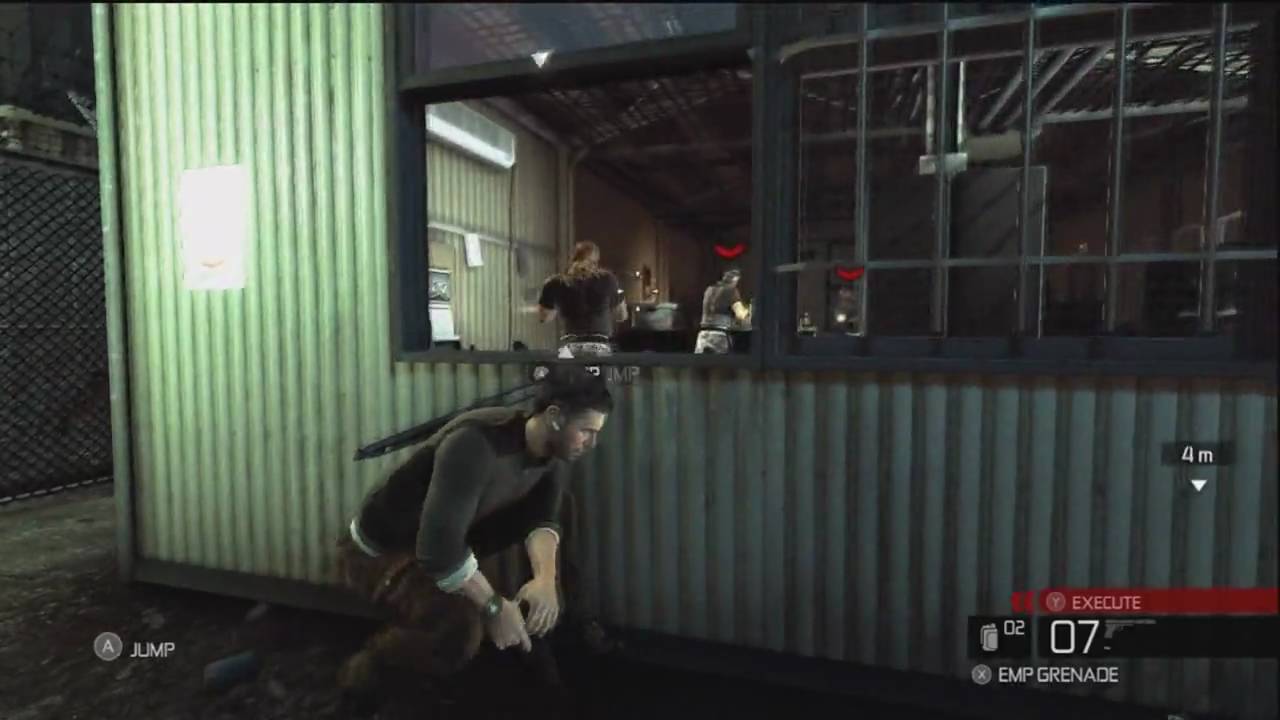 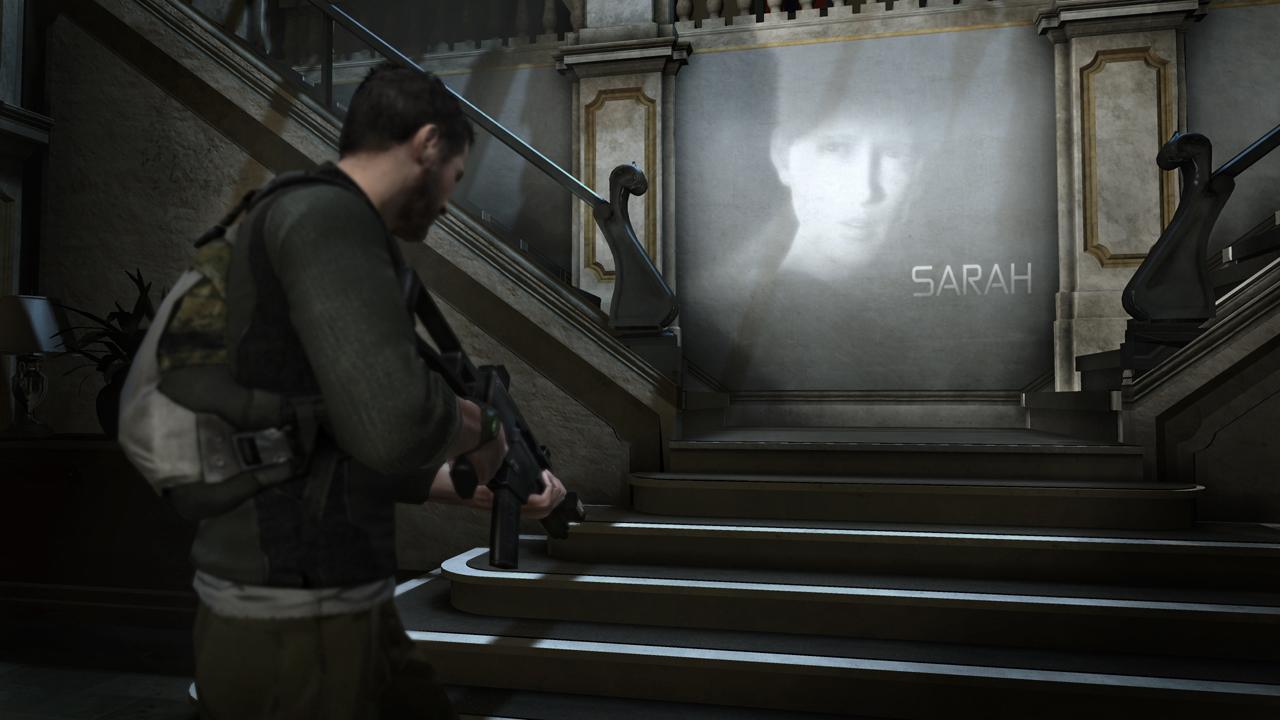 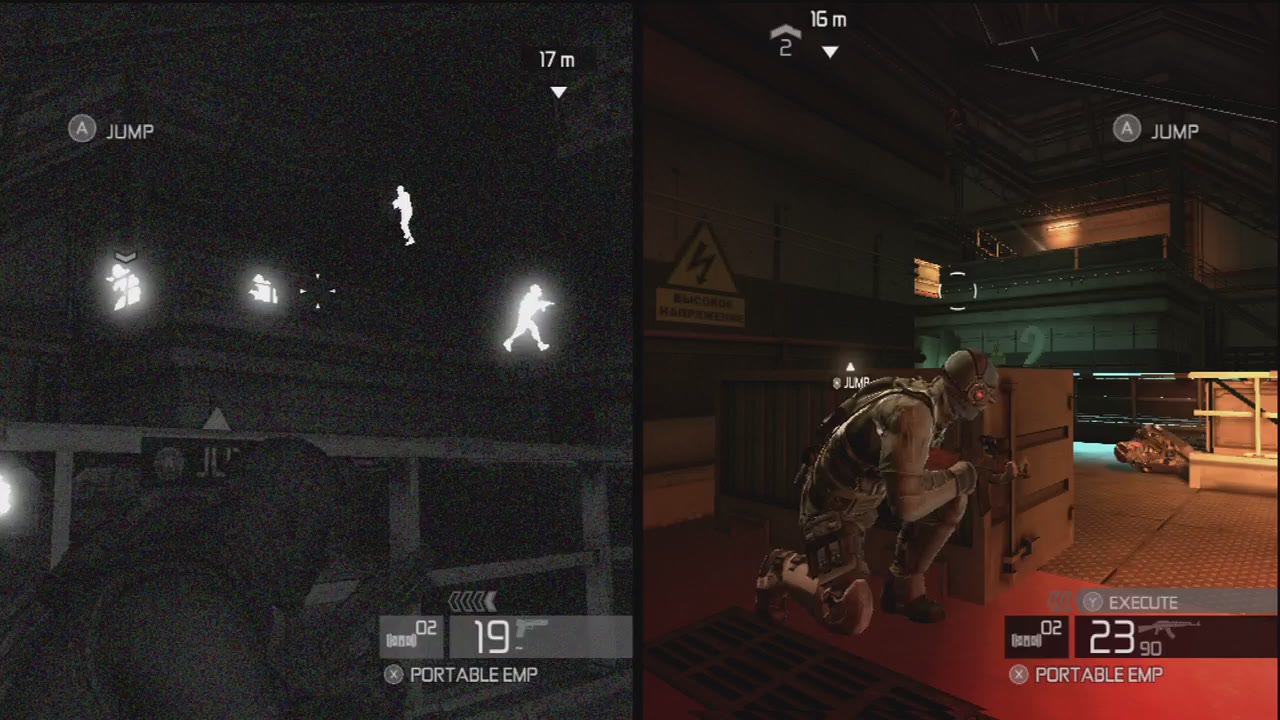 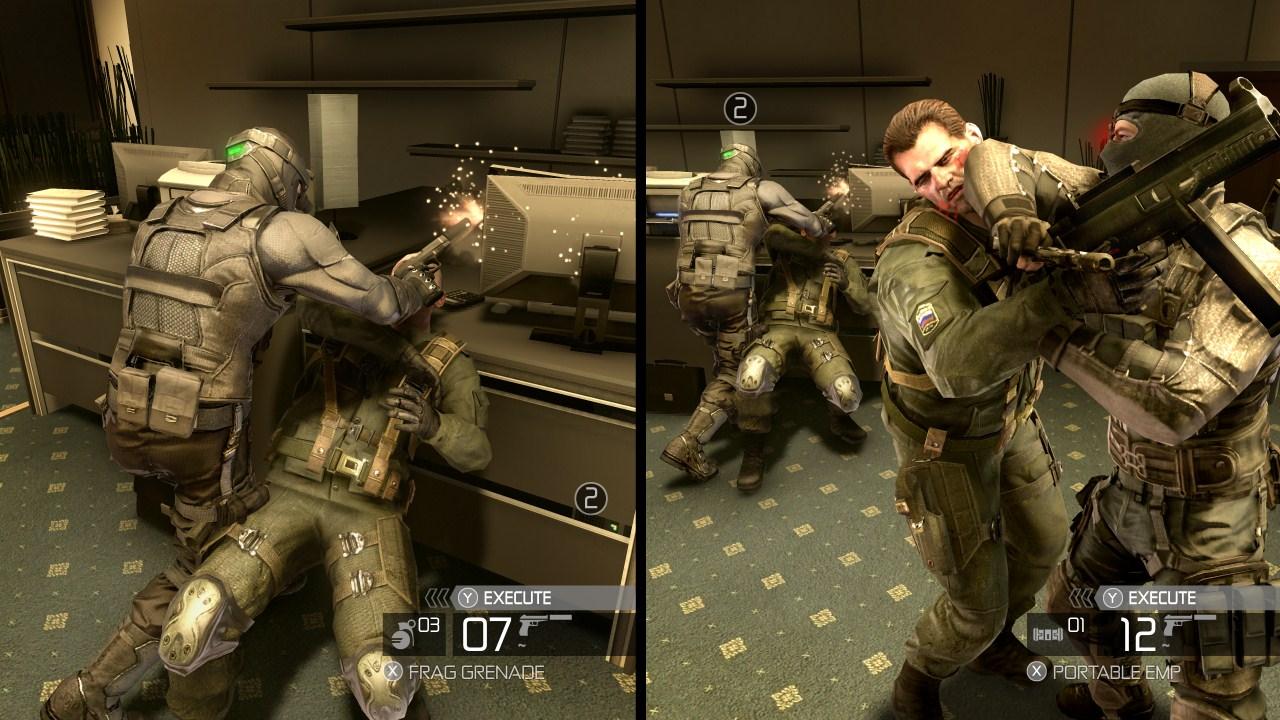