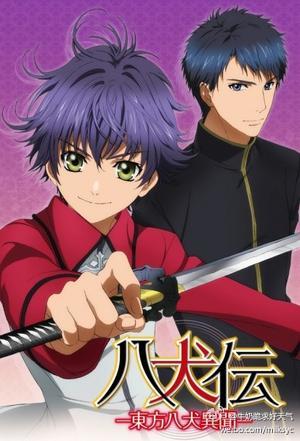 When their village was wiped out five years ago, only Shino Inuzuka, Sosuke Inukawa, and the girl Hamaji, who was raised as if she were their sister, survived. And both men inexplicably have the same peony-shaped birthmark. When they went north as part of the army three years ago, they went to confront demons and came back forever transformed. Now the Imperial Church has come for Shino and Sosuke and they must find eight mystical gems and their owners or face a fate worse than death at the hands of the Church.

There’s nothing more magical than an anime with supernatural themes- well, duh. Hakkenden- as its name will be called henceforth- for some reason is called Maou Yuusha when the video is running, so I’m sure if there is an inside joke or just the guys making a mistake. Regardless of petty things, Hakkenden has not been on my radar and I decided to pick this up- like 90% of the other anime this season. So, the first episode is out and I can’t think of an engaging introduction- so there’s that. 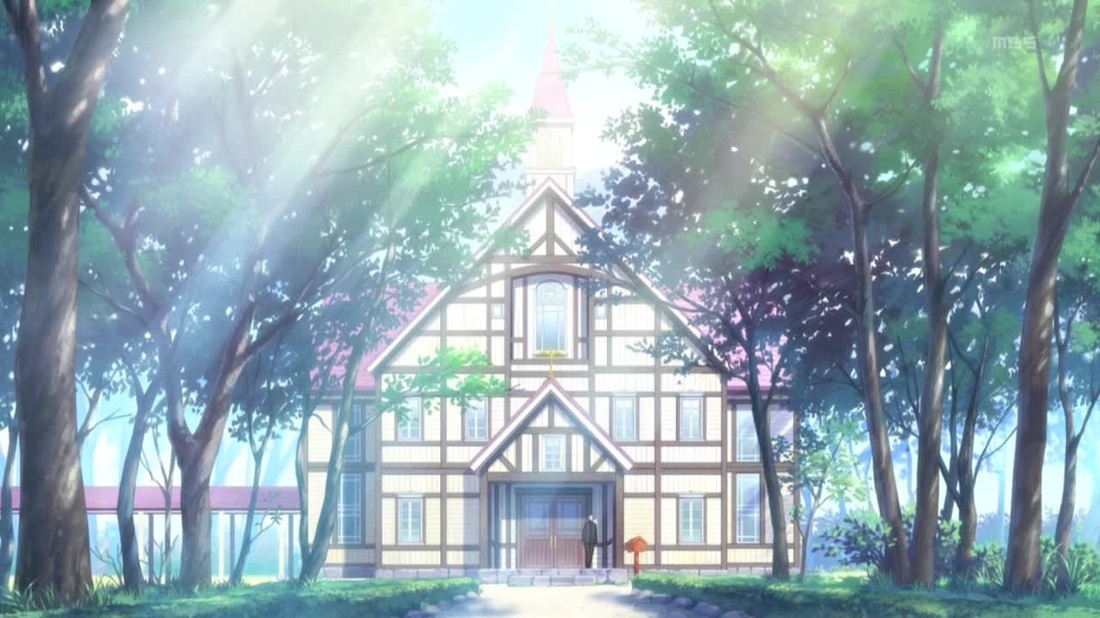 The first episode is nothing short of solid and we see the usual ominous flashback at the beginning where the Main character seems to be dying around a burning village- MC is also a girl. Then she is approached by a guy with long hair- presumably Sephiroth since burning down villages is his staple- and gives her a sword and tells her live. Then Opening and cut to the cerebral peace and quiet forest where we meet the actual Main character, Natsu- I mean purple haired Shino. Then a crow called Murasame brings the dwarf in the flask from FMA, but Shino being the clever man he is throws it away. We also meet a girl who is seen in the burning village: Hamaji who also sings well and cooks bad. Then we meet Sousuke who seems mature and a boy getting beat up by his dad- Kenta. Then later on some villains are revealed: Kaname and his Anbu force and the long haired ‘savior’ is revealed to be Rio who seems to have power over Kaname. This episode introduces the main characters well and their personalities are well formed. 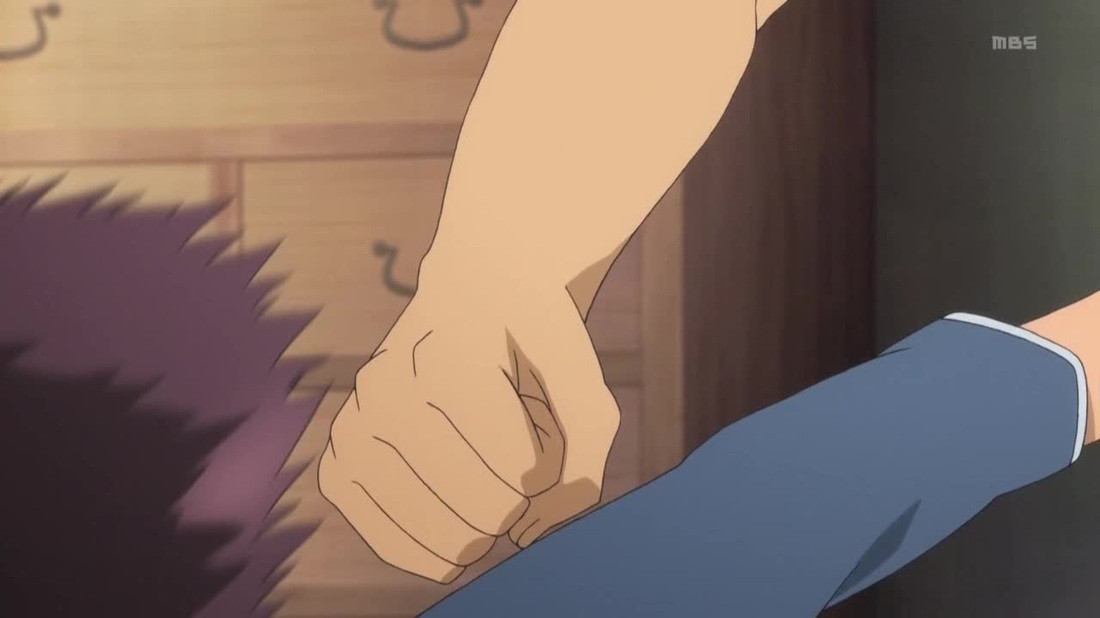 As for the episode itself, it wasn’t bad but solid. The introduction introduces mystery and a history between the characters as well as a sense of supernatural power. The majority of the episode paints the serene life of the main characters who escaped the fires and live peacefully in a church by a weary village. Of course they aren’t normal since Shino can speak to spirits and animals, and whatnot. The main cast are also attacked by Anbu- or ninjas in blue cloaks wearing fox masks. Shino apparently has Murasame sealed within his arm, and when summoned the sight isn’t pretty. The anbu men all die by one slash of the crow- yea. Kaname the villain has sent the men and seems to be talking to a pack of wolves through a blue flam- more spirits. Then it is revealed that they attacked the church because of the dog power inside Sousuke and crow inside Shino. I mean really, dog powers… continuing along, Kenta says he saw a girl that looked like Shino but apparently it was him long ago during the village’s fire. So that girl in the beginning was shino, who had long silky hair for some reason. That girl was a spirit and eventually transformed into some grotesque monster that had some sticky white substance- stop thinking too much on that- and trapped Kenta. Doggy Sousuke rescues him and Shino turns Murasame into a sword and slices the monster in a matter of seconds. While that happens, wolves steal Hamaji and a new adventure starts for Sousuke and Shino to take her back. 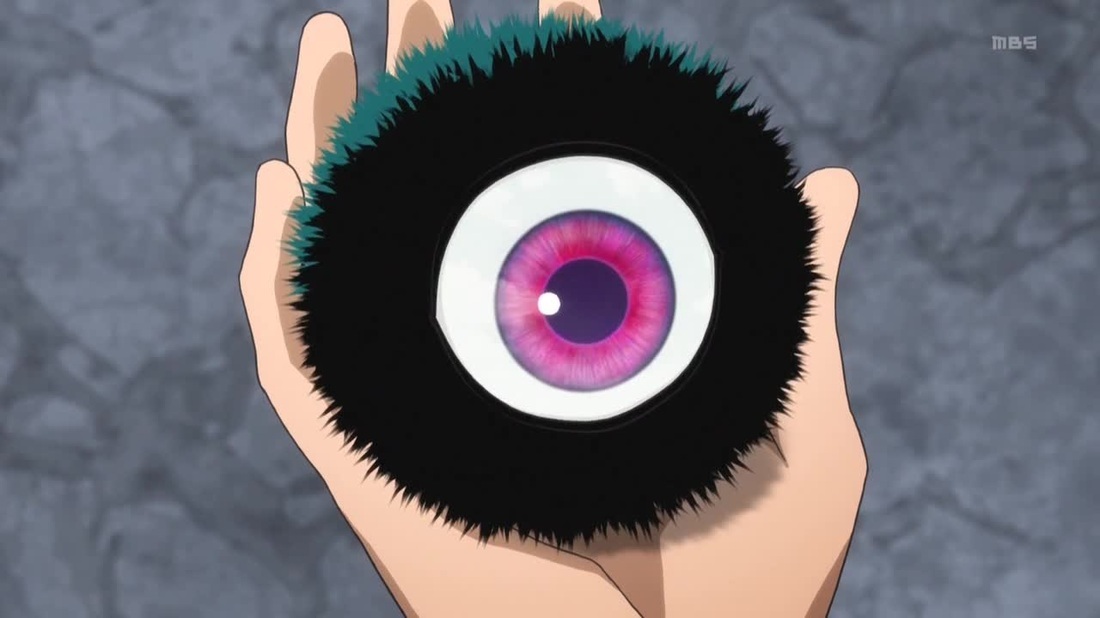 There is a major theme on Japanese mythology, about the religion and the spirits. It seems rather interesting and there is talk about the demon gods and bloodline running through four families that would hold such demonic powers. And there’s a kick into the religion about why a church that believes in one god, should try to capture the power of other demon gods. Most of the episode is to set up the peacefulness- I know I mentioned this a few times- so its purpose is to contrast this episode with the rest. Hamaji is also a pleasant singer but a poor chef. Although we don’t see much of her, her character seems to be the main goal of the anime. Also, I don’t see Kenta having a bigger role out of this episode- I could be wrong and he could be a demon king, but not seeing much yet. Also it seems that the blonde people wearing white are the villains, not imposing racism here but just observations. It seems Kaname is working for the central church and has ties with Rio, who gave Shino the Murasame. We see that Sousuke is a calm and mature person while Shino is impatient and aggressive- like Natsu.

Church is also a prominent theme, with Hamaji singing some hymn and what Sousuke is wearing is reminiscent of a priest outfit. That and the fact that they run a church and the central church is the main perceived villain. Also, the dwarf in the flask- whom is fluffy- expands for some reason and destroys some of the church. Towards the end Sousuke and Shino decide to rescue Hamaji and hop aboard a train… That happens. The action parts are cool with Shino showing his power through its voice and sword-crow. There really isn’t much other things to talk about plot wise so onto the animation. 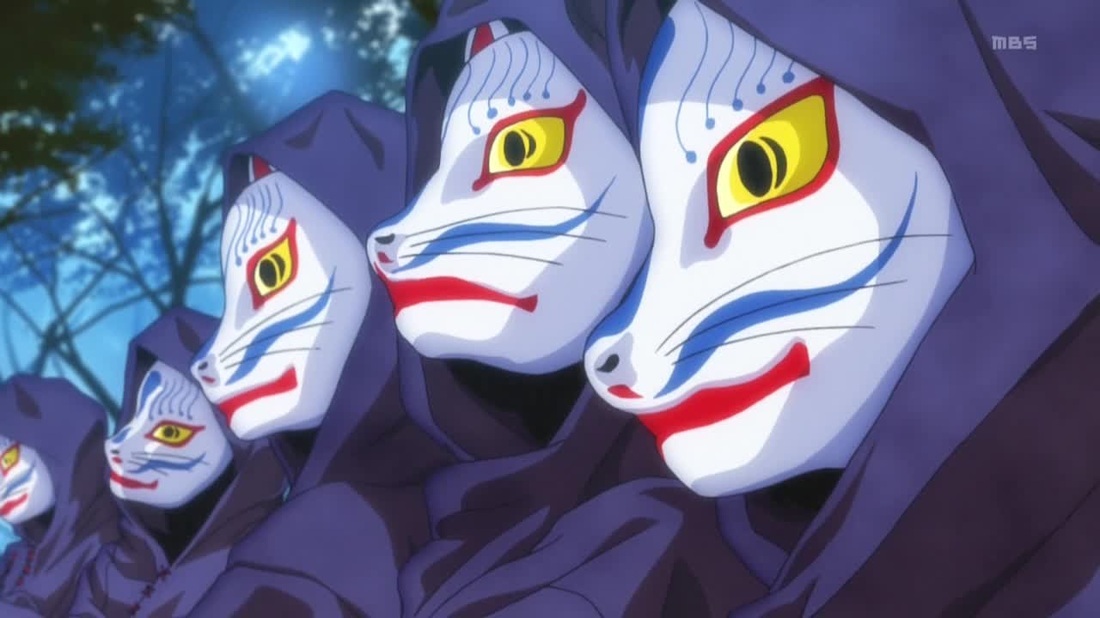 The animation of the first episode is solid as well. Once again a contrast between the peace is created with the visuals, with the burning village in the introduction. The designs on some of the characters hint that it may be a shoujo anime, so I better keep that in mind. And for that reason, it looks like Hamaji doesn’t stand out as much as the male characters do. The backgrounds are sufficient but the various objects that the characters interact with have some visual flair and detail. The most interesting visual aspect would be the fight scenes. The first had Shino power up and summoning the crow through his arm, which is all bloody and ugly. The second had more action and was between Shino and some hideous monster. I mean the monster design was ugly in a good way, how big ugly monsters should. It was intimidating and interestingly designed. As for the fighting, it was all special effects that is enjoyable and brings some excitement and flashes, since the action itself is rather short- Shino is OP.

The opening itself isn’t half bad with a nice song and features a nicely edited video that probably beckons interest. All the detailed men with sharp pointy hair and some mystery about their character make it an interesting opening. All isn’t revealed in this episode and whether there are spoilers, we will have to wait and see. There isn’t an ending to the episode since it want to explain more plot, which isn’t a bad thing. The voices are typical with no jarring voices except Shino who sounds too much like Natsu- I know it’s the same VA, its obvious, but his voice seems a bit off putting. 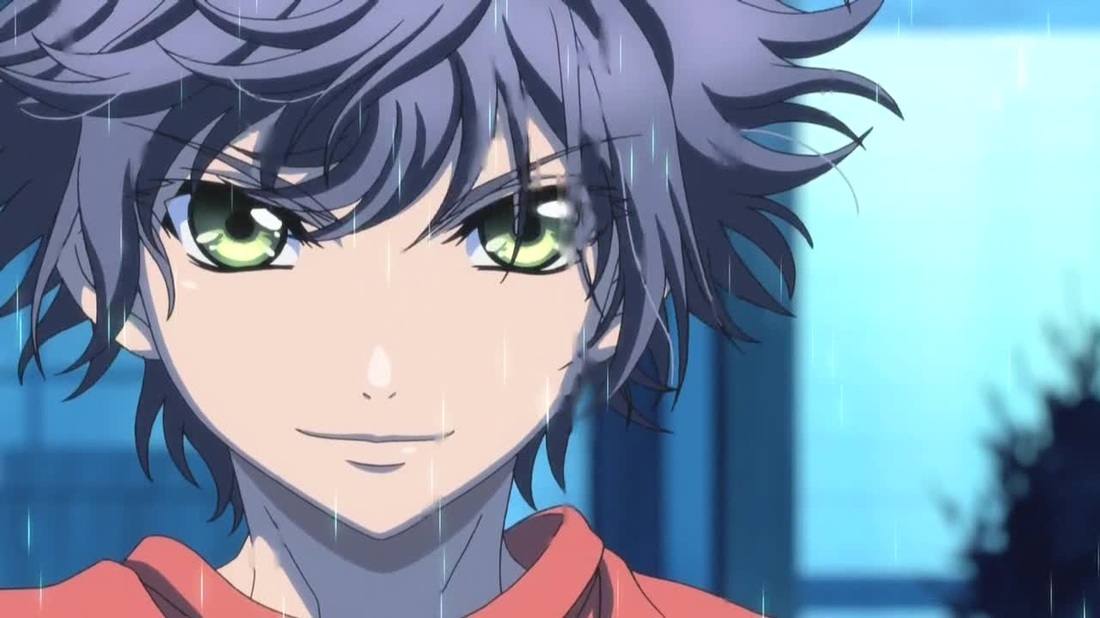 So far, Hakkenden seems to be solid, with its details on the character’s hair and eyes being all pointy and sharp. The animation quality seems high but doesn’t have a lot to show for it other than a few seconds of powering up. The plot has some intriguing mysteries but the most fascinating is that it is around Japanese mythology. Spirits, monsters, demons and other nonsense are major themes and do indeed seem interesting to watch. This could be a very good anime down the road. 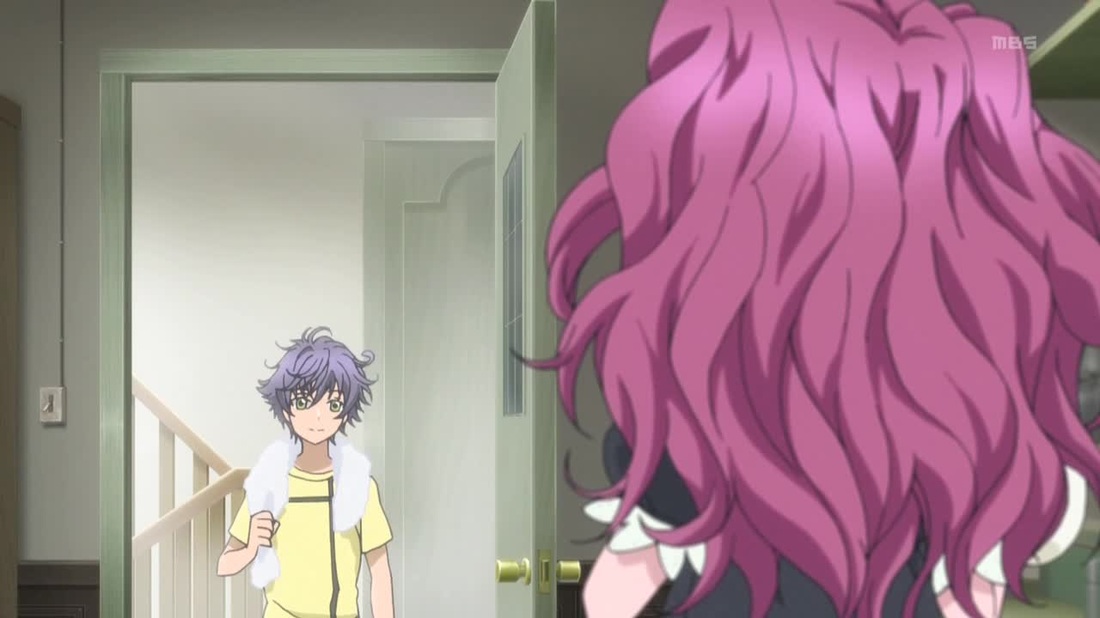 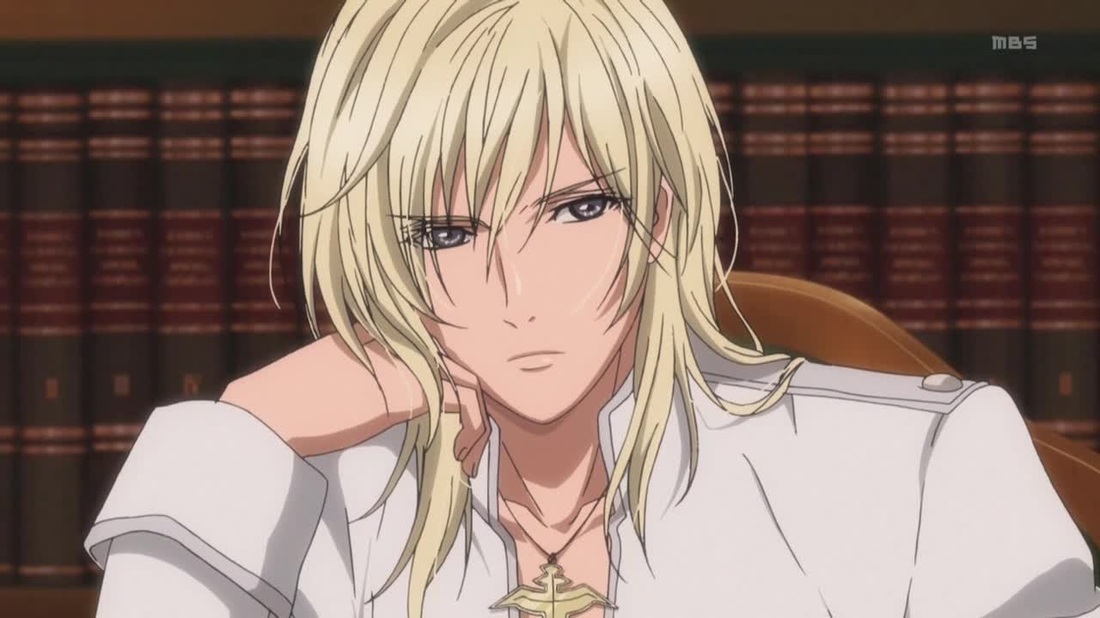 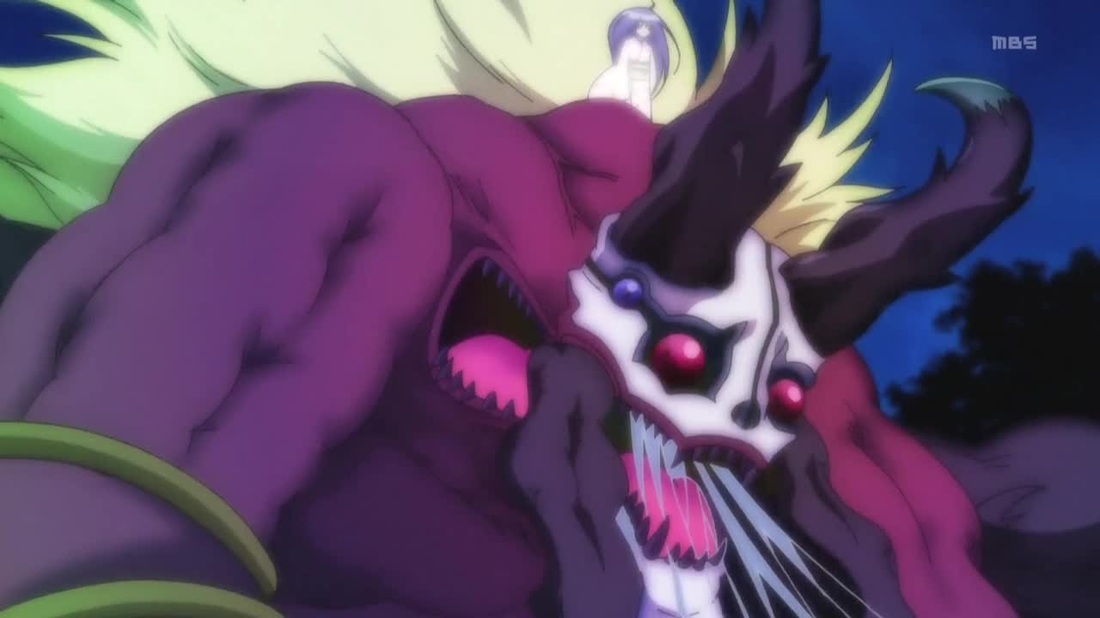 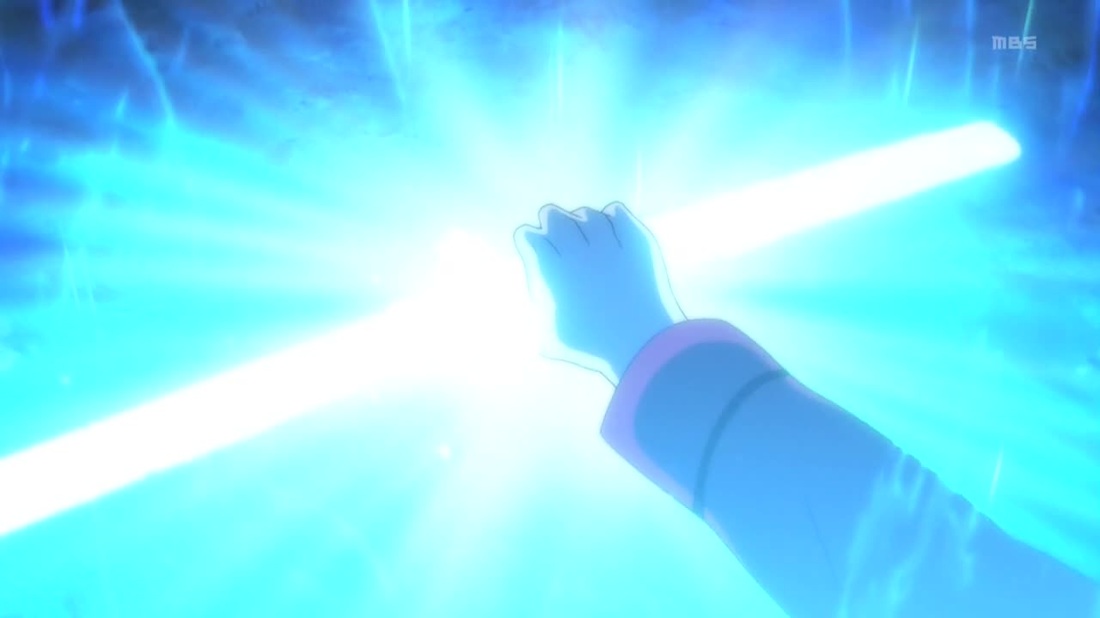