Kouji Seo’s Kimi no Iru Machi (A Town where you live) has been given the thumbs up for an anime adaptation. The announcement has revealed the core staff members of the anime, with the anime being produced by Gonzo (Welcome to the N.H.K., Full Metal Panic). The anime series will be directed by Shigeyasu Yamauchi, the scripts are being written by Reiko Yoshida, the character designs are by Terumi Nishii, and the music composed by Keiichi Oku. 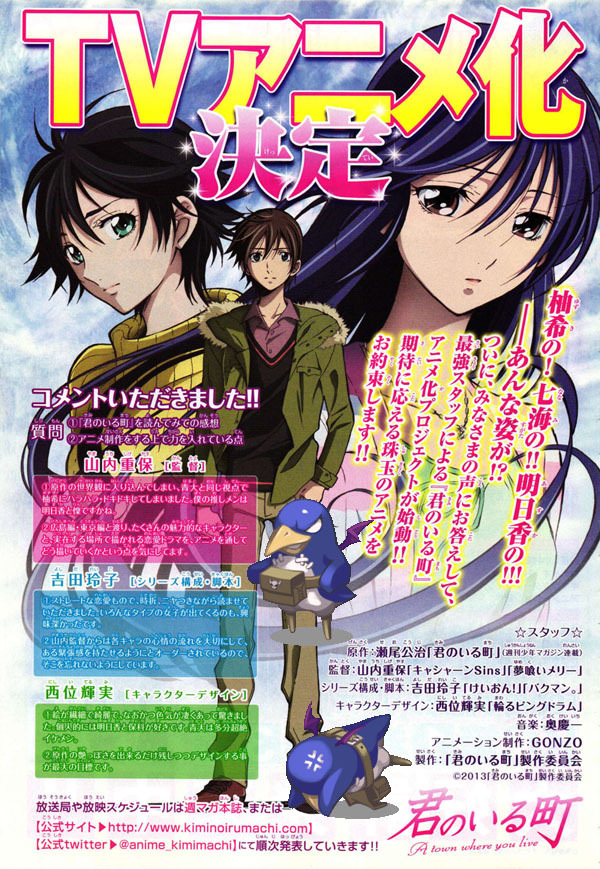 Kimi no Iru Machi originally launched in Weekly Shonen Magazine back in 2008 and has only received two OVAs since the start of the manga. There is no air date for the anime yet, but expect it to air sometime towards the end of the year or the beginning of next year.

Here is a synopsis of the Kimi no Iru Machi  manga from MAL:

Eba Yuzuki has mysteriously decided to go to high school in the countryside. But despite Kirishima Haruto’s objections, she is living in his home. Now he has to put up with a freeloading city girl and even worse, make sure Kanzaki Nanami, the girl he likes, doesn’t get the wrong idea!