Two new commercials have been released for the upcoming music album of Doga Kobo’s (Gekkan Shoujo Nozaki-kun, Yuru Yuri) anime adaptation of Cherry-Arai’s Mikakunin de Shinkoukei (Engaged to the Unidentified) 4koma manga. The best album, called Mikakunin de Kashoukei, will be containing the 14 best songs from the anime. The composer of the series’ music is Jun Ichikawa (C³, Futari wa Milky Holmes) and the 14 tracks include: Tomadoi→Recipe (the OP), Zentai-teki ni Sensation, Masshiro World (the ED), Houkago Vacation, Honto No Kimochi, Rabu ♡ Supesharite, Good♡Smell, Eternal My Sister, Kitchen Patrol, Chao Chao ♡ Dolce, Message!, Welcome! Student Council,  Mukankei demo Shinkou Chuu, and the new song Mikakunin Future. The album will come with a CD containing the 14 songs and a Blu-ray with the animations and 60 minutes of Karaoke, alongside a special disc sleeve, and a new booklet.

Here is the cover of the Best Album: 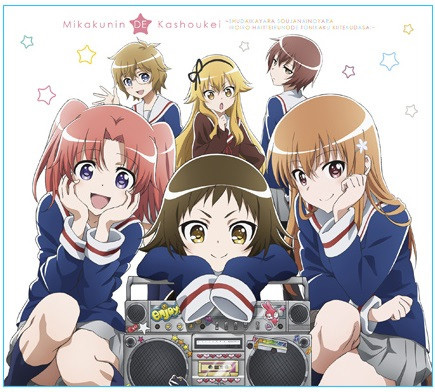 Kobeni Yonomori is a high school girl who lives with her mother and older sister Benio. Upon turning sixteen, Kobeni is shocked to learn that, due to an arrangement by her late grandfather, she is engaged to a boy named Hakuya Mitsumine who, along with his little sister Mashiro, come to live with Kobeni. As Kobeni spends time adjusting to this new family, she learns there is more to Hakuya and Mashiro than meets the eye.