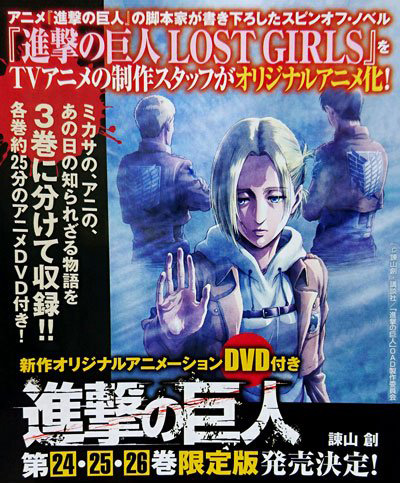 The Attack on Titan: Lost Girls anime will have 3 OVAs/OADs that will come bundled with the 24th, 25th and 26th volumes of the manga. Wit Studio (Owari no Seraph, Koutetsujou no Kabaneri) will return to produce the OVAs.

Attack on Titan: Lost Girls is a spin-off novel written by Hiroshi Seko that was released in late 2014. The novel features two stories that cover the backstory of the lead female characters, one on Mikasa and the other on Annie – Mikasa: Lost in the Cruel World and Annie: Wall Sina, Goodbye respectively. The novel was also adapted into a 2 volume manga by Ryousuke Fuji. The manga adaptation was published in Kodansha’s Bessatsu Shounen Magazine.

Attack on Titan (Shingeki no Kyojin) is an action manga series written and illustrated by Hajime Isayama. It started in 2009 and is published in Kodansha’s monthly Bessatsu Shounen Magazine. To date there has been a total of 21 compiled volumes. A prequel light novel adaptation started in 2011, and two spin-off manga started serialization in 2012: Shingeki no Kyojin: Before the Fall and Shingeki! Kyojin Chuugakkou. In April 2013 the series was picked up for an anime adaptation. The anime series was produced by Wit Studio. The series has grown in popularity since the anime’s debut, with the manga selling over 36 million copies as of April 2016. Numerous game adaptations of the film were created following the anime, including a PlayStation 4 title. Two live action film adaptations were be released in Japan in 2015. 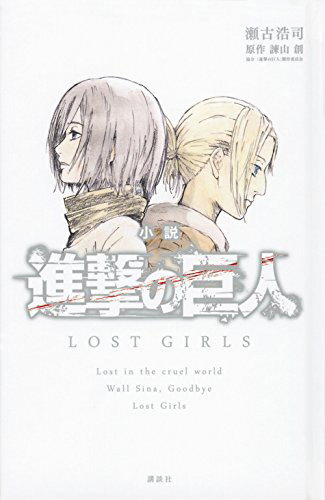 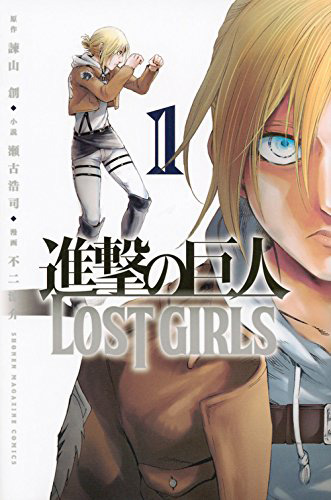 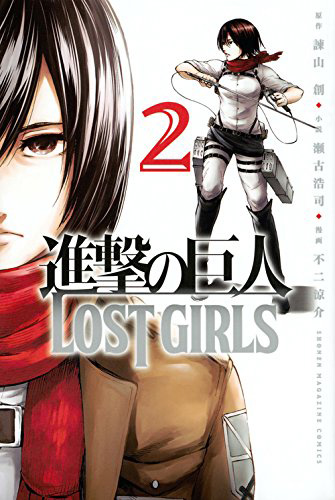 An anime adaptation of Attack on Titan: Lost Girls has been announced as a 3 part OVA series. The first episode will release bundled with volume 24 of the Attack on Titan manga. Further details about the anime will be revealed at a later date.