It has been a little while since our last TV and Blu-ray Comparison. Today it will be slightly different, we have a set of comparisons of the Girls und Panzer OVA, Girls und Panzer: Kore ga Hontou no Anzio-sen Desu!. But the anime has not aired on TV (not yet anyways) and has just released on home media The OVA itself premiered at 12 Japanese theatres in June this year, and filming in a theatre is a big no no. So how will be compare the Blu-ray release with the original? With the promotional video/trailer that released of course.

It may be slightly odd to compare the promotional video with the Blu-ray release, but it is the closest we can get to comparing the original broadcast and the polished home release.

Note: There will be spoilers for the Girls und Panzer OVA

There are also other comparisons with some of the bonus footage from the Girls und Panzer: Kore ga Hontou no Anzio-sen Desu! Blu-ray. Usually we see minor changes being made to fix up some small errors and nothing too major changes. A bonus in the home media release showcases a drastic change from the initial scene from the OVA in the Blu-ray release.  As you can see the environment and vehicle in the background of the scene has altered dramatically. 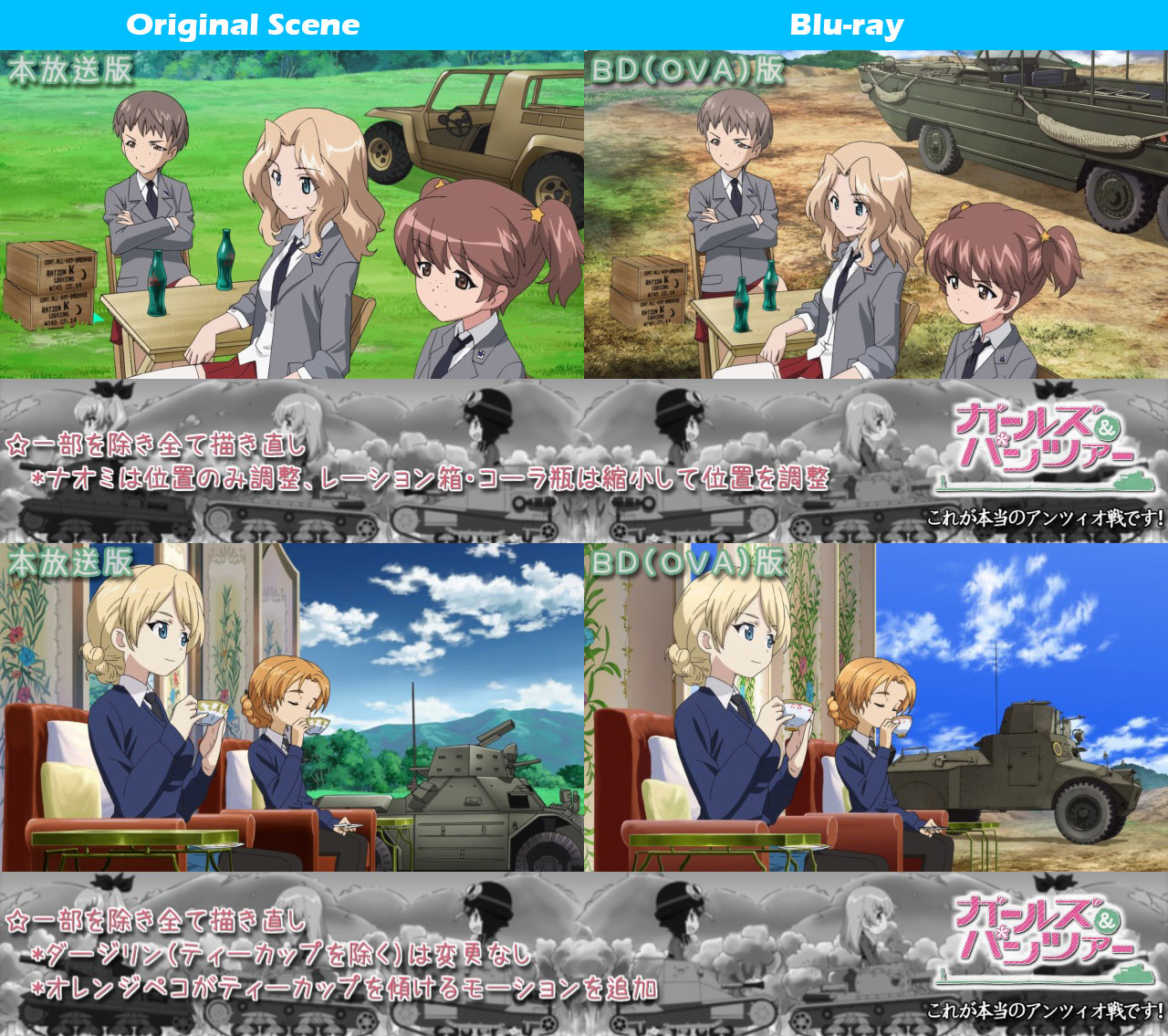 The next bonus comparison is about the process where animators visit real life locations to take pictures to be used as background references in their anime. The Girls und Panzer anime is set in Oarai Town, based on the real world version of Oarai, in the Ibaraki Prefecture, Japan. The bonus showcases two scenes that were molded after the real version of Oarai, to the right, in the anime, to the left. 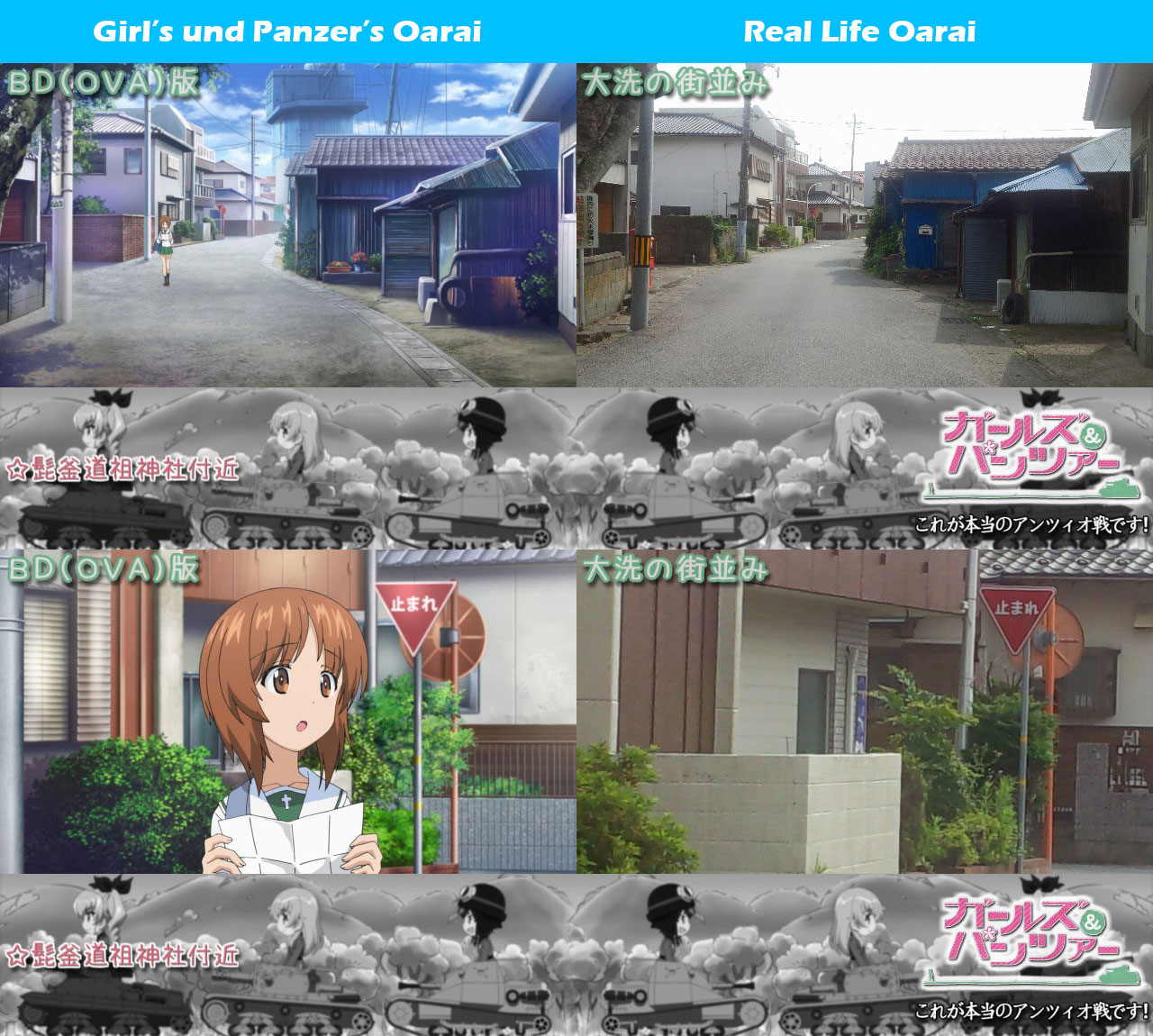 The last bonus comparison image is of the series paying an homage to a 1979 anime film directed by Hayao Miyazaki. The chase scene in Girls und Panzer: Kore ga Hontou no Anzio-sen Desu! is an homage to Lupin III: The Castle of Cagliostro, Miyazaki’s debut directing role and one of the industry’s most influential anime.

Here is a video comparison between the PV and Blu-ray versions of Girls und Panzer: Kore ga Hontou no Anzio-sen Desu!, from QtQ at Niconico. The PV version is on the left and the Blu-ray on the right, and each scene has footnotes on what the differences are. If the video does not play click the following link: http://www.nicovideo.jp/watch/sm24142094

Girls und Panzer is an original anime series that aired from October 2012 till March 2013. The series is produced by studio Actas (Mermaid Melody Pichi Pichi Pitch Pure, Switch) and directed by Tsutomu Mizushima (Another, Shinryaku! Ika Musume). Four manga adaptations of the series were produced since 2012 and all of which are published by Media Factory. A light novel adaptation was also produced in 2012, as well as a video game based on the series that released on the PlayStation Vita in June this year. An anime film of Girls und Panzer is scheduled to release later this year; the first trailer of the movie released in July. 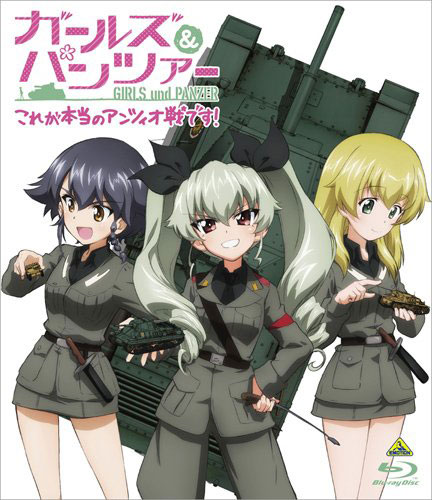 All images and footage comes from the Girls und Panzer: Kore ga Hontou no Anzio-sen Desu! OVA, which is now available on Blu-ray. Amazon Japan has the Blu-ray for purchase at ¥5,594 (~ $55.94 USD). The release also contains various other goodies.

So what do you think of all the changes made? And what are your thoughts about the OVA? Leave a comment below.