Update: The project has been revealed.

The official Twitter account of MF Bunko J has announced some news regarding Chuugaku Akamatsu and Kobuichi’s light novel series Hidan no Aria (Aria the Scarlet Ammo). The light novel print revealed that a new project would be announced this Summer, where a big presentation will be held.

Hidan no Aria is a light novel series written by Chuugaku Akamatsu with illustrations from Kobuichi. The series began in Media Factory’s MF Bunko J in August 2008. To date there are 16 volumes with the 17th volume releasing on the 28th, and the series has sold over 2 million copies. A manga adaptation began serialization in 2009 by Yoshino Koyoka. A anime adaptation aired from April 2011 till June that year, and was animated by J.C.Staff. An OVA followed the series in December 2011. 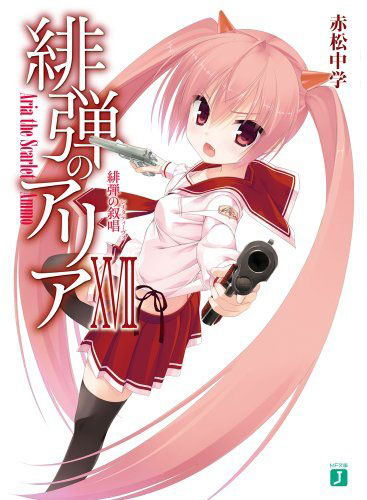 The new Hidan no Aria project, whether it is a new light novel, or anime, will be announced next season.