One of the more curious anime from 2012 was Kyoto Animation’s (Amagi Brilliant Park, Chuunibyou demo Koi ga Shitai!) adaptation of Honobu Yonezawa’s light novel series Hyouka. The Blu-ray boxset of the entire anime has been reissued recently and a set of comparison images and video between the original broadcast and the Blu-ray release has been produced. Generally, the Blu-rays are better than the TV version, since studios have can reproduce scenes of the anime that may have been rushed to make schedules and deadlines. It is also the studio’s biggest avenue for profit. We have done a series of these TV and Blu-ray comparisons before so make sure to check them out here.

For the most part, many of the changes between the two versions are minor, ranging from small visual errors, text changes and the removal of credits from various scenes. Regardless, it is nice to see what the animators catch when reproducing the anime for the physical release.

Note: There are Spoilers for all episodes of Hyouka 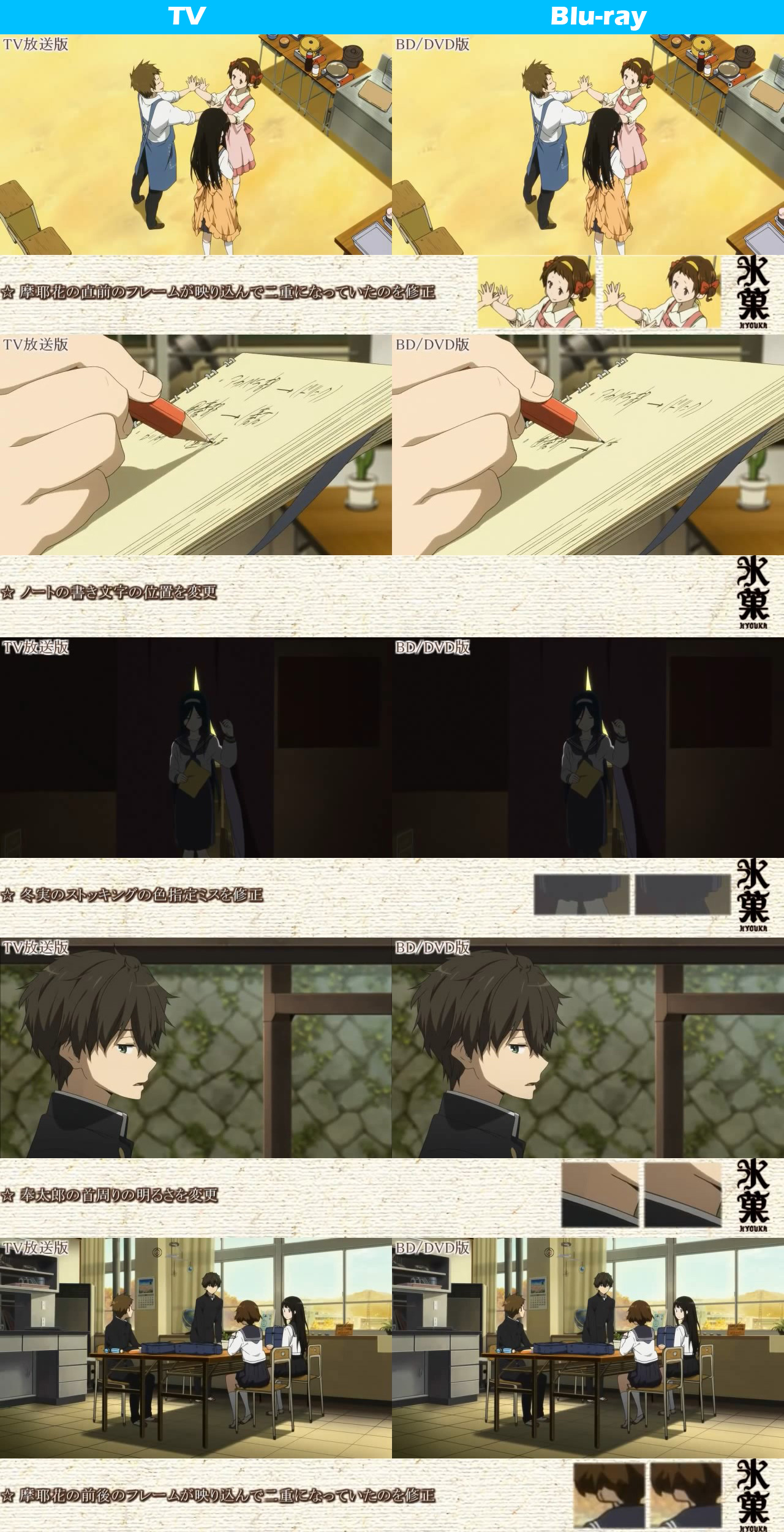 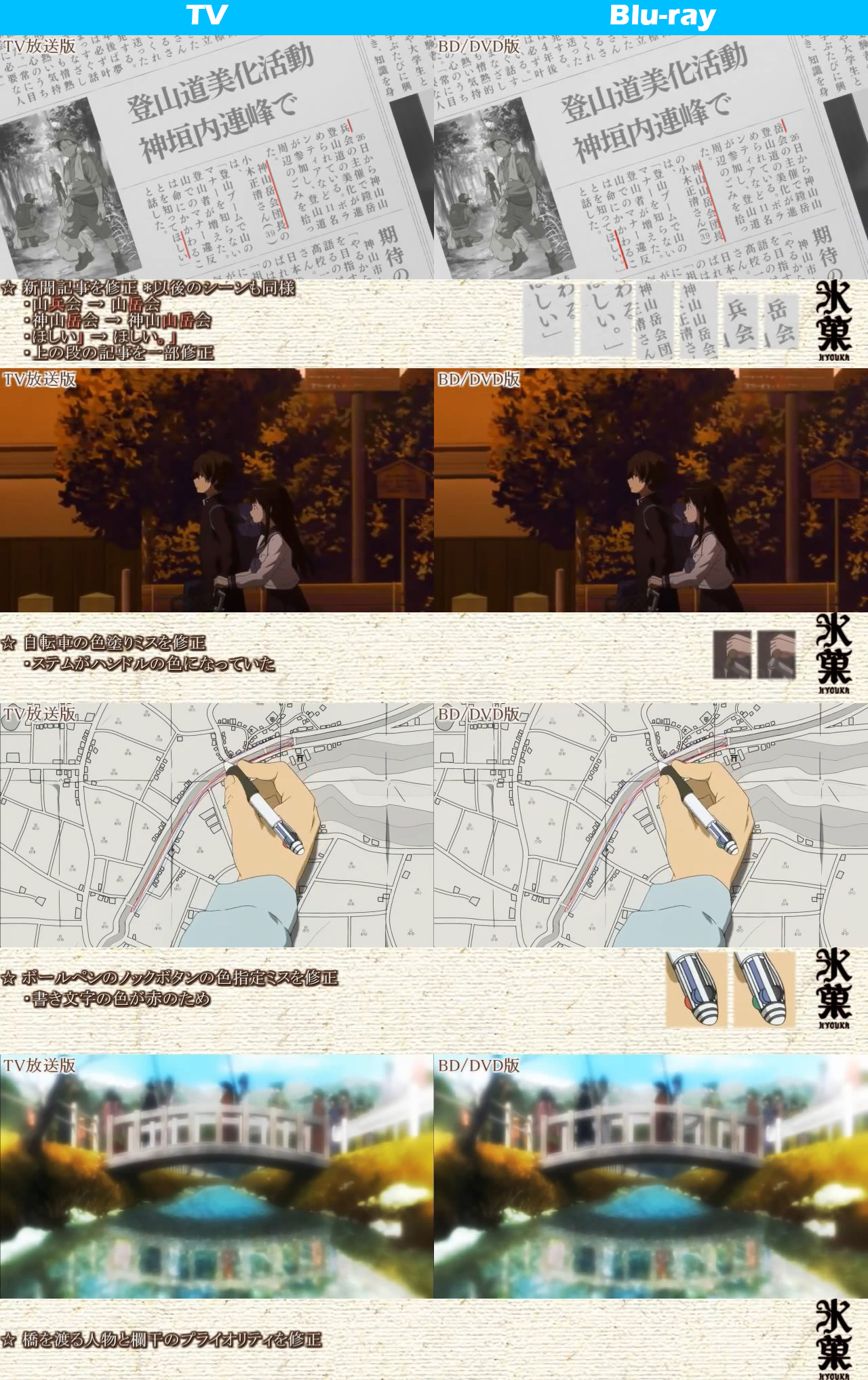 All of the images are from a series of videos produced by Niconico user QtQ. Here is the Youtube version of the comparisons, so you can see them in motion.

Hyouka is a mystery novel written by Honobu Yonezawa that released in 2001. The novel is the first novel in the Classic Literature Club series, currently containing 5 novels in total all of which are published under Kadokawa Shoten’s Kadokawa Sneaker Bunko imprint. The novel received a manga adaptation in early 2012 by Taskohna and also received an anime adaptation that aired for 22 episodes that year. The anime was directed by Yasuhiro Takemoto (The Melancholy of Haruhi-chan Suzumiya, Amagi Brilliant Park) and animated by Kyoto Animation (Amagi Brilliant Park, Chuunibyou demo Koi ga Shitai!). An OVA was bundled with the third volume of the manga.

Oreki Houtarou is a minimalistic high school boy. One day, he joins the Classic Literature Club at his elder sister’s request.

There he meets Chitanda Eru, Fukube Satoshi, and Ibara Mayaka. Chitanda is a calm beautiful girl but she turns into an embodiment of curiosity once she says, “I’m interested in it.” Fukube is a smiling boy with a fantastic memory who calls himself a database. Ibara is a short girl and is strict with others and herself.

They begin to investigate a case that occurred 45 years ago. Hints of the mystery are buried in an old collection of works of the former members of Classics Club. The collection is titled “Hyouka.” 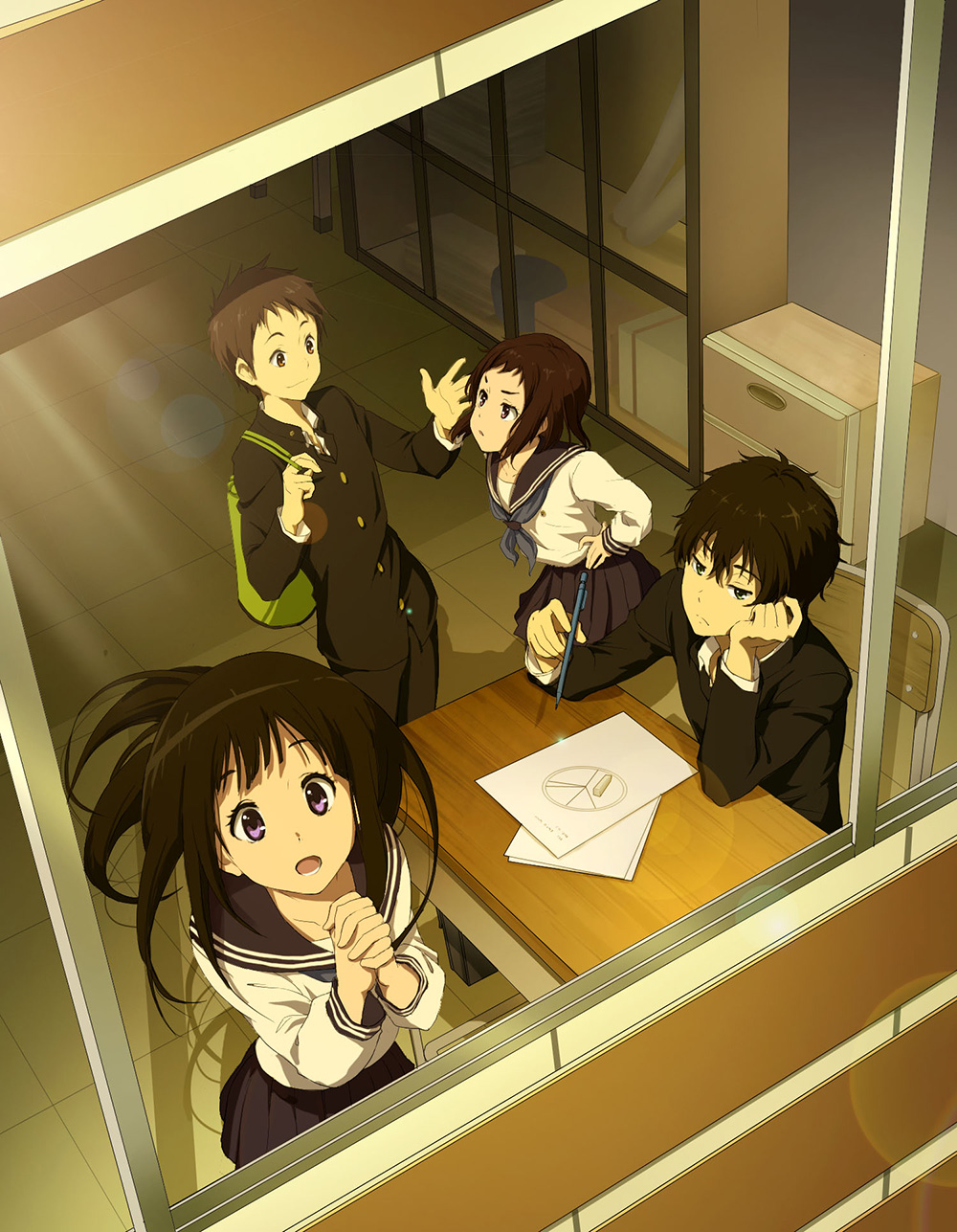