During today’s livestream on the upcoming multimedia projects of Reki Kawahara’s Sword Art Online, it was revealed that an announcement regarding the series will be made on New Years Day, January 1st 2017. It will occur after a NicoNico rebroadcast of the anime. 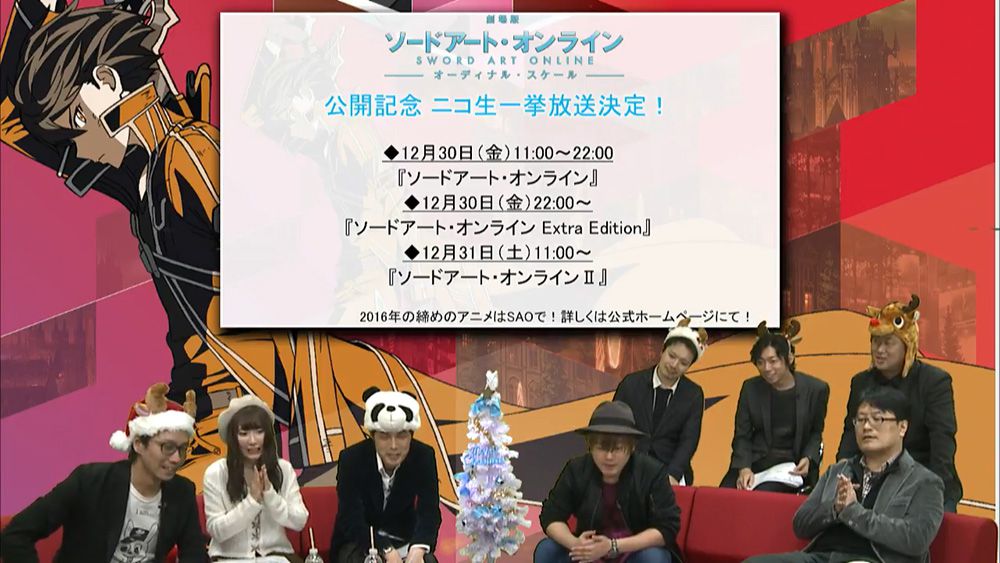 A similar occurrence happened at the end of 2013 following the broadcast of Sword Art Online: Extra Edition where the second season was announced on January 1st, 2014.

You can view the full live stream on Bandai’s channel here:

In addition to the rebroadcast, there will also be an original film Sword Art Online the Movie: Ordinal Scale, which is set to release worldwide on February 18th, 2017.

The film will feature the new AR-VMMORPG Ordinal Scale that utilises the new Augma Augmented Reality device. Players rank up in the game by defeating monsters and using special items.It will have an original story, not adapting of Kawahara’s any previous work; it will be set after the Mother’s Rosario arc, which was the third and final arc to be animated in Sword Art Online II.

And here is the second full trailer, which introduces the new game and AR technology and the new characters that will debut in the film:

Sword Art Online is a light novel series written by Reki Kawahara and illustrated by abec, who also is the author of Accel World. The light novel series began in 2009 being published in ASCII Media Works’ Dengeki Bunko. To date a total of 17 volumes have been compiled in the series. Since the series’ debut, the series has sold over 19 million copies, with 12.5 million sold in Japan alone. Additionally in 2012, an anime adaptation was released. The Sword Art Online anime aired in July and was produced by A-1 Pictures, which received a large reception; it was followed by a recap film and a second season. Since then, the series has appeared on a plethora of media with international merchandise, various manga adaptations of the light novel’s arcs, and video games. In addition, Kawahara has relaunched the series as Sword Art Online: Progressive, a re-release of the light novels with additional content. An original anime movie is in production for February 18th, 2017.

A Sword Art Online announcement will be made on January 1st on NicoNico following the rebroadcast of the anime’s first season, OVA and second season. The original anime film, Sword Art Online the Movie: Ordinal Scale will release worldwide on February 18th, 2017.