During Fuji TV’s latest livestream event, the television network announced that the second season of the anime adaptation of Fumiaki Maruto and Kurehito Misaki’s Saenai Heroine no Sodatekata (Saekano: How to Raise a Boring Girlfriend) light novel series will be airing next April. A year long wait. 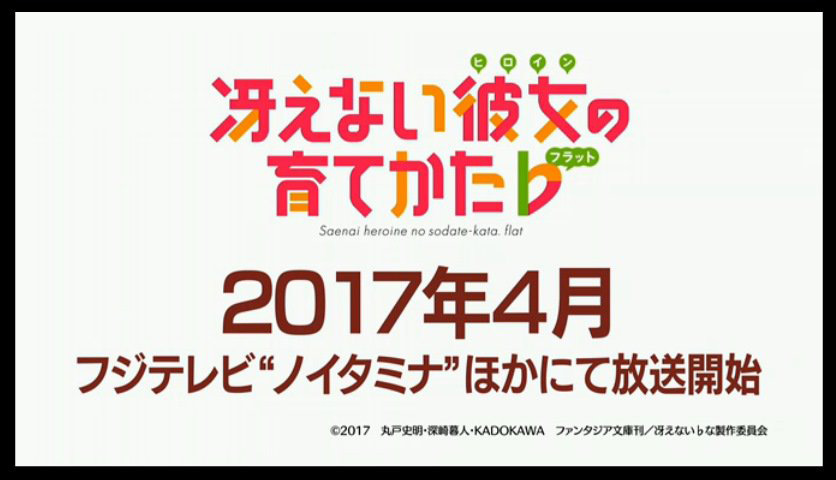 It was earlier announced that the production staff of the first season will return in the second:

Saenai Heroine no Sodatekata (Saekano: How to Raise a Boring Girlfriend) is a comedy, drama and romance light novel series written by Fumiaki Maruto and illustrated by Kurehito Misaki. The series began in 2012 in Fujimi Shobo’s Fujimi Fantasia Bunko imprint where a total of 8 compiled volumes have been published to date. The series also received three manga adaptations in 2013 from different artists and publications. The first main adaptation began in January in Fujimi Shobo’s Monthly Dragon Age magazine by Takeshi Moriki, the second is a spin-off titled Saenai Heroine no Sodatekata: Egoistic-Lily from Niito and was published in Kadokawa Shoten’s Young Ace magazine from February till May for 3 volumes last year. The third adaptation, titled Saenai Heroine no Sodatekata: Koisuru Metronome, began in August 2014 in Square Enix’s Big Gangan magazine. An anime adaptation of the series was produced for the Winter 2014/2015 anime season by Kanta Kamei (Usagi Drop, Ore no Kanojo to Osananajimi ga Shuraba Sugiru) and A-1 Pictures (Aldnoah.Zero, Sword Art Online).